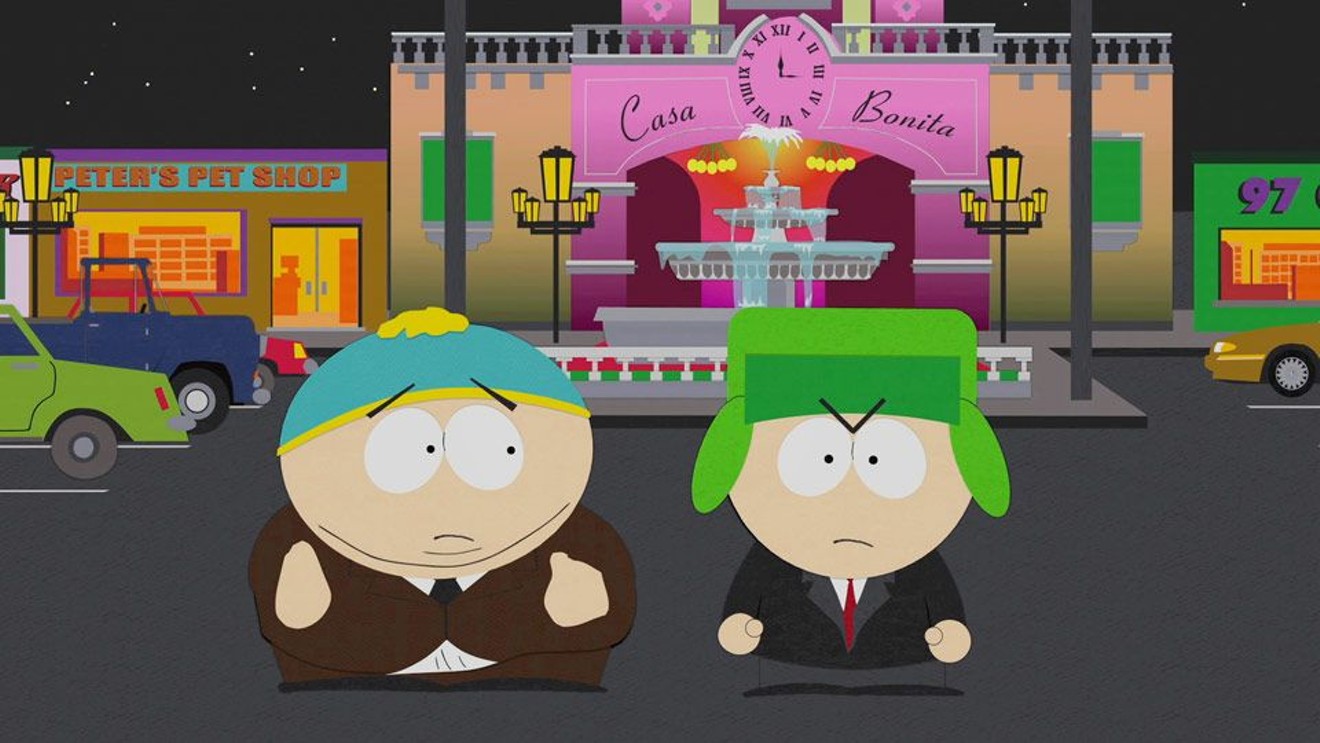 South Park
The news broke this week in the Hollywood Reporter: Trey Parker and Matt Stone, the creators of South Park who devoted a 2003 episode to Casa Bonita, are actually interested in taking over the place — something fans of both Casa Bonita and South Park consider a match made in heaven.

“We are absolutely trying to buy it,” Parker told the Hollywood Reporter. “We are going to do everything we can. We want to make it right and make it amazing.”

In their comments on the Westword Facebook post about local-boys-made-good Parker and Stone possibly taking over Casa Bonita, readers agree that it could be amazing. Says John:


The fact that they are is a good thing for Colorado natives who grew up going there and have fond memories of the restaurant. They plan to bring it back to its former glory and update the menu if it all goes to plan. For the sake of any true Casa Bonita lover and anyone like me who has very fond and dear memories of going there as a child, I admit I still do just for the nostalgia. I would like to see this happen.

This is the perfect solution. Their food is a joke, so who better to own the place?


This place is trash. Let’s not bring it back.


How about we make it better?


That would be awesome, and plus they could make a South Park museum out of it also.


Thing is, these guys know that — except for the sopaipilla — the food is crap!!!! They improve the food, I might go back. Otherwise, I won't waste the $20.


It's a rite of passage. I had my seventh birthday party here. But even if you're not from the Denver metro, live here long enough and you will come here.

Growing up in the southwest corner of Colorado, I didn't know much about my own state's capital. We got our TV news out of Albuquerque. But we also got the magazine Colorado Rancher and Farmer, probably not by choice. Casa Bonita advertised in that magazine, often taking the back cover. Whatever else I knew about Denver, I knew that was where Casa Bonita was, that it had a garish pink tower (um, okay) and that it had cliff divers (COOOOL!). Why go to Denver, if not to go to Casa Bonita? In short, to a fellow rural Coloradoan, Cartman's worship of Casa Bonita makes complete, almost cathartic sense.


The best description I've ever heard of Casa Bonita was from a Westword article. "It's like Disney had sex with Tijuana and left the goofy-looking bastard to fend for itself in a random strip mall on Colfax."


No wonder the creators of South Park want to buy Casa Bonita! What do you think about that possibility? What changes would you like to see there? Post a comment or share your thoughts at [email protected]
KEEP WESTWORD FREE... Since we started Westword, it has been defined as the free, independent voice of Denver, and we'd like to keep it that way. With local media under siege, it's more important than ever for us to rally support behind funding our local journalism. You can help by participating in our "I Support" program, allowing us to keep offering readers access to our incisive coverage of local news, food and culture with no paywalls.
Make a one-time donation today for as little as $1.