A bowl of samples of the sriracha-flavored On Tap Kitchen Pretzels. Linnea Covington

It's summertime, and already the picnics, hikes, campouts, poolside meetups and other warm-weather romping have commenced. So you'll need lots of snacks and drinks to help keep the parties going. Colorado has plenty to offer in this department, including cocoa-dusted nuts perfect for packing on a hike, canned cocktails made for covert outdoor concert sipping, and tasty hummus that can be part of just about any picnic. These ten Colorado-made treats will keep everyone happy as you take in sun, nature and fresh air.

Bolder Tortilla chips, made with blue corn from a Colorado Ute reservation.
Linnea Covington
Bolder Tortillas Native American Corn Chips
Everyone needs some chips for superb snacking, and these dark-blue crisps have just the right amount of salt and can hold up to salsa or hummus with grace. Each batch is made in Boulder with blue corn from a Ute reservation in southwestern Colorado. This unique grain imparts a slightly sweet and earthy taste, with far more flavor than your run-of-the-mill supermarket tortilla chip. Bolder Tortillas can be found at various farmers' markets around town and at some small specialty grocers like Natural Grocers and Lucky's Markets. Chiporro Sauce Co.'s uchu hot and rocoto hot sauces, which you can buy online, in specialty stores and at select farmers' markets.
Linnea Covington
Chiporro Sauce Co. Uchu Hot
Everyone needs a little hot sauce in their bag, especially if you're a heavy hitter on the picnic and barbecue circuit. The Uchu Hot is a favorite as it combines aji amarillo chiles, onion, garlic, vinegar and huacatay, also known as Peruvian black mint. It's smoky, sweet and spicy — and definitely a conversation starter. The hot sauce was created by chef Carlos Ruiz, who has previously worked at the Corner Office Restaurant, the Stanley Hotel in Estes Park and Boulder's Auguste Escoffier School of Culinary Arts. His talent and dedication to this passion project can be tasted in all six of his hot sauces. Find the goods now at the Union Station Farmers' Market, Savory Spice Shop, Mondo Market inside Stanley Marketplace in Aurora, and other specialty shops. You can also order it from the Chiporro website.

Peppered elk jerky made by Climax Jerky.
Climax Jerky
Climax Jerky
Don't be that jerk who forgot to pack a protein snack for a scramble up your next fourteener. Climax Jerky proves the perfect food for those looking for something light, tasty and full of energy-giving nutrients and calories. The Comai family started the business almost twenty years ago on top of Fremont Pass, right across from the Climax Mine (hence the name). While you might not frequent that spot, chances are you've spotted Climax Jerky at Denver International Airport and sampled beef, buffalo, elk, wild boar, duck, venison, turkey and salmon jerky before committing to a whole bag. The proteins come seasoned in a variety of flavors, and there are even gluten-free versions. Buy it at DIA before or after a flight, at the Fremont Pass shop this summer or on the Climax Jerky website.

Colterris Winery now cans its wine, dubbing it Canterris.
Colterris Winery
Colterris Winery Canterris Canned Wine
High-end wine in a can might be one of the smartest moves this Palisade winery has made. You can pack it in your camping cooler or pop a koozie on it at the park. And since there's no glass, it's safe to drink by the pool. All of the grapes found in this winery's vino are grown in-state, so you can carry your Canterris can with Colorado pride. Imbibers can choose from a red blend, a white blend and a rosé made from cabernet sauvignon grapes. Look for it at liquor stores around the city. 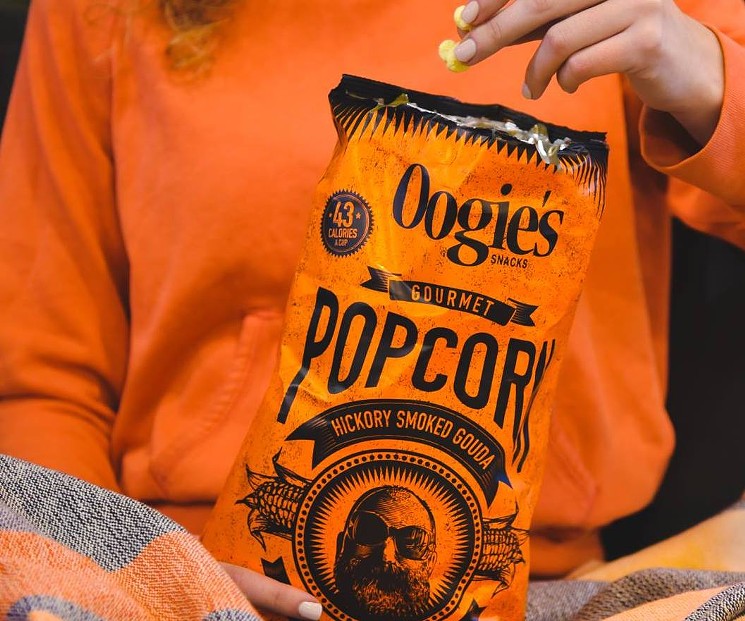 A bag of tasty hickory smoked popcorn by Oogie's.
Oogie's Gourmet Popcorn
Hickory Smoked Gouda Popcorn From Oogie's Gourmet Popcorn
A bag of popcorn proves an admirable and portable snack for outdoor movies, concerts and parties. Created more than fifteen years ago, Oogie's Popcorn comes in several flavors. We dig the Hickory Smoked Gouda for a popcorn-meets-barbecue extravaganza, but the down-to-earth Movie Time Butter or Original Kettle Corn are crowd-pleasers, too. Oogie's uses all-natural, non-GMO and gluten-free ingredients, and it's fairly healthy, to boot. Oogie's comes in big bags or snack-sized packs for the little ones, and the company also sells its spice blends by the jar so you can shake the flavor onto your own popcorn (or whatever else sounds good).

The kale pesto hummus by Boulder-based Hope Foods.
Hope Foods
Hope Foods Hummus
Hummus has long branched off from the traditional chickpea, tahini and lemon formula. But Hope Foods, which started as a small farmers' market operation in Boulder, has made creativity its calling card. Try the Buffalo Bleu; it's spicy and hearty and completely dairy-free, despite the name. The Lemon Peppercorn is another favorite that goes so well with veggies, so you can dip your way through the season's freshest. Others include Spicy Avocado, Kale Pesto and Black Garlic, all great and a step up from the usual stuff.

Espresso and cocoa almonds by Nanga by Nature.
Linnea Covington
Nanga by Nature Cocoa-Dusted Nuts
The resealable pouches of Nanga cocoa-dusted nuts are a natural for your hiking pack or swim bag. This Boulder-based company uses organic almonds and pecans, adds a thin coating of dark-chocolate powder and flavors them with a slew of tasty ingredients including cinnamon, Chinese five-spice, maple syrup and espresso. Not only do the chocolaty treats help boost energy after swimming or hiking, but they won't melt in the sun. Find the 1.75-ounce pouches at Alfalfa's Markets in Boulder and Lafayette, Nooch Vegan Market (10 East Ellsworth Avenue) in Denver, and select Vitamin Cottages and Sprouts Farmers Markets in the metro area.

On Tap Kitchen Pretzels at the Union Station Farmers' Market.
Linnea Covington
On Tap Kitchen Pretzels
Like many great ideas, the decision to start making gourmet, German-style pretzels came while drinking beer. The problem wasn't with what they were guzzling, founders Spencer Stackhouse and Ian Blasco thought, but what was missing in the food category. By 2015 the Boulder pair had started peddling their own bar food: snack-able pretzel bites in flavors like honey mustard, sour cream and onion, sriracha, and cinnamon sugar, all packed with as many Colorado-sourced ingredients as possible. Now they have their own operation in Broomfield and are quickly expanding. Pick up a pack in various grocery stores, the Boulder and Union Station Farmers' Markets, and at breweries and cafes such as Seeds Library Cafe in Boulder, Renegade Brewing Company and Baere Brewing Company.

All three cocktail flavors by Wheel House Canned Cocktails.
Linnea Covington
Wheel House Canned Cocktails
Wheel House mixes up cocktails you can covertly consume during that super-hot summer picnic or other outdoor happening. Former barman Quinton Bennett has developed a super-tasty tipple in a convenient aluminum can, so you can enjoy a cold and crisp mixed drink with no need for glassware or shakers. There's no need to brown-bag it, since the slender, elegantly decorated cans don't look like beers. Try all three of the flavors: gin with grapefruit, lime and mint; vodka with black tea and thyme lemonade; and vodka with mint, cucumber, elderflower and lime. You can find cans from the Denver-based company in most local liquor stores.
KEEP WESTWORD FREE... Since we started Westword, it has been defined as the free, independent voice of Denver, and we'd like to keep it that way. With local media under siege, it's more important than ever for us to rally support behind funding our local journalism. You can help by participating in our "I Support" program, allowing us to keep offering readers access to our incisive coverage of local news, food and culture with no paywalls.
Make a one-time donation today for as little as $1.