Fried Chicken and a Fifth Anniversary Celebration at the Dive Inn

Five years is just a brief moment in Broadway's bar history. Westword
Five years might not seem like a long time, but it's definitely a milestone for any new business in this town, where the food and drink scene competition gets fiercer every day. The Dive Inn has enjoyed staying power over the past half-decade as a neighborhood fixture catering to the booming Washington Park and Platt Park neighborhoods. Known for cheap drinks, a motorboat in the bar, tons of fun events and specials and a dog-friendly patio, the Dive Inn was even voted, along with Don's Club Tavern in a rare tie, the Best Dive Bar in our 2017 Best of Denver Readers' Choice poll. (Despite the name, it's not really a dive bar in my book, but that could be a whole other article.)

To celebrate the anniversary, owner Jason Tietjen, never one to get complacent, has a lot going on this summer, starting with Cinco de Mayo — the actual date the bar opened five years ago (that's Friday, May 5, for those of you a little rusty on your Spanish). Tietjen and friends are throwing an impressive shindig this year: The back seating area of the bar will get cleared out to form a stage for local ’80s metal cover band Mr. Steak, playing as "Carne Asada" to fit with the Mexican theme of the celebration. Opening up for Mr. Steak, who will be on stage at 9 p.m., is a group of thirteen guys going by the name "Juan Dirección" who will don mariachi outfits and lip-sync a few tunes. If that isn't enough to tempt you to come over, there will also be a Herradura Tequila liquor luge, "adult piñatas" filled with condoms, mini bottles of booze and other random items, and various drink specials.

Coming soon is the Dive Inn's community garage sale series, which will run on the last two Sundays in May and June. Tietjen invites regulars, staff and neighbors in the area to bring items to sell in a big yard sale at the bar. So if you love a rummage sale but bemoan the fact that most of them lack booze, this might be your solution.

If you're looking for something that doesn't involve other people's VHS tapes and rice cookers, the Dive Inn will also hold several more events, including a crawfish boil on June 10 with drink specials and live music, and "Dog Days of the Dive Inn" on June 24, a benefit for the Denver Dumb Friends League sponsored by Jack Daniel's. From 11 a.m. to 5 p.m. that day, it will be a dogs-and-drinks extravaganza in the parking lot with tons of dog-related vendors, Jack Daniel's barrels (with proceeds of the first 100 drinks sold going to charity), and a photo-booth truck where you can take a picture with your dog and a Jack Daniel's bandanna and compete to win a "Best in Show" prize. My dog and I will be fierce competitors, so bring your A-game if you want a chance at that one. Don't have a dog? There will be adoptable pets from the Dumb Friends League on hand at the event so you can fix that problem.

There are a few recent upgrades worth noting as the bar approaches its anniversary. For starters, the bar now stocks 99 tequilas, or has "99 problems and a tequila ain't one." For fans of the famous in-bar boat, Tietjen has plans to add a glass bottom by installing a screen playing his own dive footage of undersea creatures for bar patrons to enjoy — because drinking in a glass-bottom boat is better than drinking in a regular boat. You can even rent the boat for weddings and get married in it. Tietjen is actually a minister with the Universal Life Church and has officiated 24 weddings so far, with more coming up this summer.

Also coming soon is a new mobile-app loyalty program, so watch for even more ways to keep things cheap and boozy soon. In addition, there is even more Dive Inn gear to wear, if that's your thing. There are now over fifty different types of items for sale, such as Dive Inn hats, shirts, baby onesies and skateboards. Maybe you shouldn't get your baby the onesie and the skateboard all at once — you have to pace yourself.

Your one-stop shop for Dive Inn branded hats and baby clothing.
Sarah McGill
But perhaps the most significant recent development is a new menu in partnership with Rachel Tremaine, owner of Cluck Chicken. Tremaine's chicken-slinging was previously confined to a food truck — the Cluck Truck, for those who remember it — but the truck is currently for sale, and she's going brick-and-mortar by renting the Dive Inn's kitchen. Cluck Chicken at the Dive Inn opened this February just in time for the Super Bowl. Tremaine, who used to work in the beer and wine distribution industry, lost her job and went to culinary school, and soon after, the Cluck Truck was born. For four years, her chicken and Southern-style sides got plenty of compliments around town on the brewery food-truck circuit. Now she's open for dinner and bar grub from 4:30 to 9:30 p.m. Tuesday through Thursday, 11:30 a.m. to 10 p.m. Friday and Saturday, and 11:30 a.m. to 8 p.m. on Sunday. Or, if you're too lazy to show up to the bar to get your chicken, you can order it to go through UberEats or GrubHub. Tremaine is hoping to get a weekday lunch started soon after she hires more staff. 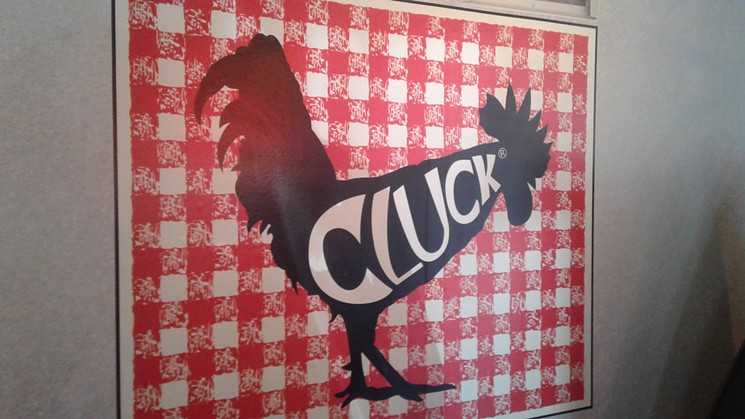 Cluck Chicken teams up with the Dive Inn to provide Southern fried foods for your bar munchies.
Sarah McGill
I had the pleasure of sampling some of Cluck's specialties: chicken fingers, homemade pickles and fries. Tremaine's homemade pickle juice is also a new addition to the Bloody Marys at the bar, and the jalapeño ketchup is spicy and delicious. But the chicken is really what it's all about, of course. The chicken fingers are super-moist from soaking in buttermilk before hitting the fryer, and the batter is peppery and has a nice, crispy texture. Tremaine is also about to go to battle with her chicken at the new Chicken Fight craft cocktail and chicken celebration on May 25.

As the Dive Inn approaches the five-year mark, I get the sense that the bar will be around for a while. With a constant stream of creative events, tasty and cheap drinks and the new and improved food offerings, the Dive Inn has a lot to offer its neighbors. And with the constant new residential construction in the area, there will be many more neighbors to meet. I suspect that Tietjen and his team at the Dive Inn will be celebrating long after this Cinco de Mayo.