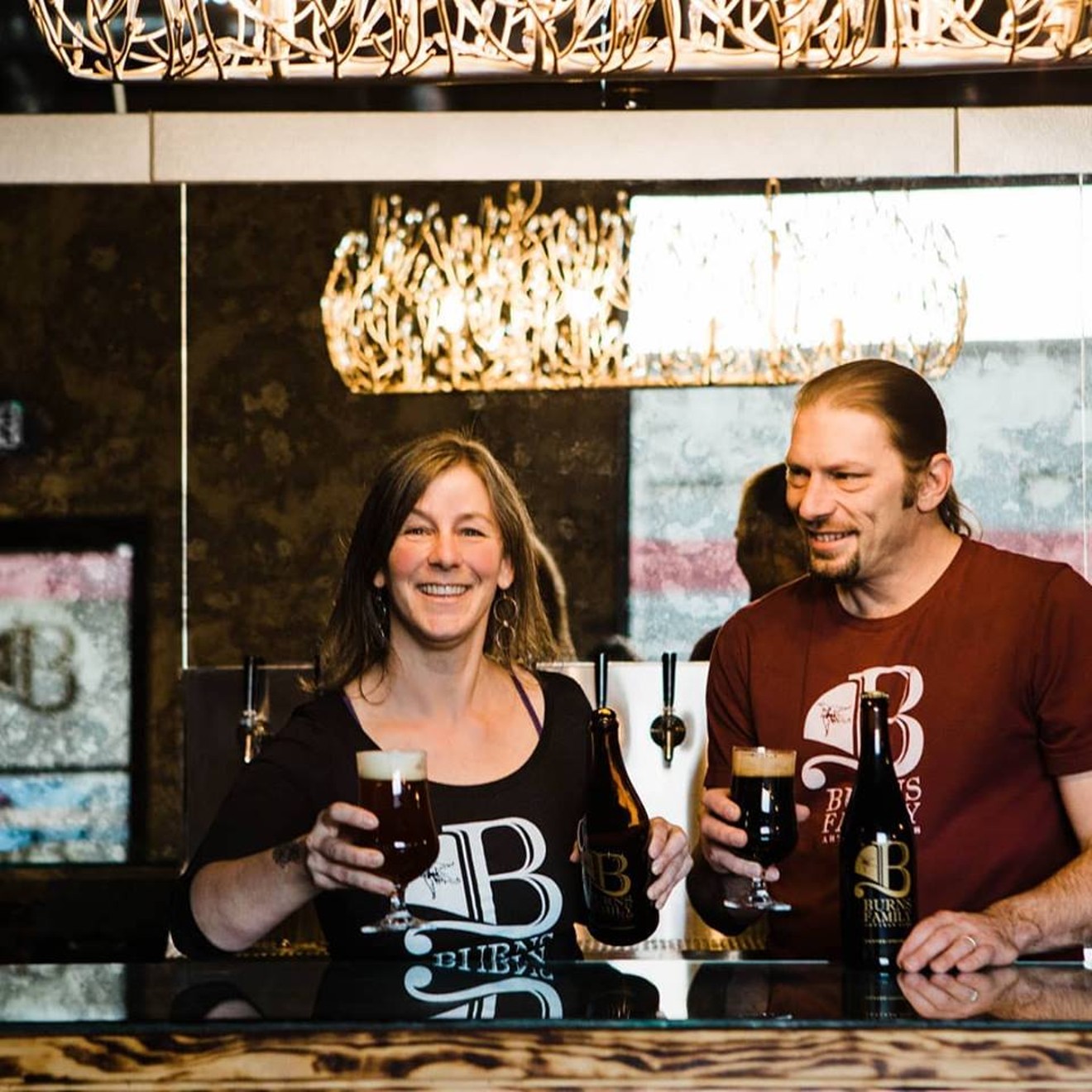 Laura Worley and Wayne Burns are the Burns Family. Burns Family Artisan Ales
Laura Worley enjoys watching the expressions on people’s faces change when they walk in the doors of Burns Family Artisan Ales. Many of them are former customers of Wit’s End Brewing, which previously occupied the same space. But Worley and her husband, Wayne Burns, have transformed the place drastically since they opened four months ago. “They usually stop and look around. You can really see them thinking about it,” she says.

The couple moved in earlier this year (Wit’s End closed in November 2017 and moved its beers and its brand in with Strange Craft Beer company, about a mile away), and they brought their own take on beer, on fun and on interior design to the business park at 2505 West Second Avenue.

For starters, they closed off a lot of the space and added a bar, couches and mood lighting, which creates a cozy clubhouse feel. They’ve also added a variety of games on Saturdays, when you can roll a seventeen-sided die to try your luck on beer deals; options include beer discounts or paying it forward by buying a beer for the next person.

For some, it's just a matter of finding the brewery. "We just need to be rediscovered," Worley says.

Jonathan Shikes
But the real tricks here are the beers. While some are somewhat traditional takes on recognizable styles, including a new lager named for the Valverde neighborhood, the rest are high-alcohol, high-gravity sensations like an 11 percent ABV Belgian-style quad, a 14.5 percent barleywine, and a variety of imperial porters, stouts and other styles. The next beer to be tapped is Auld Lang Syne, a brandy-barrel-aged 16.5 percent ABV Barleywine, which will be released at 6 p.m. in bottles and on draft on New Year’s Eve.

And those are the beers that warm Burns and Worley’s hearts.

A professional brewer for more than two decades, Burns spent time in Michigan, at Kuhnhenn’s Brewing and Bell's Brewery, and, after moving to Colorado, at the Vine Street Pub & Brewery. In 2013, he and two friends founded Jagged Mountain Craft Brewery, but Burns left after a falling-out with his partners, taking jobs first at Wynkoop Brewing and then at Holidaily Brewing in Golden. Worley, meanwhile, has worked at several restaurants and breweries, most recently as the taproom manager at Woods Boss Brewing in Denver.

Jonathan Shikes
Many of their high-gravity beers have a sweetness to them, along with a complex mix of flavors — some even masquerade as pastry stouts — but rather than use outside ingredients or flavorings, Burns says he likes “to pull all of his flavors out of the malt, the hops, the yeast and the water.”

To help customers make choices, all of the beers are clearly marked with alcohol content on the menu — and are arranged into tiers. Tier 1 includes beers under 6 percent ABV, like the lager and a straightforward porter. Tier 2 is for beers between 6 and 8 percent ABV, like a New England-style IPA. Tier 3 moves things up to the 10 percent range, and Tier 4 beers boast ABVs of 10 to 14 percent. Tier 5 is for the big dogs, 14 to 17 percent.

Burns and Worley can also help you choose, since so far, it’s just the two of them working the taproom. “But that’s also good,” Worley says. "That’s how we see all of our customers and connect with our community.”
KEEP WESTWORD FREE... Since we started Westword, it has been defined as the free, independent voice of Denver, and we'd like to keep it that way. With local media under siege, it's more important than ever for us to rally support behind funding our local journalism. You can help by participating in our "I Support" program, allowing us to keep offering readers access to our incisive coverage of local news, food and culture with no paywalls.
Make a one-time donation today for as little as $1.