The Magnet Inn Is One of a Dying Breed in Englewood

The Magnet Inn welcomes the neighborhood and concert-going crowd at 2893 South Broadway. Westword
A friend of mine recently moved to downtown Englewood — if that's a thing (I've always referred to her new area as "You know, down near the Gothic"). So we decided to set out on a Saturday night tour of her new stamping grounds and check out various Englewood neighborhood bars. From her new spot just a little bit off Broadway, we were able to walk to several newer, hipster-ish bars, including the Moe's Original BBQ that includes a bar and a bowling alley, and a few neighborhood dives like the Magnet Inn, at 2893 South Broadway. The Magnet was actually the last stop on our tour, so we were a few drinks in at this point, but the bar would have had its odd charms even if we hadn't been a little tipsy. Located on Broadway at Bates Avenue next to a brightly lit liquor store, the Magnet Inn looks rather unassuming from the outside, with a small black awning protruding from a red building with large block letters letting people know the name of the bar.

As we came in, smack next to the door was a guy in his fifties with his laptop on the bar, intently playing Candy Crush with the aura of a person who frequently plays computer games in a bar and doesn't care what anyone thinks about it. After passing him, we found a couple of seats at the bar next to some older guys, as well as a group of gentlemen in their twenties who told us they'd tried to go to the Aquabats show at the aforementioned Gothic Theatre a few blocks away. However, the show ended early because it was geared toward both adult fans of the band and child fans of the Aquabats kids' TV show, which apparently plays on Nickelodeon. (You learn something new every day.)

We also learned that the Magnet is a popular stop before and after any show at the Gothic, so the crowd can vary based on the band playing on any given night. 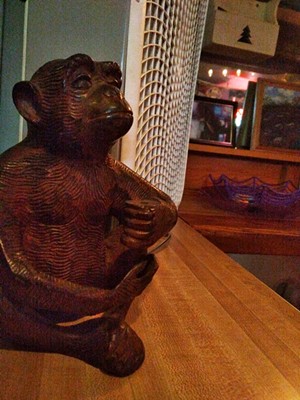 Just a monkey on the bar at the Magnet Inn.
Amanda Straw
Our new friends told us that they lived in the neighborhood, and that they love the Magnet because it's one of few remaining bars of its kind.

As Denver goes, so goes Englewood, and gentrification is in full force in the area, with new bars and boutiques opening up all over the stretch of Broadway between Yale and Hampden. So I felt like we should appreciate this old-school, simple bar filled with pool tables and posters of ’90s-era celebrities. Behind the bar, notable touches included a small Yankee candle burning brightly and attempting to give off a floral scent, a decidedly politically incorrect sign that said, "Low cut blouses are looked down upon in this establishment" with a corresponding picture to really drive home the joke about looking down women's shirts, and a candy bowl with a motion-activated skeleton that lights up and dances when the bartender waves his hand close to it. We also appreciated the small monkey statue perched on the edge of the bar, because it seems like the sort of thing that probably represented something or had a reason for being there, but no one knows why it's there anymore. After all, the Magnet has been a bar since the 1950s, and has been run by the current owner for more than twenty years, so some history might have gotten lost along the way.

"Comfortable" is a good word to describe the place. As we glanced around, things seemed to be in full swing, and it looked like everyone else felt at home as well, with crowds of friends playing pool and darts, and a good posse of older ladies and gents smoking clove cigarettes — and regular cigarettes — on the small patio. Several large TVs were playing random programming, but the amount of Broncos memorabilia and the bartender and regulars let us know that on days when there's football to be had, that's what those TVs are for. For day games, sometimes there's a lunch buffet as well as touchdown shots. Pool leagues and a weekday happy hour from 5 to 7 p.m. draw additional customers beyond the weekend. And this is another one of the dying breed of bars that opens early — starting at 7 a.m. every morning.

It's not uncommon for the Magnet to host small fundraisers to help a member of the bar family with things like medical costs or other challenges. But other than that, the calendar isn't particularly cluttered with events. There isn't really a calendar, anyway, and the Magnet doesn't have a website where one might find a calendar or anything like that. But word of mouth seems to be working, because the place stayed packed throughout the time my friend and I sat there chatting with her new neighbors and each other over cold beers. 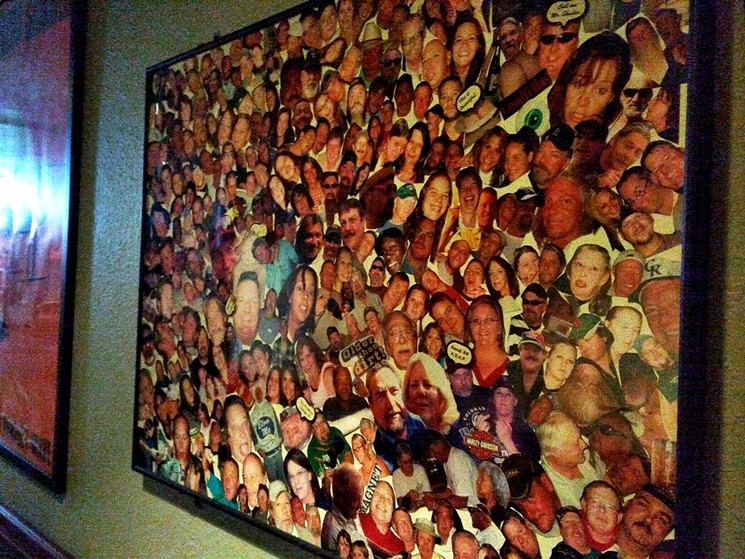 A photo collage pays homage to regulars and friends at the Magnet.
Amanda Straw
Food options at the Magnet are primarily chips, frozen pizzas and pickles from a huge jar behind the bar. I kind of wanted a late-night pickle, but I kept getting distracted and never managed to get one from the friendly but constantly busy bartender. But the conversation, sweet hip-hop jams emanating from the jukebox and Bud Light seemed to be enough somehow. As our night drew to a close and we began the walk back to my friend's apartment in the crisp night air, we considered our bar tour to be a success. Not least of all, we were glad to discover the Magnet Inn, one of the few old-school neighborhood bars in Englewood.