The Ten Best Craft-Beer Events in Denver in February

Stouts are the beer of the month at Vine Street Pub and other breweries. Brandon Marshall

With its short days and frigid nights, February can be a little dreary in Colorado. But not at Denver's craft breweries and taprooms, which know just how to warm things up. Although there are only 28 days, the month is absolutely packed with brewery anniversaries, celebrations, tappings and small festivals, all of which you can find in our weekly Beer Calendar, which is posted online every Wednesday. In advance of that, here are ten sure bets for the month ahead. 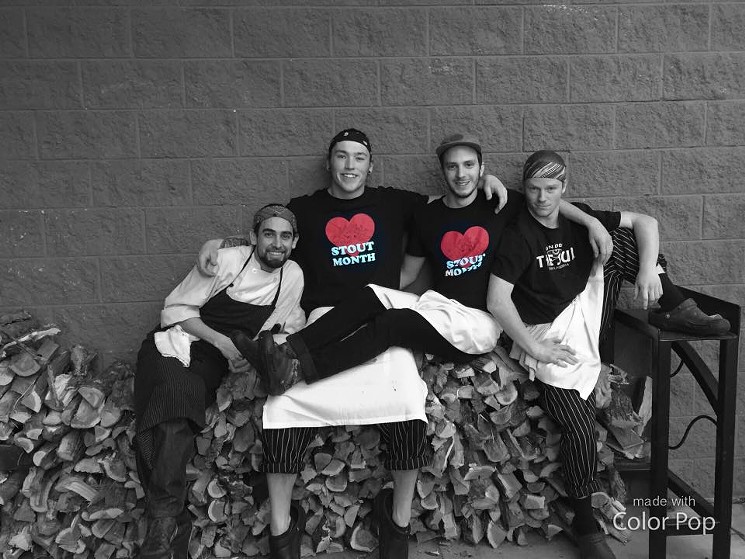 Mountain Sun Pub and Breweries
1. Stout Month
February 1-28
Vine Street Pub and other Mountain Sun locations
The 24th annual Stout Month kicks off again at Vine Street Pub, Mountain Sun and all of the other breweries and restaurants in Boulder and Longmont owned by the venerable Mountain Sun company. A dark and stormy love letter to this style of beer, Stout Month is a showcase not only only for the creativity and prowess of Mountain Sun's brewing staff, but for breweries around Colorado. This year's lineup includes around thirty different in-house stouts, including many returning favorites, such as Thunderhead, Trickster, Nihilist, Stoked Oak, Chocolate Dip, Oatimus Prime, Megatron and Girl Scout Cookie, as well as some new ones. But there will also be two dozen guest stouts on at different times. Vine Street and Mountain Sun typically don't release times or locations for various tappings, so you might have to visit more than once. Go to Mountain Sun's website to see the full list of beers that you should be enjoying.


3. Melvin Brewing 2X4 Day
Saturday, February 4
Multiple locations
Wyoming’s Melvin Brewing is once again celebrating its award-winning 2x4 IPA across the U.S. with 2x4 Day. "The swag, the hip-hop, the ninjas, and – of course – Melvin’s 2x4 will all be out to party," the brewery says. Oh, and the brewery will also have WWE Hall-of-Famer Hacksaw Jim Duggan — whose trademark is carrying around, yes, a two-by-four length of wood — helping out as spokesman. In Denver, there will be events at the Crafty Fox, Falling Rock, Finn's Manor and Hops & Pie. There will also be tappings at Backcountry Tap House in Boulder, Tap & Handle in Fort Collins, Brewer’s Republic in Colorado Springs, and the Jailhouse Craft Beer Bar in Buena Vista.

Ratio co-owner Jason Zumbrunnen is a barrel of fun.
Ratio Beerworks
5. Ratio Beerworks Anniversary Weekend
February 10-12
Ratio Beerworks
Ratio Beerworks will celebrate its second anniversary with several events, ranging from special anniversary beer releases to comedy and music. The weekend kicks off with a comedy show curated by in-house comedian Ian Douglas Terry. On February 11, the brewery will tap its anniversary beer, Continuous Thunder, a double IPA "showcasing Mosaic and Simcoe hops with bright tropical fruit aromas and ripe mango flavors," the brewery says. It will also tap a single sixtel of Loveless, "a beautiful, complex yet delicate, barrel-fermented Dark Sour Saison, which spent over a year in red wine barrels, before being re-fermented with raspberries. (Loveless will receive the full treatment on Tuesday, February 14, with a bottle release party.) At 8 p.m., Matt Pryor, frontman for the Get Up Kids, will hit the stage, followed by Dan Andriano of the Alkaline Trio and a live DJ set and dance party in the taproom. And finally, on February 12, Ratio will wind down with a Hangover Brunch featuring Bloody Mary beers from the Real Dill. Later that afternoon, Ratio will be part of a Valentine’s Day RiNo Love Triangle progressive beer and cider dinner with Epic Brewing and the Rackhouse Pub.

Falling Rock owner Chris Black always gets Younger in February.
Falling Rock Taphouse
6. Pliny the Younger Tappings
February 11 and multiple other days
Falling Rock Tap House and other locations
Falling Rock Tap House will host the first tapping on February 11 for Pliny the Younger, the rare and exceptional triple IPA from California's Russian River Brewing that has inspired a cult-like following over the past few years. Only a very few beer halls in Colorado get a keg of this beer (not to be confused with its uncle, Pliny the Elder) during February each year, but Falling Rock is always the first, and it always has the most. Falling Rock will tap Younger at 1 p.m., though the beer bar will open at 11 a.m., which is when it will start issuing tickets to people for a glass of the beer. There will be additional tappings on Sunday February 12 at Backcountry Taphouse in Boulder, Saturday, February 18,  and Sunday, February 19. For more details and for other Younger tappings in the metro area, see our post on where to get Pliny the Younger in Colorado in 2017.

River North Brewery
8. River North Brewery Fifth Anniversary Party
Saturday, February 18, and Sunday, February 19
River North Brewery
Five years ago, River North Brewery opened for business. The brewery has gone through a lot of changes since then — including a new location — but has reached this fifth anniversary milestone in grand style. And it plans to throw a fitting two-day birthday party, starting at noon February 18, by debuting two new IPAs and tapping various rarities. In addition, there will be a crawfish boil by Roaming Bull Brasserie (in addition to the regular menu) and live music from the Dollhouse Thieves from 4 to 6 p.m. The first IPA is Anniversary Ale 5, double IPA with Amarillo, El Dorado and Mosaic hops (bottles are $6, with a limit of one case per person). The second is Anniversary Ale 5 ¼, an "irresponsibly over-hopped" New England-style hazy IPA, brewed with late additions of Mosaic, Citra and Idaho 7. It's only on draft, but Crowlers will be available. There will be rotating rare tappings throughout the day, including Single Cask Mr. Sandman, Rum Barrel Quandary, Anniversary 4 ¼, Barrel Aged Nightmare Fuel and Whiskey Barrel Quandary. Then, on February 19, River North will host a Lock Up the Cellar Sale featuring other rare bottles, including God Complex, Shadowman and Father Time, Single Cask Mr. Sandman and regular Mr. Sandman. There will also be a bottle raffle benefiting Be the Change Volunteers, which builds, refurbishes, equips and trains schools and education centers worldwide. The Roadrunner New Mexican street-food truck will be on hand. Oh, and if you're not sure when you can make it down, buy a ticket for $25, the brewery advises, and "reserve two bottles of Anny 5, one Crowler of Anny 5 ¼, plus one pour of any beer on tap. Beer for ticket-holders will be reserved separately for pickup anytime Saturday or Sunday, even if we are sold out. Basically, if you buy a ticket, we will fill your Crowlers before the weekend and stash your bottles until you can get down here."

Roll out the firkins on February 18.
Bristol Brewing
9. 13th Annual Firkin Rendezvous
Saturday, February 18
Bristol Brewing, Colorado Springs
The Firkin Rendezvous is a celebration of cask-conditioned ale from more than forty Colorado breweries, and benefits the nonprofit Colorado Brewers Guild. "The cask conditioning of ales is a traditional British style of brewing that originated centuries ago, when publicans lived above their pubs and made a life’s work out of tending their beers," Bristol says. "Cask ales are fermented, dry-hopped, conditioned and served in a single cask, the firkin being the British cask size most commonly used." The Rendezvous takes place February 18 from 2 to 5 p.m. at Bristol Brewing, 1604 South Cascade in Colorado Springs. General admission tickets are $45 and include a souvenir glass and lunch. VIP tickets, $65, get you in an hour early and include everything above as well as a T-shirt. Get your tickets at ticketfly.com.

Things are going to get a little dark at Wiley Roots.
Wiley Roots Brewing Facebook page
10. Festival of Dark Beers
Saturday, February 25
Wiley Roots Brewing
Wiley Roots in Greeley will host its second annual Festival of Dark Beers from 6:30 to 10:30 p.m., featuring more than twenty experimental, small-batch or pilot beers that the well-respected brewery has made over the past few months. They range from a New England Style Black IPA to a Russian Imperial Stout aged in a Feisty Spirits Rye Whiskey barrel. There will also be two collaboration beers: S’Mores Stout, brewed with Cerebral Brewing in Denver; and Coconut Chocolate Stout, brewed with WeldWerks, also in Greeley (several dark beers from these two breweries will be on tap as well). General admission tickets, available at wileyroots.com/fodb, are $45 in advance ($50 at the door) and include unlimited sampling, three palate-cleansing beers and a commemorative tasting glass. VIP tickets, $60, get you in the door an hour early and also include access to exclusive beers and a meal coupon for $10 that can be redeemed at the on-site food truck. There will be live music from Troubadour Sound System.