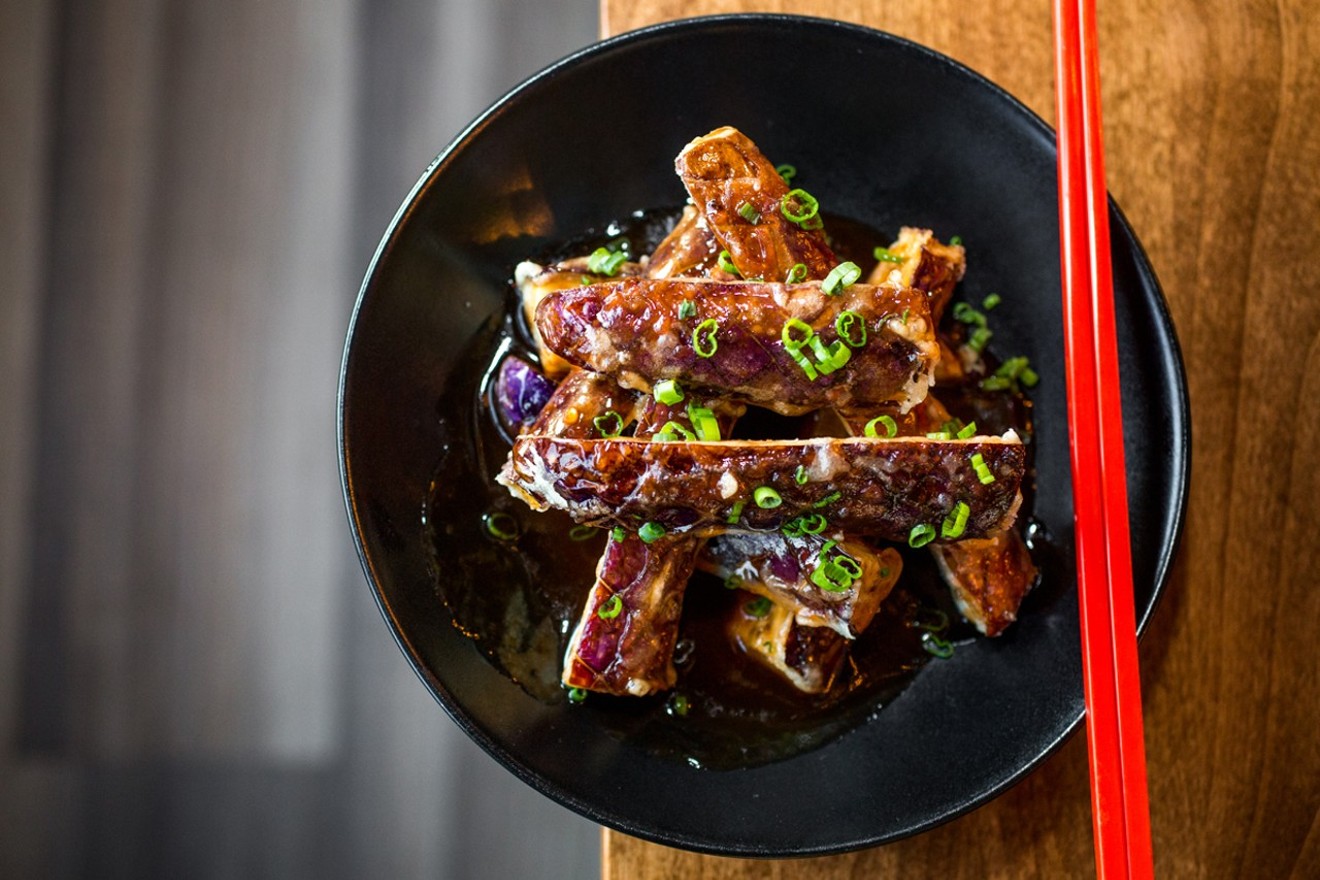 The fried eggplant at Q House really soars. Danielle Lirette
When I became the Westword restaurant critic in summer 2012, I knew there were many terrific meals ahead of me. What I didn’t realize was that my tenure would coincide with Denver’s Wild West boomlet and that my reviews would chronicle our city’s transformation. Food halls like Avanti, Milk Market and Denver Central Market weren’t even a twinkle in someone’s eye six and a half years ago. Union Station was a dilapidated train station, and Larimer Square was the hub of fine dining. Capturing just how much has changed is this snapshot from my review of the Populist, published on March 14, 2013: “Set on a dark stretch that looks deserted even though it isn’t, the Populist has been nudging diners to venture farther up Larimer.” Farther up Larimer! These days, that part of town wouldn’t look deserted even at 1 a.m. in a blizzard! (I’m only partially kidding.)

Growth has its downsides: rising rents, increased traffic, gentrification. But it also directly translates to more kitchens and more opportunities for chefs to wow us with their creativity. Here are the ten best dishes to come out of those kitchens this year, the majority at restaurants in parts of town that are unrecognizable from when I started the job: 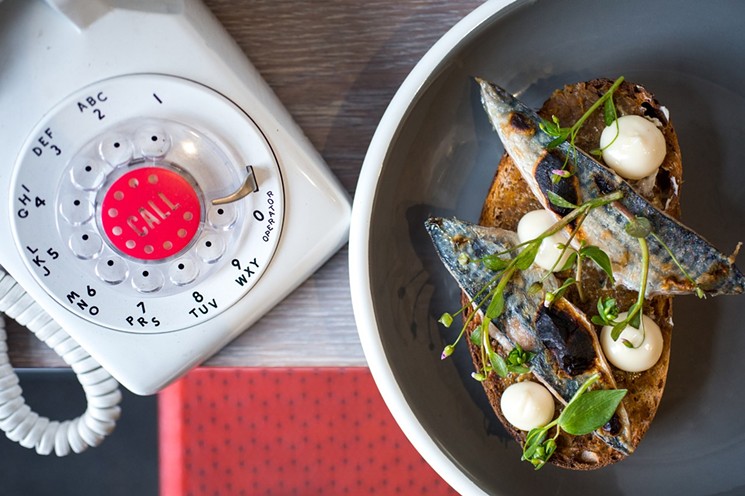 Mackerel tartine won fans at Call.
Danielle Lirette
Tartines at Call
2845 Larimer Street
Before this sliver of a restaurant was named one of the ten best new restaurants in the country by Bon Appétit, I was singing the praises of Call. I liked its Scandinavian leanings and cheeky decor, including tin-can phones shellacked bright orange and dangling from the ceiling. I liked its headlong embrace of little-known fare (aebleskiver, anyone?) that didn’t cater to the law of averages. And I liked — no, loved — its tartines. So much more than fancy toast, these smørrebrød — Danish open-faced sandwiches built upon dense, seeded rye — were distillations of the restaurant. The smoked mackerel with curried onions and droplets of garlic aioli was confident and bold. The feta, grapefruit and blueberry jam was refreshing and bright. The smoked mushrooms with thick, housemade ricotta, fresh parsley and mint was a seasonal hello. Tartines aren’t the only temptations at Call, but no visit here is complete without one.

Fried Eggplant at Q House
3421 East Colfax Avenue
Eggplant isn’t the easiest vegetable to cook; it soaks up too much oil and can be bitter if not properly prepped. But in good hands, this purple-skinned odd fellow can be transcendent, as it was at Q House, Chris Lin’s contemporary Chinese restaurant. Sliced into logs, the eggplant was dusted in potato starch and rice flour moistened with a cheffy splash of vodka and water. Hot from the fryer, it morphed into crackly batons, their savory, pudding-like flesh accented by gently sweet General Tso’s sauce. Lin has had years to perfect his technique: The son of Taiwanese immigrants, he worked at his parents’ Chinese-American restaurant growing up, then honed his chops at the Culinary Institute of America and at Ssäm Bar in New York. 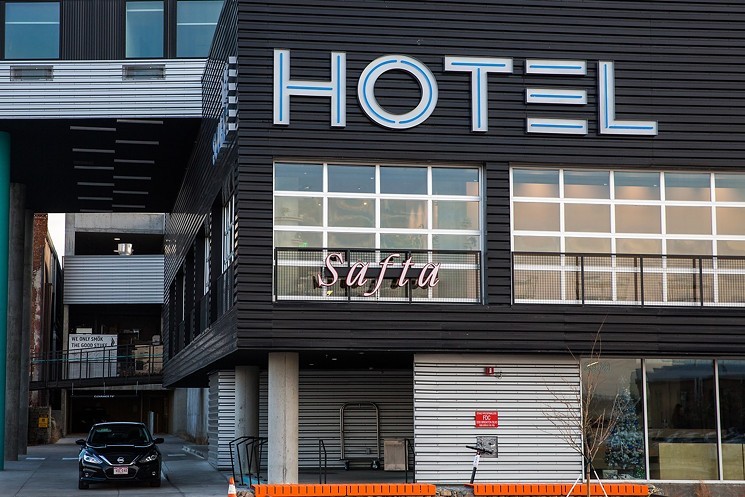 Safta at the Source Hotel.
Danielle Lirette
Malabi at Safta
3330 Brighton Boulevard
The little-known secret at Safta, the first effort beyond New Orleans for two-time James Beard award-winning chef Alon Shaya, is that dessert is every bit as spectacular as the hummus and wood-fired pita that kick off your meal. Pastry chef Liliana Myers has crafted a smart roster of sweets in keeping with the rest of the Israeli-inspired menu, but what captivated me most was the cool, silky pudding called malabi. Rather than having that cloying vanilla aftertaste so common in American sweets, this milk pudding was subtle and haunting, slicked with rosewater-scented syrup and topped with almonds and grapefruit sections. Accents vary with the seasons, but trust Myers to always come up with something inspired.

Dry-Aged Ribeye at Citizen Rail
1899 16th Street
Whether 100 percent grass-fed or grain-finished, whether served with béarnaise, chimichurri or just a thorough sprinkling of salt, great steaks have been a perk of this job. The one that stands out — not just for this year, but for all time — was a bone-in ribeye at Citizen Rail, the steakhouse that’s more than a steakhouse inside the Hotel Born. Hand-cut by the in-house butcher and dry-aged for a month, my hefty eighteen-ounce ribeye settled into the best version of itself, ultra-beefy and oh-so-tender. Not even the bourbon peppercorn sauce could improve on that baby.

Pan con tomate: So simple, so good.
Danielle Lirette
Pan con Tomate at Ultreia
1701 Wynkoop Street
Making the most of its beautiful two-story space, Ultreia whisks you to a world far away from bustling Union Station. The pastoral wallpaper, ornate wrought-iron stairs and shots of sherry in star-patterned shot glasses make you feel like your Lyft driver has somehow transported you to Spain. Nothing furthers the illusion better than pan con tomate, which is how all meals at Ultreia should begin (after a gin tonic, of course). This quintessential dish is more than the sum of its parts. But perfection lies in the execution, in the way the ciabatta is griddled in olive oil, thoroughly rubbed with garlic and served with fresh puréed tomato that seeps into the crumb.

Agnolotti Dal Plin at Tavernetta
1889 16th Street
What a refuge Tavernetta has become — not just for harried commuters coming from Union Station, but for anyone looking for a place where all feels right in the world, if only for a little while. While happy hour is hard to turn down, with its well-priced Venetian spritzes and array of well-executed snacks, you’ll want to come for a proper meal, too, when you can order from the full selection of housemade pastas. Tagliatelle with lobster and Calabrian chiles has become a crowd-pleaser, but I’m wistful for a dish that’s no longer on the menu: agnolotti dal plin. A form of stuffed pasta, the agnolotti were stunning to behold, dark brown from porcini powder and chestnut flour mixed into the dough, with an earthiness matched by the nuanced filling of prosciutto, beef and pork.

Chef/owner Dana Rodriguez making hot stone stew.
Danielle Lirette
Hot Stone Stew at Super Mega Bien
1250 25th Street
Latin-inspired dim sum gets all the hype at Super Mega Bien, which isn’t surprising, since it’s delivered on rainbow-colored carts that wind their way through the high-energy dining room with the “brrrring, brrring” of a bicycle bell. But repeat James Beard nominee Dana Rodriguez saves the best for almost last, with a hot stone stew that’s become a staple of the printed Big Food menu. Starring fish stock amped with aji paste, the lusty soup cooks before your eyes thanks to a 600-degree stone set in the bowl. Loaded with shrimp, halibut and vegetables and accompanied by housemade tortilla chips to crumble on top, this dish is on a mission to make stew cool.

Spring Onion Tart Tatin at Julep
3258 Larimer Street
With its imaginative but loving interpretation of Southern cuisine, Julep is that delightful Southern restaurant where you can start with buttermilk biscuits and a cheese ball and move on to the sensational tart tatin I had last spring. Not sweet like its upside-down French apple namesake, Julep’s savory version featured mushrooms and sorghum-sweetened spring onions. This is one recipe I’d like to have (hint, hint).

Yes, these sliders are that good.
Danielle Lirette
Bologna Slider at FNG
3940 West 32nd Avenue
You wouldn’t believe how many times my thoughts have wandered to the bologna sliders at FNG, Troy Guard’s rocking neighborhood joint in Highland, since I reviewed it this summer. It’s a testament to the precise crafting of this silly little sandwich that even when the kitchen stopped making its own mortadella, the slider didn’t miss a beat. Every detail matters: the sweet, squishy roll, salty potato chip, assertive Swiss and dollop of Thousand Island dressing. And, of course, the meat, griddled until the edges slightly curl and crisp. This is one instance where bigger isn’t better: A full-sized bologna sandwich just wouldn’t have the same appeal.

Buttermilk Waffles at The Bindery
1817 Central Street
The Bindery has unfolded in waves, as veteran chef Linda Hampsten Fox has phased in her vision for a welcoming, all-day restaurant. Now more than a year old, it’s become a beloved neighborhood fixture. Drop by in the morning to enjoy cozy, buttery smells of baking pastries. Linger over dinner, sharing plates of barbecue octopus and pappardelle al cinghiale — a dish of wild boar and cocoa that’s an homage to her years running culinary tours in Tuscany. And by all means come for brunch, when morning sunshine floods through the tall windows and friends come together to plan their weekend fun. The dish I always order? Buttermilk waffles, which change with the seasons and show the same attention to detail the chef gives to nighttime fare. From creamed corn with blueberries to carrot waffles with fresh ginger, they are polished and fun, just like the Bindery itself.
KEEP WESTWORD FREE... Since we started Westword, it has been defined as the free, independent voice of Denver, and we'd like to keep it that way. With local media under siege, it's more important than ever for us to rally support behind funding our local journalism. You can help by participating in our "I Support" program, allowing us to keep offering readers access to our incisive coverage of local news, food and culture with no paywalls.
Make a one-time donation today for as little as $1.