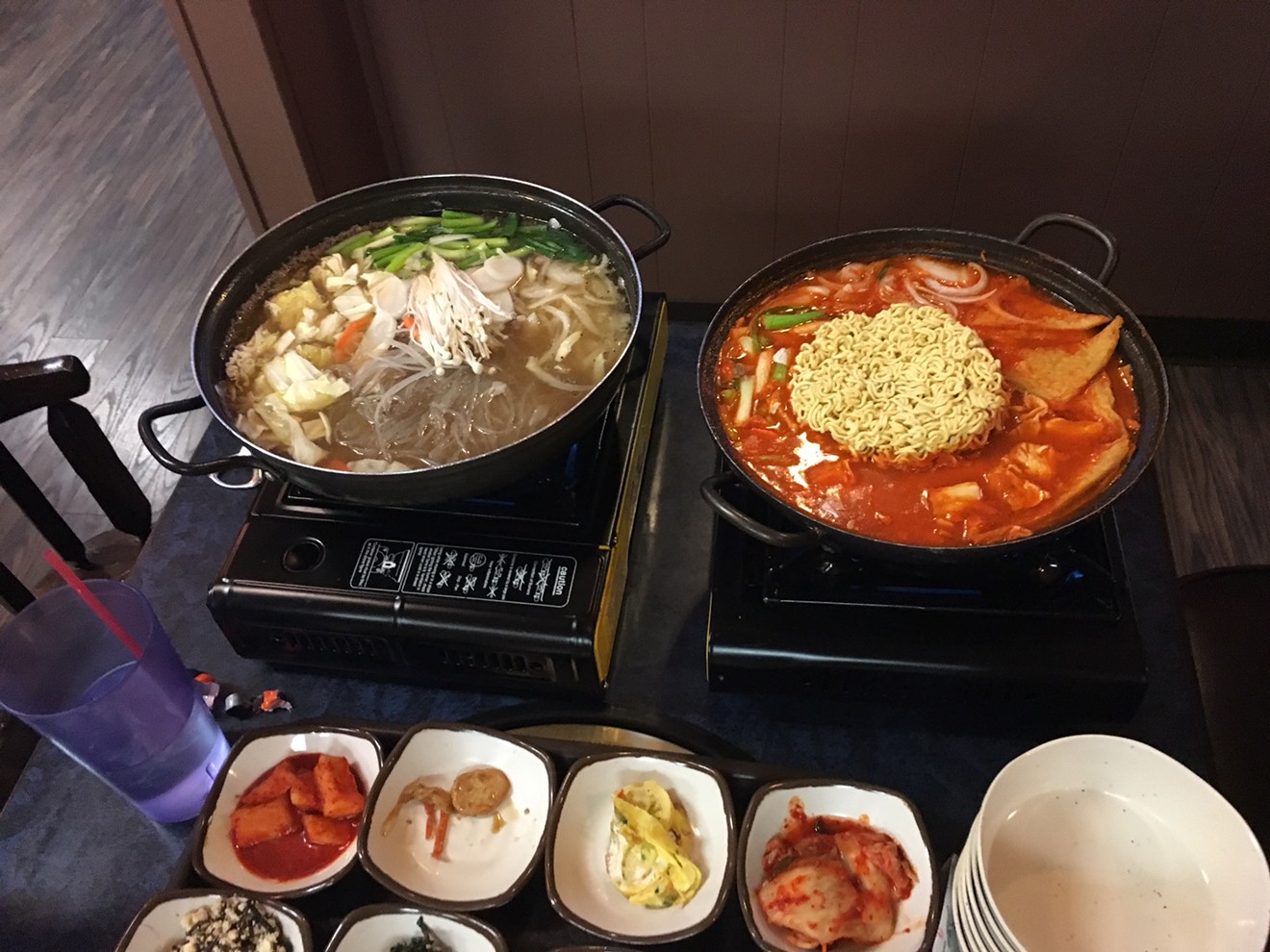 The bulgogi and octopus stew (left) and stir-fried rice cakes are both good orders at Shin Myung Gwan. Laura Shunk

A barbecue combo at Shin Myung Gwan.
Laura Shunk
Shin Myung Gwan
2680 South Havana Street Unit B, Aurora
303-751-7787
Shin Myung Gwan recently replaced Sae Jong Kwan, a mainstay of Korean barbecue in Aurora for more than a decade; good as the old restaurant was, the new resident is better. Shin Myung Gwan still offers barbecue: Tabletop grills cook up short ribs, bulgogi, pork neck and cow's tongue. Combo sets let you sample a variety of those offerings, and, as a bonus, they come with a stone bowl of spicy kimchi stew, a veggie pancake and a free bottle of beer. There's plenty of other food to explore here, too, and you should spend some time perusing the hot pots, which dot most tables; the stews are filled with everything from spicy chicken to tripe, from black goat to seafood. We're fans of the octopus and bulgogi hot pot, built on a light, clear and deeply savory broth seasoned with green onions. Don't miss, either, the peppery and slightly sweet stir-fried rice cake, which you might also know as tteokbokki. The version here, supplemented by thin slices of fish cake, is spicier than other renditions in the neighborhood, and it comes floating with a brick of ramen noodles, which melts into the broth as it bubbles. The menu says this dish is for two people, and it doesn't lie — though the same could be said for just about any dish on the restaurant's menu. Over-ordering is incredibly easy here.

Silla
3005 South Peoria Street, Aurora
303-338-5070
Silla has held court in an Aurora strip mall for more than two decades, and it still commands a legion of fans who pack the place to grill their own meats (including duck, a relatively unusual offering in Denver), sip spicy stews and dip into what might be the best version of bibim naengmyeon in this city. The noodles here are a bit spicier than counterparts in other restaurants, and come topped with beef slices and radish; variations include a cold noodle married with raw fish. The best time to head to Silla is at lunch, when you can tuck into that naengmyeon plus take down a little galbi short rib for less than $15. At dinner, head for the combination menus, which buy you, in addition to barbecue, variations on custardy soon tofu stew and a bottle of soju. Any time of day, remember to use your call button to summon your server, a ritual that seems more observed here than at other restaurants in the area, where more American-style hospitality has taken root.

Soban
12101 East Iliff Avenue, Aurora
303-369-0919
Soban is an offshoot of an acclaimed Los Angeles restaurant, noted for its seafood and praised by critic Jonathan Gold for its raw crab. Raw crab was on the Aurora menu when the restaurant opened last year, but it seems to have rolled off sometime in the interim, perhaps because it was priced at $35. Instead, peruse the seafood stew section, where you'll spy spicy codfish, monkfish, fish egg and pollack. Whatever you choose will come bubbling in a clay pot; spoon it over rice for the best effect. Speaking of rice, you'll inevitably be asked whether you want white rice or brown, and in this case, you should go with the latter: brown here is japkok, a traditional mix of different rices and beans. Supplement with a little grilled cuttlefish or mackerel. By the way, seafood-averse eaters shouldn't skip this place: The kitchen turns out solid barbecue standards alongside the fish.

Classic tofu stew at Tofu House.
Mark Antonation
Tofu House
2353 South Havana Street, Aurora
303-751-2840
Don’t let the fact that Tofu House is a franchise put you off: This string of restaurants traces its origins to central Seoul, where the existence of multiple locations of a restaurant is an indicator of excellence. True to its name, the restaurant specializes in tofu, a custardy version of which is tucked into a dozen or so stews, mixing with oyster and clam plus mushrooms, kimchi, pork or Spam. The classic version blends the bean curd with shellfish in a spicy broth (add an egg if you’d like), and the power move here is to order it as part of a combination so that you can also sample some of Tofu House’s barbecued bulgogi, spicy pork or squid. Combination meals are built for a group, and they include a small collection of banchan — the kimchi here is exceptional — plus a small fried fish, which you can order bone-in or bone-out. Spoon your soup over japgokbap (Korean multigrain rice), and pair your meal to a bottle of makgeolli, a semi-sweet, tart fizzy rice wine that pairs nicely with spicy food. When you inevitably return to Tofu House, consider also exploring the heady oxtail soup or the cauldrons filled with rice, meat, kimchi and seaweed. They may not get marquee billing, but they’re superb offerings.

Jajangmyeon at Yong Gung.
Laura Shunk
Yong Gung
2040 South Havana Street, Aurora
720-748-3003
Yong Gung specializes in Korean-style Chinese food, the pinnacle of which is a noodle dish called jajangmyeon. Rooted in a Chinese mainstay called zhajiangmian, which tops wheat noodles with a deeply savory soybean paste stewed with ground pork and garnishes that with slivers of fresh cucumber, jajangmyeon's sauce is thicker and inkier, and stronger in flavor. You'll spot at least one bowl of this dish on each table; in fact, it's likely that you'll spy tables at which each member of the dining party ordered his or her own bowl. All that is to say: Don't skip it. The sauce here is underpinned with onion, which gives it a pungent base note to balance out more fermented flavors. You'll be presented with scissors alongside your bowl, making it easier to cut these noodles if you're sharing. In addition to a sizable list of other dishes, Yong Gung also makes excellent Korean fried chicken wings, lacquering the poultry with a sticky sweet-spicy glaze.

Note: The little cylindrical rice cakes and the spicy stew they appear in go by the name tteokbokki, ddukbokki or deokbokgi, all spelling variations of the same dish. We used the spelling as it appears on each menu to help you find the right dish.