Corrida's Spanish menu is one of the best new offerings in the city. Danielle Lirette
So far, 2018 has thrown plenty of great new food our way: dim sum carts filled with Latin American flavors; a rural cider house with a rustic, wood-fired menu; a Southern eatery that looks far beyond fried chicken, biscuits and gravy for inspiration. Denver chefs seem more enamored of international influences than ever before, whether from South America, China, Spain or Mexico. The result has been a delicious mix of unique offerings in stunning settings, as well as a few new neighborhood kitchens taking chances while remaining true to what their guests want. Here are the ten best new restaurants that opened in the first six months of 2018. If they're any indication of the year's food trends, we're really looking forward to what the next six months will bring!

Housemade sausages are evidence of Acreage's commitment to quality.
Mark Antonation
Acreage
1380 Horizon Avenue, Lafayette
720-443-3007
Stem Ciders has played a pivotal role in the resurgence of cider, once one of America's favorite beverages. After five years of small-batch production in a tiny cider house downtown, the company thought big — really big — with its new Boulder County farmhouse restaurant. Located on more than ten acres of hilltop property (where orchards and vegetable gardens are even now being planted), Acreage combines a cider taproom and wood-fired kitchen to draw guests from the entire Front Range. Subtle Spanish influences on the menu nod to cider's European origins, while rustic American cooking keeps the food grounded. And without making a fuss of it, Acreage is almost entirely gluten-free. A seat in the bright and airy dining room, with views of Boulder Valley and the Rocky Mountains, makes for a relaxing evening of sipping and dining in the country. Ad Hominem adds a touch of upscale dining to the Golden Triangle.
Mark Antonation
Ad Hominem
43 West Ninth Avenue
303-454-0000
After Charcoal closed in 2017, the Golden Triangle was in need of a dining room serving creative, chef-driven cuisine that didn't feel stuffy or uptight. Ad Hominem is the answer, offering a tight menu of seasonal creations with equal hints of whimsy and comfort. A glowing, glass-encased herb garden to the side of the dining room gives guests a glimpse of the greenery that will make it onto their plates, and a menu centered on local produce and proteins makes for a distinctly Colorado experience while sending tendrils into Japan, Italy and Mexico. Brightmarten is the newest neighborhood restaurant in Bonnie Brae.
Courtesy Brightmarten
Brightmarten
730 South University Boulevard
720-541-7696
A new restaurant in an old neighborhood can be a scary proposition for residents who value familiarity over change, tradition over trendiness. The founding team at Brightmarten understood this when they took over the former 730 South in April. While platings and sensibilities are thoroughly modern, executive chef Jake Grant keeps his menu in check; there's even a dish called "steak and potatoes." You'll also find nachos, skillet cornbread and a roasted half chicken, but it's the attention to details and quality of ingredients that keep customers coming back. That, and a team of Denver restaurant veterans who prize hospitality as much as good food. 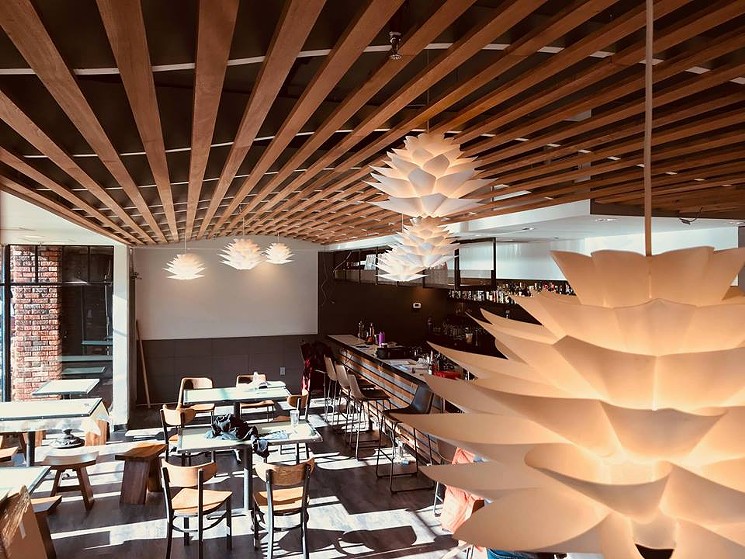 Courtesy Facebook/Chimera
Chimera
2014 Tenth Street, Boulder
720-580-1100
You need only know that Zoe Ma Ma founder Edwin Zoe is the man behind this new Boulder restaurant to understand that it's worth a visit. But add an eclectic roster of Asian dishes that reads like a greatest hits of what we're craving right now, and a reservation — the sooner the better — is a must. Handmade xiao long bao (also known as soup dumplings), lobster ramen, duck dumplings, pork belly bao buns and a noodle dish called "Everybody Chow Fun" are all draws. Put an exclamation point on the end of your night with a housemade fortune cookie complete with a trio of sweet dipping sauces. The pan-Latin American menu at Chocklo includes Argentinian empanadas.
Mark Antonation
Chocklo
6830 South Yosemite Street, Centennial
720-242-6854
There's nothing fancy about this fast-casual joint in the southern suburbs, but that's exactly the point. Chef/owner Afred Rojas has compiled an edible encyclopedia of street food from Latin America, going from Mexico to Argentina, with stops in Peru, Colombia, Cuba and Venezuela along the way. Sample empanadas from two countries, dig into hefty tortas, Cuban sandwiches or an Argentinian choripan (a grilled sausage sub), or go nuts with a nachos-style plate of salchipapas — a mound of fries loaded with cheese, guacamole, salsas and hot dog slices. You won't have to face off with an expert mixologist or share an overwrought small plate with your ten closest friends here; expect only big, flavorful portions without the typical sticker shock.

Steak is big at Corrida in Boulder.
Danielle Lirette
Corrida
1023 Walnut Street, Boulder
303-444-1333
Bryan Dayton and Amos Watts have already impressed Denver and Boulder with their work at Oak at Fourteenth and Acorn, and now they've turned their attention to beef, in the form of a Spanish-style steakhouse in a fourth-floor aerie overlooking the Pearl Street Mall. But beyond the wagyu tri-tip, dry-aged rib eye and Angus filet, there's a vast array of tapas and pintxos to keep nibblers happy for months. And with Dayton's background in the bar world, expect outstanding gin tonics, an impressive wine list and a surprising selection of vermouth by the glass. Corrida is the place to blow your children's inheritance or just relax over sips and snacks.

Julep surpasses expectations of what a Southern restaurant can be.
Danielle Lirette
Julep
3258 Larimer Street
303-295-8977
Southern food has become a cliché outside of its birthplace; biscuits, fried chicken, country gravy and fried green tomatoes make menus of restaurants inspired by only a small slice of what is in reality a rich and varied culinary history comprising many distinct regions and cultural traditions. Julep chef/owner Kyle Foster isn't content to stick within the standard playbook, though. Instead, he's consulted vintage recipe books, gathered uncommon ingredients and traveled dusty roads to bring together a roster of unusual offerings. Sure, Julep does biscuits, and does them remarkably well, but don't be lulled into complacency by the fluffy, buttery texture. Add deviled snails, pork-and-oyster sausage, a rare Chinese-Cajun street soup from New Orleans called yakamein, and smoked chicken with Alabama white barbecue sauce, and you've got a much deeper dive into the nooks and crannies of Southern foodways.

Pig ear salad is just one of many dishes that sets Q House apart.
Mark Antonation
Q House
3421 East Colfax Avenue
720-729-8887
Chef Christopher Lin is doing for Denver Chinese cuisine what Julep's Kyle Foster is doing for Southern food. Traditional Taiwanese and Sichuan ingredients and techniques find their way out of obscure neighborhood joints into the heart of the action on East Colfax Boulevard. Racy red chiles are tempered by numbing Sichuan peppercorns in Q House's Chong Qing chicken and other dishes; thin-sliced pig ears stand in for bacon in a deeply flavorful salad; and fried eggplant in General Tso's sauce show how a tired takeout classic can be remade into something fresh and wonderful in the right hands. Watch the flames leap beneath sizzling woks while indulging in house cocktails infused with Asian ingredients at the long bar and chef's counter, the best seats in the house.

Dim sum-style carts make dinner at Super Mega Bien an adventure.
Mark Antonation
Super Mega Bien
1260 25th Street
720-269-4695
Anyone who's ever been to Work & Class (which is likely all of Denver, judging by a dining room that hasn't emptied since the place opened in 2014) knows the magic that chef Dana Rodriguez brings to even the humblest of ingredients. The magic carries over to her new kitchen across the street at the Ramble Hotel, where dim sum carts trundle between tables, bringing diners tastes of Oaxaca, Yucatán, Puerto Rico and other Latin American culinary hotbeds. While the small plates are pleasing, big dishes like seafood soup that simmers on an oven-hot stone, braised lamb wrapped in banana leaf, and chipotle-glazed Peking duck that borrows the best of Mexico and China are built to thrill. Super Mega Bien is as clamorous, irreverent and spectacular as its older sibling across the street.

The new Way Back is a part-swanky, part-casual neighborhood bar.
Laura Shunk
The Way Back
3963 Tennyson Street
720-728-8156
Call it a reboot, a relaunch or a rebirth, but definitely welcome back the Way Back. In February it reopened in new digs on Tennyson Street, not far from its original Highland home on West 38th Avenue. With a new chef, menu and ambience, the updated Way Back deserves recognition on its own. Some dishes, like kung pao bison heart or odes to single vegetables, will remind diners of the original, but chef Jon Lavelle adds a touch of approachability to what was once an esoteric slate built more for culinary adventurers. And as always, the Way Back team nails the cocktail program while incorporating the theme of local, sustainable and responsible that pervades the entire operation.

Hungry for more? See more photos in our complete slideshow of the best new restaurants of 2018 so far.
KEEP WESTWORD FREE... Since we started Westword, it has been defined as the free, independent voice of Denver, and we'd like to keep it that way. With local media under siege, it's more important than ever for us to rally support behind funding our local journalism. You can help by participating in our "I Support" program, allowing us to keep offering readers access to our incisive coverage of local news, food and culture with no paywalls.
Make a one-time donation today for as little as $1.