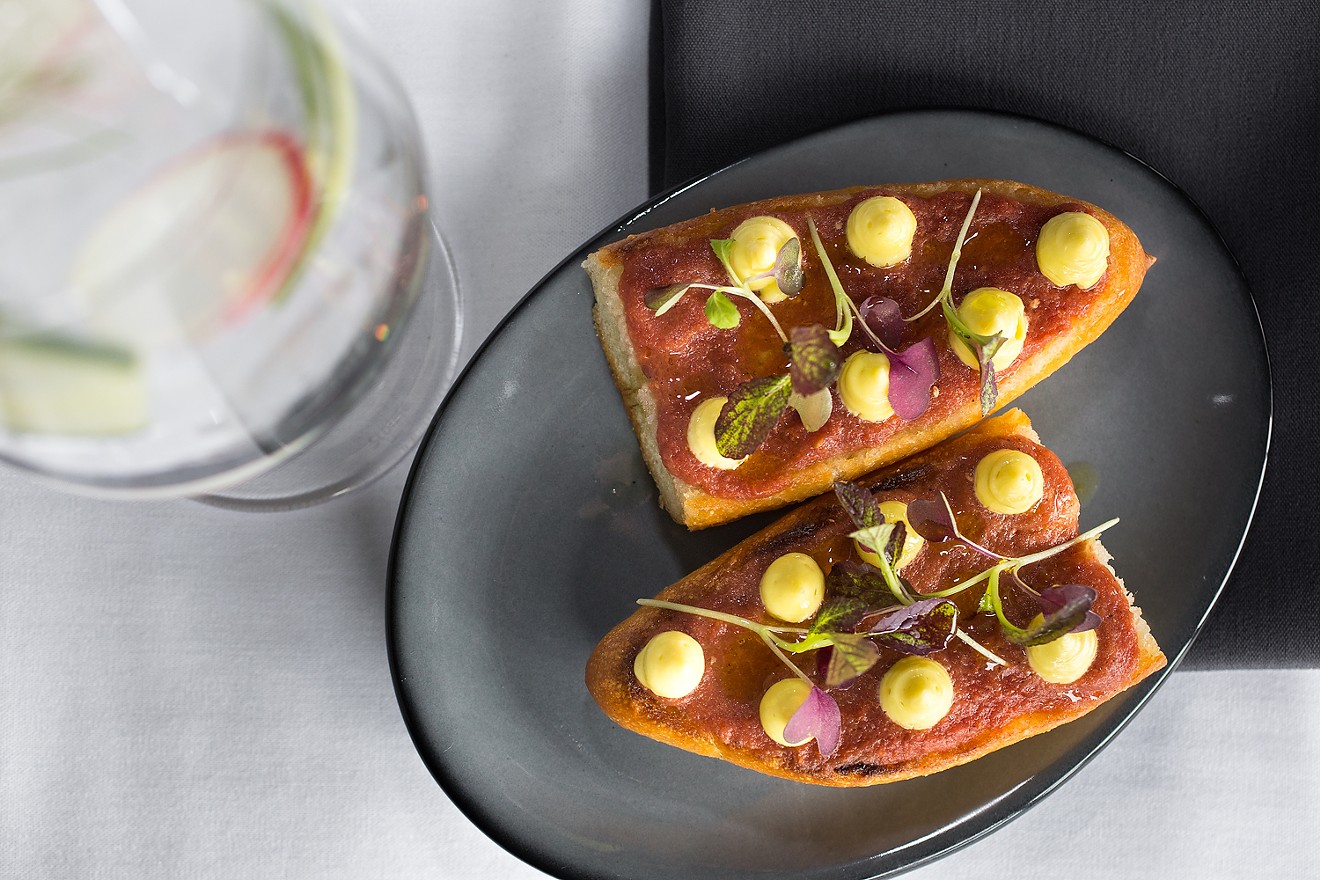 Corrida's Spanish menu is one of the best new offerings in the city. Danielle Lirette

Steak is big at Corrida in Boulder.
Danielle Lirette
Corrida
1023 Walnut Street, Boulder
303-444-1333
Bryan Dayton and Amos Watts have already impressed Denver and Boulder with their work at Oak at Fourteenth and Acorn, and now they've turned their attention to beef, in the form of a Spanish-style steakhouse in a fourth-floor aerie overlooking the Pearl Street Mall. But beyond the wagyu tri-tip, dry-aged rib eye and Angus filet, there's a vast array of tapas and pintxos to keep nibblers happy for months. And with Dayton's background in the bar world, expect outstanding gin tonics, an impressive wine list and a surprising selection of vermouth by the glass. Corrida is the place to blow your children's inheritance or just relax over sips and snacks.

Julep surpasses expectations of what a Southern restaurant can be.
Danielle Lirette
Julep
3258 Larimer Street
303-295-8977
Southern food has become a cliché outside of its birthplace; biscuits, fried chicken, country gravy and fried green tomatoes make menus of restaurants inspired by only a small slice of what is in reality a rich and varied culinary history comprising many distinct regions and cultural traditions. Julep chef/owner Kyle Foster isn't content to stick within the standard playbook, though. Instead, he's consulted vintage recipe books, gathered uncommon ingredients and traveled dusty roads to bring together a roster of unusual offerings. Sure, Julep does biscuits, and does them remarkably well, but don't be lulled into complacency by the fluffy, buttery texture. Add deviled snails, pork-and-oyster sausage, a rare Chinese-Cajun street soup from New Orleans called yakamein, and smoked chicken with Alabama white barbecue sauce, and you've got a much deeper dive into the nooks and crannies of Southern foodways.

Pig ear salad is just one of many dishes that sets Q House apart.
Mark Antonation
Q House
3421 East Colfax Avenue
720-729-8887
Chef Christopher Lin is doing for Denver Chinese cuisine what Julep's Kyle Foster is doing for Southern food. Traditional Taiwanese and Sichuan ingredients and techniques find their way out of obscure neighborhood joints into the heart of the action on East Colfax Boulevard. Racy red chiles are tempered by numbing Sichuan peppercorns in Q House's Chong Qing chicken and other dishes; thin-sliced pig ears stand in for bacon in a deeply flavorful salad; and fried eggplant in General Tso's sauce show how a tired takeout classic can be remade into something fresh and wonderful in the right hands. Watch the flames leap beneath sizzling woks while indulging in house cocktails infused with Asian ingredients at the long bar and chef's counter, the best seats in the house.

Dim sum-style carts make dinner at Super Mega Bien an adventure.
Mark Antonation
Super Mega Bien
1260 25th Street
720-269-4695
Anyone who's ever been to Work & Class (which is likely all of Denver, judging by a dining room that hasn't emptied since the place opened in 2014) knows the magic that chef Dana Rodriguez brings to even the humblest of ingredients. The magic carries over to her new kitchen across the street at the Ramble Hotel, where dim sum carts trundle between tables, bringing diners tastes of Oaxaca, Yucatán, Puerto Rico and other Latin American culinary hotbeds. While the small plates are pleasing, big dishes like seafood soup that simmers on an oven-hot stone, braised lamb wrapped in banana leaf, and chipotle-glazed Peking duck that borrows the best of Mexico and China are built to thrill. Super Mega Bien is as clamorous, irreverent and spectacular as its older sibling across the street.

The new Way Back is a part-swanky, part-casual neighborhood bar.
Laura Shunk
The Way Back
3963 Tennyson Street
720-728-8156
Call it a reboot, a relaunch or a rebirth, but definitely welcome back the Way Back. In February it reopened in new digs on Tennyson Street, not far from its original Highland home on West 38th Avenue. With a new chef, menu and ambience, the updated Way Back deserves recognition on its own. Some dishes, like kung pao bison heart or odes to single vegetables, will remind diners of the original, but chef Jon Lavelle adds a touch of approachability to what was once an esoteric slate built more for culinary adventurers. And as always, the Way Back team nails the cocktail program while incorporating the theme of local, sustainable and responsible that pervades the entire operation.

Hungry for more? See more photos in our complete slideshow of the best new restaurants of 2018 so far.