Grow Old With You keeps winning awards. Verboten Brewing
Josh Grenz knows this might sound a little weird, but his award-winning barrel-aged barleywine at Verboten Brewing & Barrel Project doesn’t actually taste very good when it is first brewed. “It’s overly bitter, turning to astringency, and it’s got some weird fruit characteristics going on,” he says with a laugh.

But that’s because the beer, Grow Old With You, isn’t supposed to be drunk by itself. Rather, it was designed to age for ten to thirteen months in oak barrels — bourbon, whiskey, rye — where it will condense and sweeten, losing a significant amount of water to evaporation. “We’ll have 53 gallons when we start and about 48 when it comes out of the barrel,” Grenz says.

And that’s when the magic happens.

Last November, a version of Grow Old With You that was aged in bourbon barrels with cognac staves for extra flavor won a silver medal at the prestigious Festival of Wood and Barrel Aged Beers in Chicago. The year before that, the same beer took home the gold for the Loveland brewery. Grow Old With You was also awarded hardware at the World Beer Cup and the U.S. Open Beer Championship. In addition, Verboten has gathered up awards and substantial recognition for several of its other barrel-aged beers, including Little Nonsense, an imperial stout, and Mountain Man, an English strong ale. 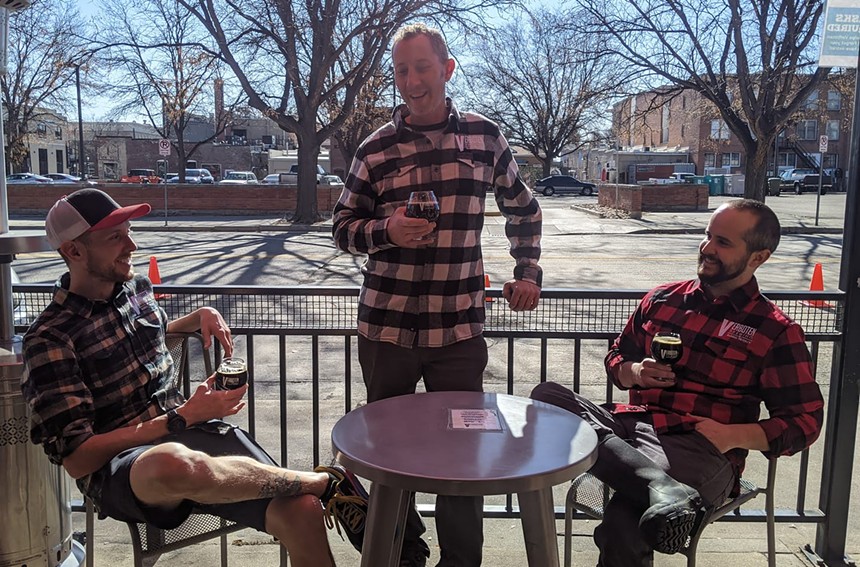 Josh Grenz (center) loves barrel-aged beers.
Verboten Brewing
That’s quite a haul for an outfit that only brews 3,000 kegs of beer per year (placing it among the smaller breweries in the state) and keeps just 35 to 45 wooden barrels on hand at any one time. And it’s why nine-year-old Verboten should be ranked among the best barrel-aged beer producers in Colorado.

The brewery’s original location, at 1550 Taurus Court, only had room for about a dozen barrels, but Grenz still managed to win two medals in 2014 at the World Beer Cup, including one for Bourbon Barrel Aged Mountain Man, an imperial rye ale that also captured the attention of beer lovers at the Big Beers, Belgians and Barleywine Festival the next year in Vail.

Then, in early 2016, Verboten moved into a new, larger spot at 127 East 5th Street, in downtown Loveland, where it was able to expand the barrel-aging project (and then expand it again). But Grenz took the additional step of adding the words “Barrel Project” to the brewery’s name at that time — something that created some self-induced pressure, since the words are written right on the building’s sign. “We wanted to make sure we kept a focus on it,” he says. “People expect us to have them on.” 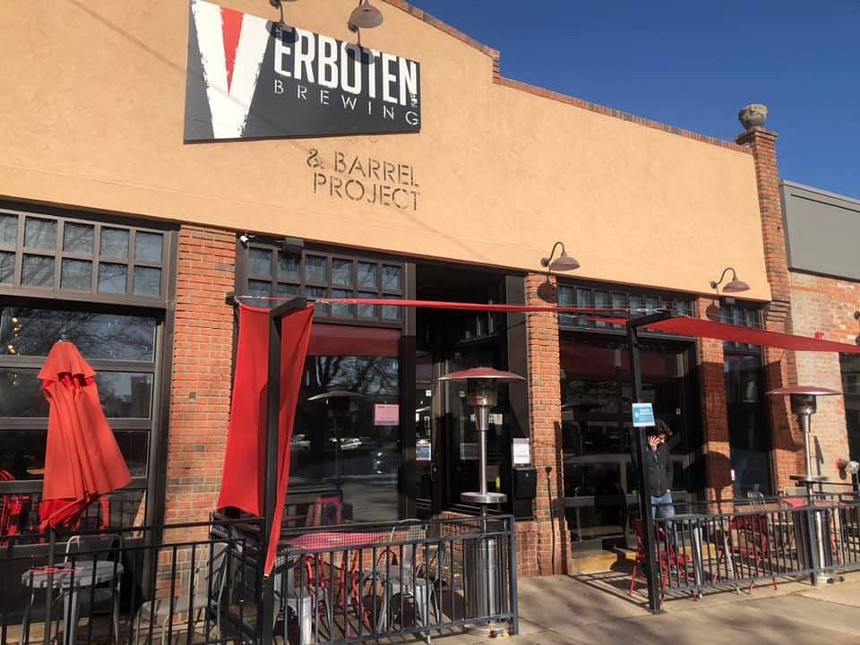 The words "Barrel Project" are written right on the building.
Verboten Brewing
“In 2019, we released a barrel-aged beer every month, which was pretty aggressive. It was actually quite an undertaking in 2018 to get ready for that,” Grenz adds. As a result, Verboten streamlined its output in 2020 and 2021, focusing on Grow Old and replacing Mountain Man and Little Nonsense with a new barrel-aged stout called Not a Speck of Light. (Verboten gets many of its beer names from Gene Wilder’s version of Willy Wonka and the Chocolate Factory.)

This year, the brewery will release a few new barrel-aged treats, but not at the pace that it did in 2019. The first of those came last week with Frau Blucher, a German-style doppelbock aged in wheated bourbon barrels. And in March, Verboten will debut Others in the Darkness, another barrel-aged stout. Later this year or early next year, Grenz plans to release a barrel-aged Wee Heavy that he will brew in February.

But it’s the Grow Old With You barleywine — which includes variations like double-oaked Amburana, triple-oaked and iced — that are the most sought-after, Grenz points out. All of them come in at 14 to 18 percent ABV. Each batch totals just about 380 gallons (or what fits in eight wooden barrels), and that is the “sweet spot” for selling it. Although Verboten sometimes distributes some cans to liquor stores from Denver to Fort Collins, he prefers to sell most of them from the taproom.

Grenz, who grew up in Fort Collins, says one of his primary early inspirations for barrel-aging was Odell Brewing, but he also gives props to other Colorado beer makers, like Launch Pad Brewery, Liquid Mechanics, River North, Cerebral, Copper Kettle, Crooked Stave and WeldWerks.

Not a Speck of Light debuted in 2020.
Verboten Brewing
“A lot of times, you find your niche and what you are good at. Everyone makes an IPA, but some breweries are better at them than others. It comes down to there being someone on the team who loves those beer styles and is really passionate about them,” he explains.

“You have to realize that the barrel is another ingredient," he continues. "You can’t just throw your stout into one and expect it to turn out perfectly. It takes time and patience and a willingness to dump a beer out if it’s not right. It's expensive, so some breweries don’t want to do that. But we’ve dumped out lots of barrels here along the way, because if it’s not right, it’s not right.”
KEEP WESTWORD FREE... Since we started Westword, it has been defined as the free, independent voice of Denver, and we'd like to keep it that way. With local media under siege, it's more important than ever for us to rally support behind funding our local journalism. You can help by participating in our "I Support" program, allowing us to keep offering readers access to our incisive coverage of local news, food and culture with no paywalls.
Make a one-time donation today for as little as $1.