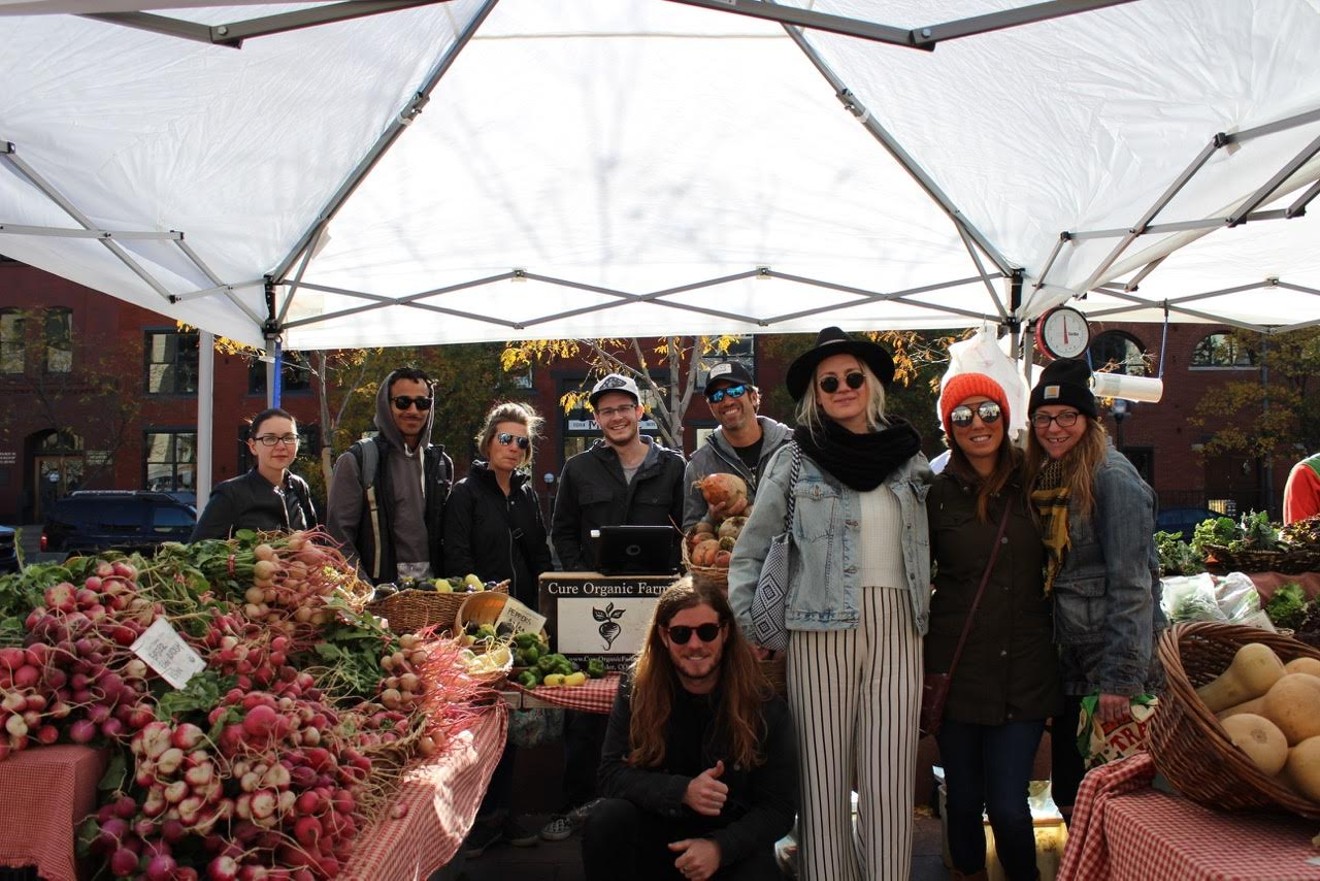 Secret Sauce staffers infiltrate the Union Square Farmers' Market to stock up on cleanse-friendly ingredients. Courtesy Secret Sauce
Over the weekend, employees of the Secret Sauce restaurant group — which includes Vesta, both Steuben's locations and Ace Eat Serve — descended on the Union Square Farmers' Market with company-provided gift cards to stock up on fruits and vegetables. Last week, many of those same employees came together for a yoga class taught by one of Ace's managers; this week, several will gather for an Ultimate Frisbee game. All of these activities are part of Secret Sauce's annual company-wide cleanse, a week of wellness meant to help employees reset and take a break from the typical hard-partying lifestyle of the restaurant industry.

Secret Sauce owner Josh Wolkon says the cleanse is rooted in an annual sober week implemented at Vesta fifteen years ago. "We’ve always done shift drinks as a company, and I was just sort of noticing the adverse affects of that," he says. "One week a year, we had no drinking in the restaurant. It was a chance to take a break, go home early, not keep the bartenders here late, and wake up with more money in your pocket." After a few years, the team added healthy activities: "Bike rides, yoga classes, active stuff to do during the week," says Wolkon.

But as Wolkon and his wife, Jen, morphed their own lifestyle into one more focused on wellness, they began to see more clearly the unhealthy effects that restaurant work could have on employees. "I started noticing how may people go down the wrong path," says Wolkon. "As you get older, you can’t keep living the lifestyle and think you’re going to last, whether that’s alcoholism or general unhealthiness. You wake up at forty, and if you're still partying in this industry, you think, what am I going to do?"

Secret Sauce provides financial support for the cleanse with produce, snacks, cleanse-friendly family meals and gift cards.
Courtesy Secret Sauce
Seven years ago, the Wolkons decided to morph sober week into a company-wide cleanse with financial support for products and programs. In the first couple of years, Core Power Yoga helped sponsor a juice cleanse, which Wolkon says was a little too intense for a job that is incredibly physically demanding. A few years ago, they found the Conscious Cleanse, written by Boulderites Jo Schaalman and Julie Pelaez. "It's much more attainable," says Wolkon. "You're not starving — there's no fasting. Basically, it's no gluten, no sugar, no dairy, no caffeine, no alcohol, no drugs, nothing packaged, nothing processed. You eat proteins with vegetables and grains with vegetables, but no grains with protein. It's just healthy food, and there's no reason you can’t eat three meals a day. The real cleanse is two weeks, but we just do a week."

Employees opt into the cleanse, and this year, Wolkon says more than 100 committed, "by far" the most since he started the program. Secret Sauce kitchens serve cleanse-friendly family meals all week long, and the restaurants suspend their shift-drink policies. And Secret Sauce provides financial support, acknowledging that cleansing can be expensive. Last year, that was in the form of a $100 gift card to Whole Foods. This year, it was via fresh-pressed juice from the Pressery; a bag full of organic produce, fruit, nuts and grains; coupons to Natural Grocers; and gift cards for Vital Root and the farmers' market.

Cleansers aren't obligated to participate in wellness activities, but the company provides chances to exercise as a group throughout the week. It also hosts a cleanse Facebook page, where staffers share recipes and encouragement. And Wolkon says the culture of the restaurants changes for the week, as participants discuss what they're craving ("Coffee is the hardest thing to quit," says Wolkon) and halt, at least temporarily, the late-night parties that typically follow a shift.

Cleanse week includes opportunities for group exercise.
Courtesy Secret Sauce
Over the years, Wolkon says, the cleanse has changed the culture of the restaurants more permanently, too: "There are always a couple of poster children who stop drinking totally, start exercising, drop twenty pounds and change their lives." But he notes the restaurants have become less party-oriented over the years than they were at the outset, and that they support wellness beyond the one week. Secret Sauce sends a team to the Boulder Bolder every year, and often to the Colfax Marathon, too. And the company heavily subsidizes memberships to the Colorado Athletic Club, Core Power Yoga, Movement Climbing and a health club in Arvada.

Watching the success of the program within his own restaurant, Wolkon is motivated to try to carry the cleanse to the broader industry. He says he's long explored working with Schaalman and Pelaez to do a Conscious Cleanse specifically geared toward the restaurant business — and toward people whose budget doesn't allow for two weeks of Whole Foods groceries — though he says that may have to be a retirement project. He's also considering ways to expand the cleanse beyond his restaurants and into Denver, because he thinks all restaurant staffers could likely improve their health. "The restaurant population nationwide could definitely live a little healthier," he says.