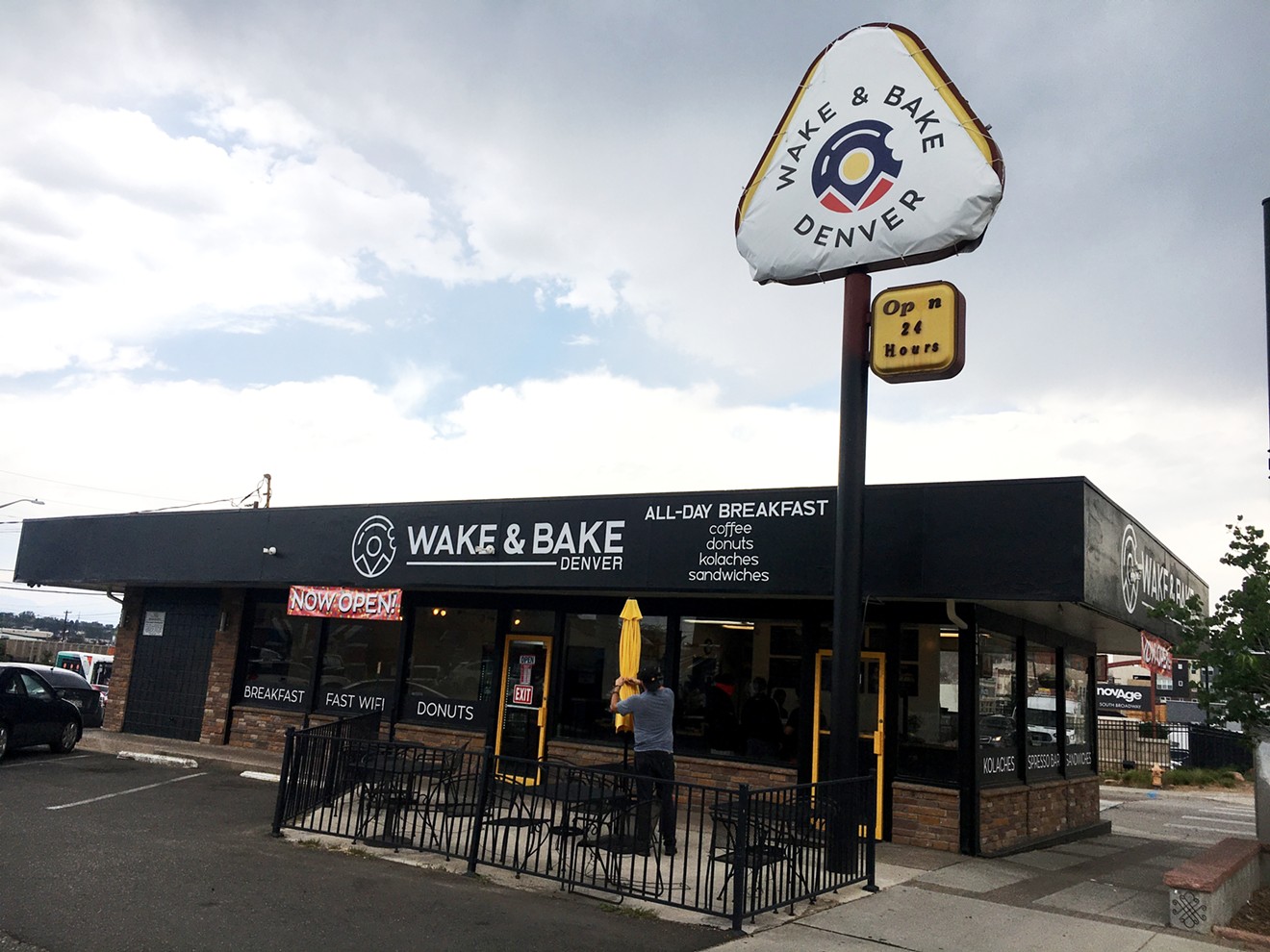 Wake & Bake is now serving doughnuts at South Broadway and Louisiana Avenue. Mark Antonation
Winchell's Donut House was a fixture for decades at 1301 South Broadway — so much of a fixture that it became more a part of the scenery than a destination for sweet morning snacks. "In a hustle-and-bustle neighborhood like this, people want something new," says Juan Lopez, who just opened Wake & Bake on July 29 in place of the Winchell's.

Lopez purchased the Winchell's location in January 2019 with an agreement to run it as it was for a year and a half before making any changes. "We're from Reno, Nevada, and my wife's parents own a doughnut shop there," the Wake & Bake owner explains. "But when we moved to Denver, I wanted to get the lay of the land first." 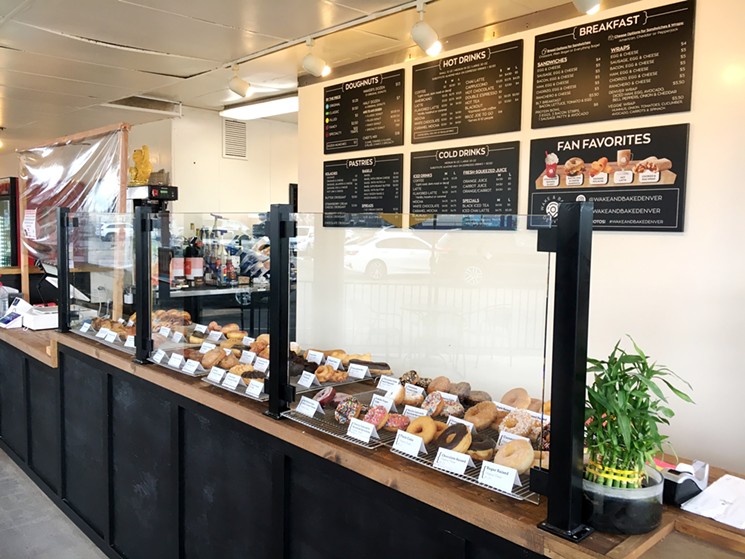 Inside Wake & Bake, where the doughnuts are old-school and the kolaches sell out quickly.
Mark Antonation
So he paid his dues with the doughnut franchise before converting it over to his own concept last month. Even in the midst of the coronavirus pandemic, Lopez didn't miss a beat, changing out the decor and signage immediately after the last Winchell's doughnut was sold. Now the display case is loaded with yeast-raised and cake doughnuts, crullers, fritters, buttermilk bars, croissants and something new: kolaches, which satisfy the savory cravings of customers. They come stuffed with spicy hot links, sausage and cheddar, sausage and jalapeño, or sausage, egg and cheese.

"I learned how to bake from my wife's parents; they're Cambodian immigrants, and they've owned their place for years," Lopez notes, adding that his in-laws taught him how to make a good-quality doughnut rather than relying on gimmicks. "I don't add cereal or other things. I wanted to make sure we have the old-school doughnuts. I think of myself as an old-school sort of individual anyway."

Raised doughnuts ring in at $1.25 each.
Mark Antonation
So the most trendy thing you'll see behind the counter is a maple-bacon bar, but most of the other pastries are recognizable and made fresh. The kolaches, especially, tend to fly off the shelves. "Every day that we've made them, we've sold out — and we make a lot," Lopez adds.

Wake & Bake also sells bagel sandwiches, espresso drinks and fresh juices. There's even a breakfast bowl, but most folks are stopping in for something sweet. Of the shop's new customers, some are visiting South Broadway for the cannabis shops; the stretch from I-25 to West Evans Avenue has the well-earned nickname of "the Green Mile."

"It's a fun name, a play on words," Lopez says of Wake & Bake, "but I had to put signs on the sides of the building that say 'breakfast all day' so that people wouldn't think it's a dispensary."

Lopez picked the right profession; he says he's definitely a morning person, but that many of his customers are night owls, so Wake & Bake is open from 1 a.m. to 4 p.m. daily. The shop is currently open for takeout only, but there are a few tables on the patio if you want to sit outside and enjoy your haul. You can also order online for pick-up or delivery.
KEEP WESTWORD FREE... Since we started Westword, it has been defined as the free, independent voice of Denver, and we'd like to keep it that way. With local media under siege, it's more important than ever for us to rally support behind funding our local journalism. You can help by participating in our "I Support" program, allowing us to keep offering readers access to our incisive coverage of local news, food and culture with no paywalls.
Make a one-time donation today for as little as $1.