Westbound & Down Starts Brewing in Lafayette, Taproom to Follow

The appropriately named Inaugural Ale was the first beer Westbound brewed in Lafayette. Westbound & Down Brewing
The kettle is boiling and the tanks are full at Westbound & Down Brewing's new Lafayette production facility, which turned out its first beer, Inaugural IPA, in early July and began packaging shortly thereafter. But the real fun will begin in October or November, when the brewery hopes to open an adjoining taproom and restaurant serving its full lineup of beer, along with both round and square pizzas.

Dubbed The Lafayette Mill, the brewpub, at 2755 Dagny Way, will use "fresh, in-house milled four," says Westbound & Down marketing director Eric Schmidt. The name is also "a nod to our grain mill in the brewery. Premium grain is the common thread across the brewery and restaurant."

The expansion into Lafayette is a huge move for Westbound, which was founded in Idaho Springs in 2015 as a partnership with the owners of the historic Buffalo Restaurant & Bar. Not only will the Mill provide a way for the brewery to make, can and distribute a lot more beer across Colorado, but it will also give Westbound a major retail presence in booming, beer-happy Boulder County.

Formerly occupied by Endo Brewing, a mountain bike-themed beer maker and bike-repair shop that closed in March 2020, the 4,000-square-foot building comes with plenty of outdoor space for social distancing. Westbound took over the lease and some of Endo's equipment, but has also added its own fifteen-barrel brewing system, two forty-barrel lagering tanks and some other pieces. 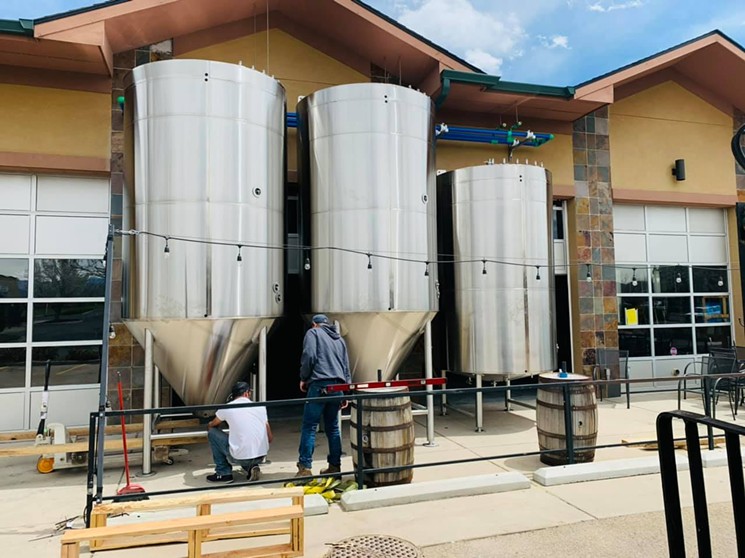 Equipment arriving at the new location a few months ago.
Westbound & Down Brewing
The Idaho Springs brewhouse is still running to help keep the taps full and for limited keg distribution, Schmidt says, but the new brewery will produce Westbound's flagship and "foundational" beers, which include a vast array of IPAs along with a few lagers and other selections. It will also add a couple of new releases, including an Oktoberfest Märzen and an American Pilsner. If things go as planned, the brewery could produce more than 3,500 barrels of beer this year, up from 1,600 in 2020.

Prior to the pandemic, Westbound — which won two Great American Beer Festival awards, along with the Midsize Brewpub of the Year award in 2019 — had been planning to build a Lafayette location from the ground up. But it changed course as demand for canned beer quickly increased while people were staying home — and because the feasibility of construction lending got murkier during the pandemic.

Schmidt says the brewery is currently waiting on its permitting in order to complete the taproom and restaurant at the Mill. At that point, Westbound will release more details about the menu.