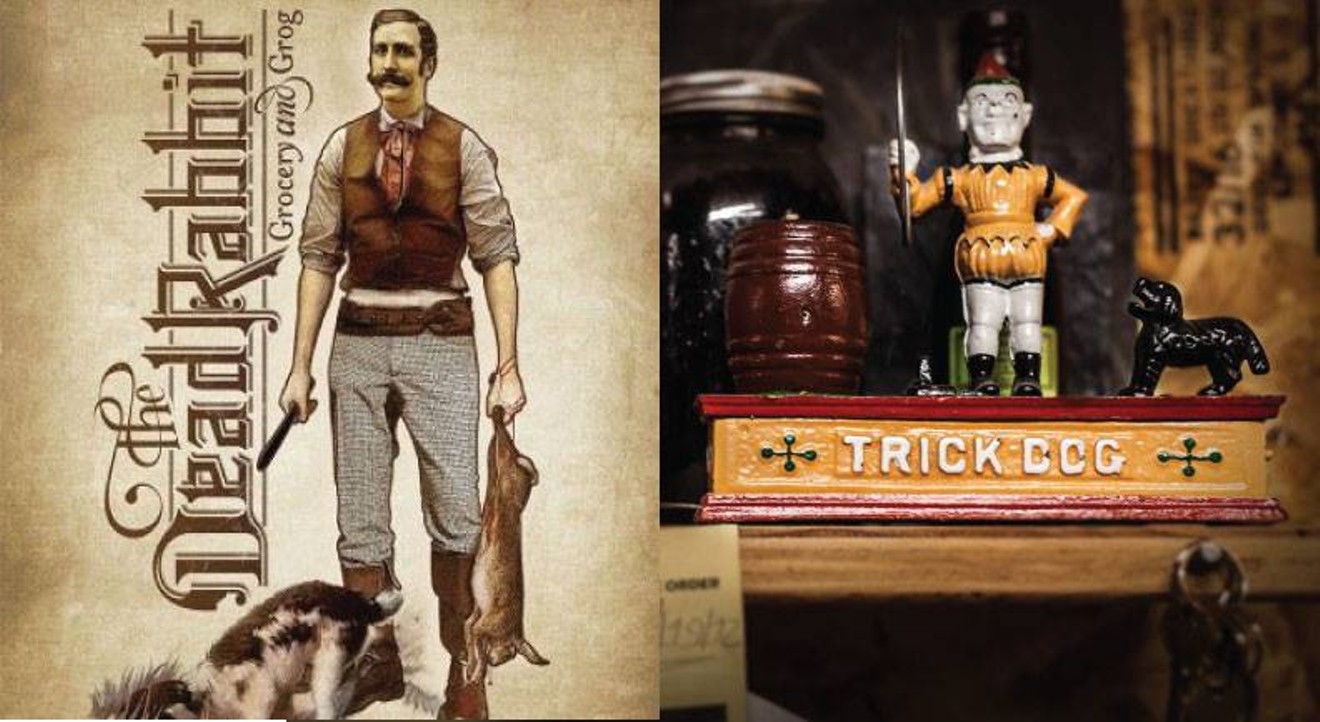 Trick Dog and Dead Rabbit go head-to-head in the first battle hosted by Occidental and Williams & Graham. Williams & Graham
Williams & Graham has long hosted some of this country's cocktail kingpins for bar takeovers, letting them change the menus, music and door policy for a night to give Denver a taste of what's happening on the beverage front in other cities. But this year, Sean Kenyon, who also owns Occidental next door, wanted to do something to up the ante a bit. "I had a random thought on a Sunday morning about turning bar takeovers into battles, because we have two bars," he says. "So I put it on Facebook and said, 'Who’s going to challenge who?'" Thus was born a new series of events that will unfold at Kenyon's establishments this year, pitting some of the best bars in the country against each other in competition for the hearts of Denver's drinkers.

For each of these battles, one bar will take over Williams & Graham, while the other will command the Occidental. The passageway between the two spaces will be open, and drinkers will move from one bar to the other, tasting cocktails and evaluating the vibe the guest bar brings. They'll vote on their favorite, and industry judges will score the cocktails. Those scores, plus an evaluation of total sales and ingredient costs, will all go into determining a winner.

The first battle, slated for April 17, is a competition between East Coast and West Coast heavyweights: New York City's Dead Rabbit will take over Williams & Graham, while San Francisco's Trick Dog will be behind the stick at Occidental. Both of these bars were on the 2016 list of The World's 50 Best Bars (Dead Rabbit was number one, while Trick Dog came in at number 37, according to Drinks International), which makes this showdown a remarkable opportunity to experience two legends in one place.

Kenyon expects they'll create different vibes, which will highlight the differences between East Coast and West Coast-style hospitality. "Dead Rabbit is a multi-level bar," he explains. "There's a tavern on the main floor, and a cocktail bar on the second floor. It's an Irish bar, but every detail is thought out. Not for a second while you’re in there do you feel like it’s a concept. It's an amazing bar, owned by Irishmen from Belfast. They do top-rank cocktails, but you can also get a pint of Guinness or shots of whiskey. The atmosphere is genial and top-notch. They'll bring the energy that comes from the tavern and the acumen that comes from the cocktail bar. The old stodgy mixologist has gone out the door; you have to be way more charismatic and dynamic, and they have such a perfect mix. This is one of the most well-executed bars in the world."

Trick Dog has appeared at Williams & Graham before, taking over for the staff when it heads out on its annual research trip. So this time, it'll move over to Occidental. Of that bar, Kenyon says, "These guys took a volume approach. They looked at their neighborhood and what it needed, and what the San Francisco scene needed, and said, 'This community needs a bar where it can order great drinks at great volume.' Walking into Trick Dog is like walking into a party at your best friend's house. You're greeted warmly, and you get high-fives from people you don’t know. Everyone wants that Cheers moment. They want to be Norm when they walk in the door. That’s what Trick Dog gives you. And they have one of the most creative takes on cocktails and cocktail menus I’ve ever seen. They're very conscious, not only socially, but also to what the community and bartending community needs. I have so much admiration for them."

Each bar will create eight cocktails; William Grant & Sons is sponsoring the event, so six of the eight cocktails will feature brands like Hendricks gin, Ancho Reyes and Reyka vodka (the other two cocktails are totally open in terms of spirits used). Williams & Graham will suspend its wait-list policy that night, but it will have a line, if the bar reaches capacity. Industry judges for this first event are Way Back proprietor Chad Michael George, chef Max MacKissock, and yours truly. Kenyon says he'll cut off sales and votes at 1 a.m. and announce a winner at 2 a.m. From 1 to 2, everyone will party together.