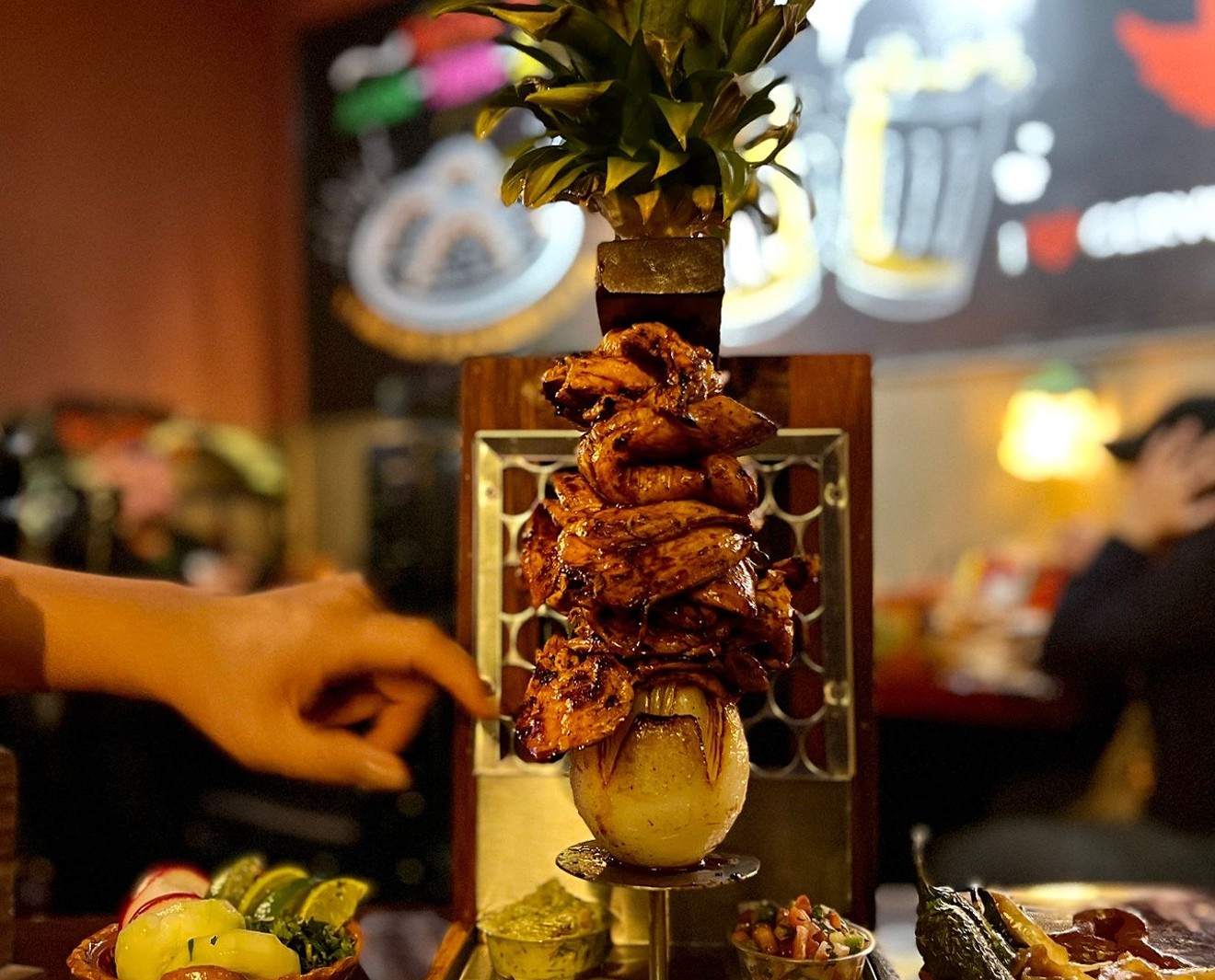 The tabletop al pastor tower at Wings & Burgers. Wings & Burgers
Tony Jauregui spent the last twenty years of his life working in other people's restaurants, but he always knew he wanted to open his own. When the pandemic hit and his salary as a district manager for Denny's was cut in half, he decided to take fate into his own hands.

Now, just a year after opening Wings & Burgers at 1733 West Mississippi Avenue, Jauregui has his sights set on opening a second location in Lakewood in early 2023.

The name of the restaurant reflects Jauergui's appreciation for simplicity. However, there’s a bit more to the menu than just wings and burgers, including the best-selling trompito, a tabletop-sized tower of meat. Guests choose from chicken or al pastor (or a mix of the two), then carve the meat themselves for a DIY taco experience complete with housemade tortillas, hot sauce and fresh veggies like radishes, onions and cilantro for $45 (it feeds three to four people).

The inspiration for the dish came from eating chicken skewers from Mexican street vendors, Jauregui explains. After sampling many different versions, he perfected the marinade and added his own spin on the dish by flipping it vertically, like a mini shawarma. 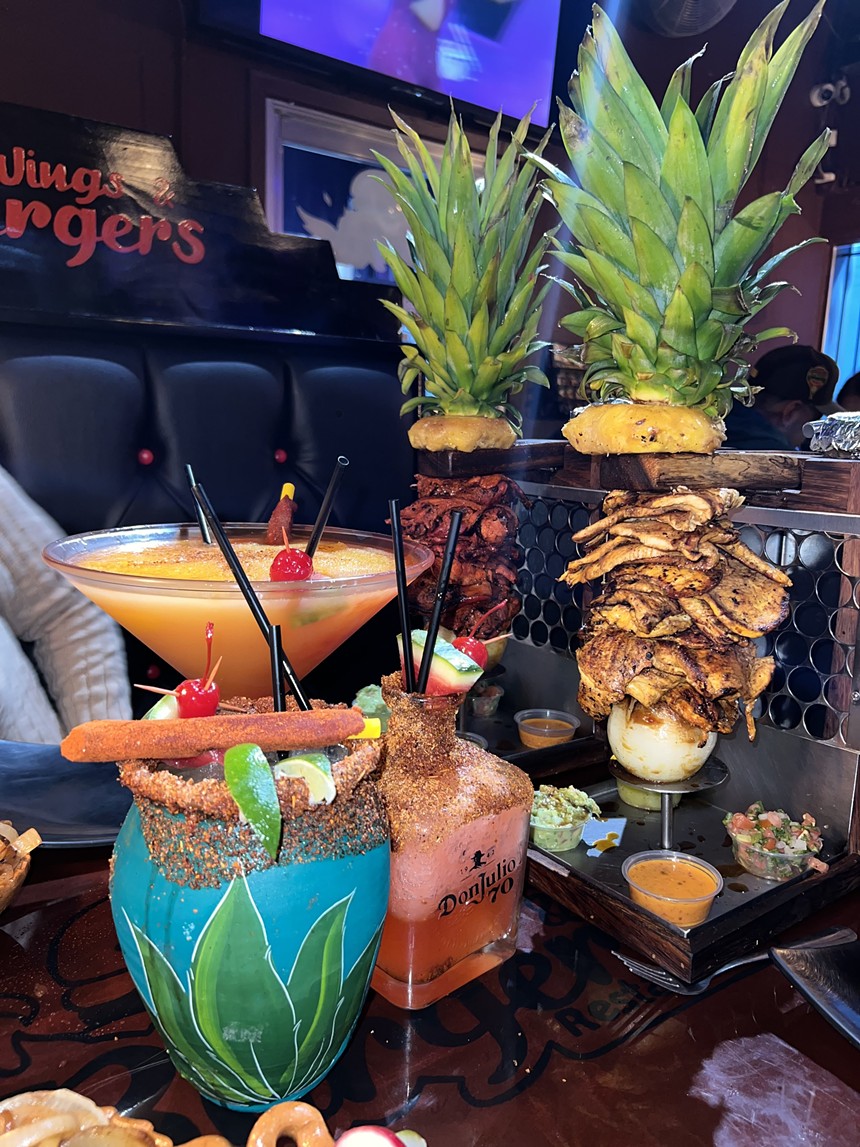 Impressive signature drinks are popular social media fodder.
Wings & Burgers
When Jauregui travels, he says that he often finds the best places to go from TikTok. So when it came to promoting his own restaurant, he decided to use the platform, both by creating his own videos and partnering with influencers. But while Wings and Burgers owes much of its popularity to social media, Jauregui notes that it's just one part of his business's success. “You can be so popular on TikTok, but when you go and get the food, get the drinks and see the vibes,” that's what really matters, he says.

Jauregui, who grew up in Mexico City, says that the inspiration for most of the dishes comes from his travels to small towns in regions like Jalisco, Guadalajara and Oaxaca. Along with the trompito, the menu includes appetizers such as French fries, onion rings and shrimp, plus two styles of burgers, four sauce options for wings, and T-bone and ribeye steaks.

Wings and Burgers is also known for its elaborate cocktails. "Sometimes we sell more drinks than food," Jauergui notes. Margaritas come in flavors like mango and strawberry and are served in fun glasses. They also come in a variety of sizes, up to a whopping 48 ounces (that’s six shots of tequila, but who’s counting?). Most drinks come garnished with fruit, Tajín and sometimes even fire.

Eye-catching food and drinks aside, Jauergui's experience working in the corporate restaurant industry taught him one thing: the importance of prioritizing people, from customers to staff. “Right now, at this time, the best is the small restaurants,” he says. “Big companies are real expensive, and it’s not the same quality of a small place. A small place tries to take more care of you.”

With wait times that typically hover around three hours, Jauergui's focus on providing a great experience seems to be paying off.

Wings and Burgers is located at 1733 West Mississippi Avenue and is open from 4 to 11 p.m. Sunday through Thursday and 4 p.m. to 2 a.m. Friday and Saturday. For more information, visit  wings-burgers.square.site.
KEEP WESTWORD FREE... Since we started Westword, it has been defined as the free, independent voice of Denver, and we'd like to keep it that way. With local media under siege, it's more important than ever for us to rally support behind funding our local journalism. You can help by participating in our "I Support" program, allowing us to keep offering readers access to our incisive coverage of local news, food and culture with no paywalls.
Make a one-time donation today for as little as $1.