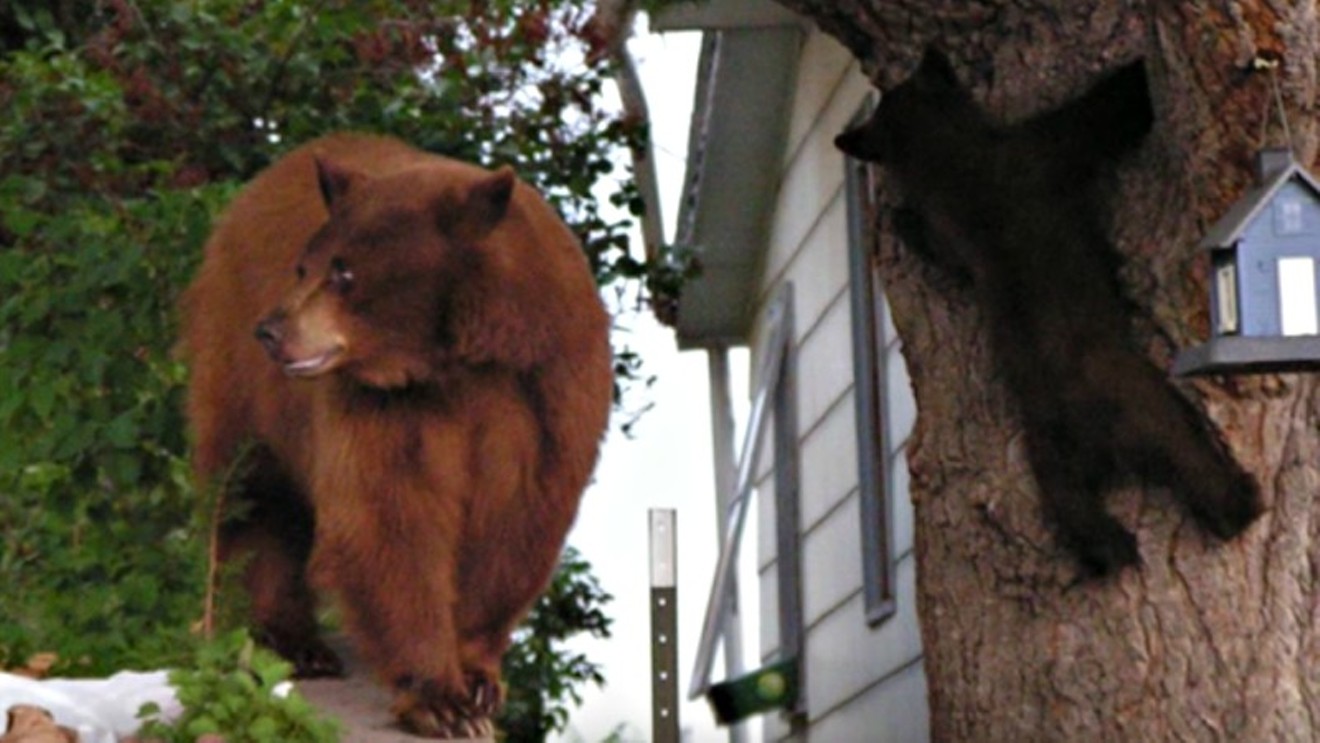 "We don't take this lightly; none of us do," notes Dean Riggs, deputy regional manager for Colorado's northwest region, an area that includes Grand Junction, Glenwood Springs and Aspen; around 51 bears have been euthanized and forty relocated in the region so far this year. "Every wildlife officer in the state would relish the idea of never having to put down a bear, once you've had to do that for a while. But the fact is, it's part of our job to protect the public and manage wildlife — and all too often, that means we've got to put animals down."

Mike Porras, public-information officer for the northwest region, stresses that the euthanization and relocation figures represent estimates, and they only include episodes handled by CPW. Given that other agencies may also be dealing with so-called problem bears, the actual totals are likely higher. Moreover, Porras points out that "there could be a slight increase in the next couple of weeks due to bear activity and as new numbers come in from across the state. But it usually slows down dramatically by now as bears begin to den up" for the winter.

Riggs is a veteran of the state wildlife service. "I'm finishing up my 26th year," he says. "I started in Pueblo, and at the time I started, generally speaking, we would have what we termed a bad bear year every one out of five. But that's progressed to today, where we see around the State of Colorado and various communities bad bear year after bad bear year after bad bear year. Those are years when we see an excessive amount of interaction with human beings, whether it be bears getting into trash cans or back yards, or breaking into buildings or breaking into cars."

One reason for this rise, Riggs believes, is "a significant increase in the human population of the state — and over the years, developments have reached into areas where bears live. When I started, our interface with oak brush and pinyon-juniper woodlands was much less than it is today." 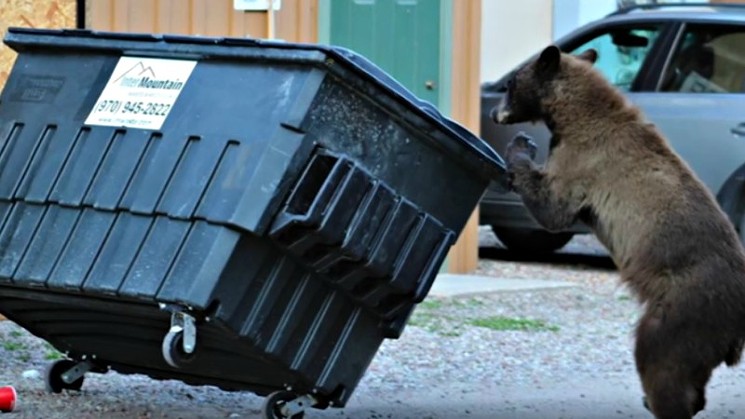 Improper disposal of trash in mountain locations is a significant lure for bears.
Colorado Parks and Wildlife via YouTube
How many bears are in Colorado? Getting a firm idea is more difficult than figuring out the population of deer and elk, which travel in herds observable from the air. In comparison, bears (and mountain lions) are more solitary creatures. But Porras says the best guess, based on research that includes analysis of teeth extracted from euthanized bears, is about 19,000, with some areas providing home to more of them than others.

For example, Riggs says, "we've seen a growing number of bear problems in the Aspen area over the past five to eight years. That's really the tip of the sword for this issue in the State of Colorado. If you want to look at what problems we'll be looking at forty and fifty years from now across the state, look at Aspen right now and that will give you an indication of where we're headed, with all sorts of negative interactions between that particular critter and human beings."

Bears are also hunted in Colorado, and Riggs sees this activity as an important tool for managing the overall population. However, a 1992 ballot initiative that eliminated bear hunting before September 2 each year has added complications over the past quarter-century. "We used to have two options in the spring. You could bait bear and pursue them with hounds. Those things were taken away through the initiative, and that leads to our wildlife officers having to put down more bears in the months of May, June, July and August, because we don't have the option of putting a licensed hunter on a problem bear. That's led to our numbers being increased."

The figures could be even higher if not for the public's sometimes contrary reactions to the Colorado policy popularly known as "the two-strike policy." The approach, which is spelled out in an administrative directive accessible at the bottom of this post (it dates back to 2007, when the department was known as the Division of Wildlife), calls for a bear to be relocated the first time it causes minor problems for people. The second time, it will be put down — and if the initial incident is deemed dangerous, a single strike is enough to trigger euthanization.

According to Riggs, many people decide against calling CPW about bear issues because they don't want to be responsible for the animal being killed. For that reason, he says, "if we're hearing about 50 percent of the actual incidents, that's pretty good." 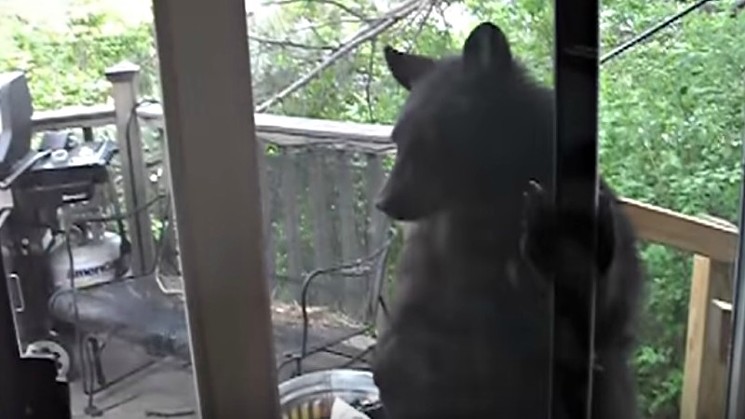 Bear break-ins are especially frequent in the Aspen area.
Colorado Parks and Wildlife via YouTube
He understands the reluctance of folks to report, but "even if everything is well and good for you, this bear's in your neighborhood, and you don't know what it's going to do to your neighbor. It's the same thing as feeding bears, which is a really bad idea, because it creates problems for other people and potentially puts them in jeopardy of their lives."

The dangers of bears are commonly overlooked, Riggs feels. An Aspen woman was attacked by a bear in 2014, and a bear in Custer County had to be euthanized this past July after going after a tent with a camper inside. In September, though, Aspen Police had to issue a warning not to take selfies with bears that wander into town.

Cutesy footage of bears getting into cars and the like "is all over the Internet and TV," Riggs acknowledges, "and generally speaking, this animal isn't a threat to human beings. But the closer bears and people come to each other, and the more comfortable these animals get around them, the more you're going to see people getting hurt or killed by bears."

In Riggs's view, "our agency has done yeoman's work in trying to educate the public about this issue. But it's a never-ending battle. There are thousands of people moving to Denver, and a lot of them come from an urbanized background where their only experience with bears is on the Discovery Channel or Animal Planet. That's why we're working with counties and municipalities to try to mitigate against some of the things that are causing these problems, like ordinances in regard to the proper disposal of trash."

These methods are intended "to protect human beings, but also make it so we can have these critters in Colorado in another hundred years," he says. "But when you start looking at the number of bears put down this year by our officers, you wonder about our abilities to sustain that both biologically and as a society."

Click to read the Colorado Parks and Wildlife administrative directive about bear incidents in the state, as well as to access bear safety information on the CPW website.