The Crafty Fox is one of several craft-beer bars that will drop Wicked Weed. Crafty Fox Facebook page
The news came as a shock to beer lovers in Colorado yesterday. Wicked Weed Brewing, the five-year-old North Carolina-based superstar in the world of craft brewing, revealed that it had become the tenth independently owned craft brewery to be consumed by Anheuser Busch InBev, the maker of Budweiser and Bud Light Lime.

Just ten months earlier, just before the Great American Beer Festival, Wicked Weed had made its splashy debut in Colorado, hitting the market with almost all of its rare and highly sought-after beers, from barrel aged stouts to IPAs to sour and wild ales. Craft-beer bars across the state held huge tap takeovers, while liquor stores moved other beers aside to make room for Pernicious IPA, Coolcumber, Oblivion and French Toast.

But several of those bars say they will no longer put Wicked Weed on tap, or any of the beers made by the breweries that have sold out to AB InBev. The others are: Goose Island, Breckenridge Brewery, Elysian Brewing, Blue Point, Karbach, Golden Road, 10 Barrel, Four Peaks and Devil's Backbone.

"We will not be purchasing any more Wicked Weed beers to be sold at Freshcraft," says Jason Forgy, who owns Freshcraft with his two brothers. "We do have a few kegs that we have already purchased squirreled away that we will tap and sell, however. This is a difficult decision for myself, my brothers and our management team. The people from Wicked Weed have been great to work with, and we truly wish them the best. They also have made some pretty great beer, and I would think that they will continue to do so.

"We made the decision not to financially support AB InBev several years ago, and this acquisition has not changed our position," Forgy continues. "We believe that where the money that we spend when purchasing beer goes is important. We have and will continue to focus on supporting independent craft brewers." 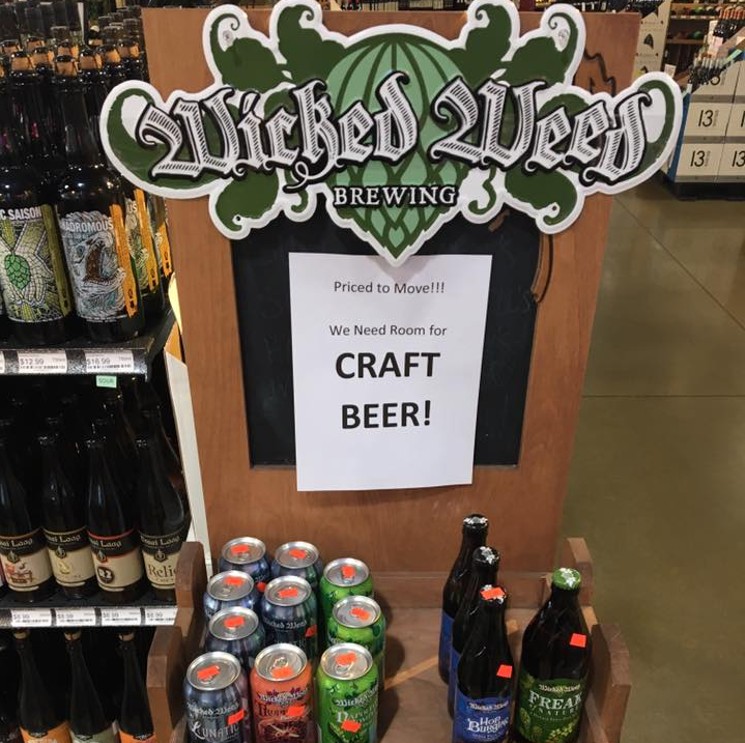 "We do not plan to purchase any Wicked Weed in the future," says Mark Slattery of First Draft. "We do have a — somewhat unspoken, but not bothered for it to be public — policy to not purchase anything from AB-Inbev. We also do not purchase from Miller/Molson/Coors. We are 100 percent U.S. craft all of the time."

Lucky Pie Pizza and Jake's Brew Bar in Littleton said they will probably follow suit. "As a small, locally owned business, Lucky Pie has always done its best to support local and small independent breweries. We don't have an official policy, but we sure like to spend our money on the phenomenal selection of true craft beer out there, not with giant multi-national corporations who are focused on profit, not on great beer," writes Lucky Pie's Benjamin Smith.

Euclid Hall, meanwhile, tapped its last remaining keg of Wicked Weed beer, Oh My Quad, yesterday and plans to donate all of the proceeds to the Colorado Brewers Guild; after that, it won't buy any more Wicked Weed.

In Buena Vista, the Jailhouse Craft Beer Bar will pour its remaining keg of French Toast for half off later this month, and will then stop serving Wicked Weed as well.

The reasons are best summed up by Jester King Brewing of Texas, one of the strongest innovators in the world of sour beer and a leader in the craft-beer community. Jester King posted this note on Facebook:

This has been a difficult day for us. The news that our great friend Wicked Weed Brewing was acquired by AB In-Bev came as quite a shock. As you might guess, we've been getting a lot of e-mails, media inquiries, and online questions about what we think and what it means for Jester King. It's no secret that Wicked Weed has been one of our closest friends in the beer industry. Regardless of what has transpired, we'll always consider the people of Wicked Weed friends, and want the best for them and their families.

With that said, we have some core principles that define who we are as a brewery, and those principles must not be compromised. One of our core principles is that we do not sell beer from AB In-Bev or its affiliates. We've chosen this stance, not because of the quality of the beer, but because a portion of the money made off of selling it is used to oppose the interests of craft brewers. In Texas, large brewers (and their distributors) routinely oppose law changes that would help small, independent brewers. We choose not to support these large brewers because of their political stances, and in some cases, their economic practices as well.

Because of this core principle, it pains us to say that we won't be carrying Wicked Weed anymore at Jester King. We think Wicked Weed beer is some of the best in the world. Their talent, techniques, and patience produces some of the most beautiful beer we've ever tasted. That, combined with their great friendship, is what makes this decision so tough for us. But like we said, our core values must be paramount at the end of the day. We wish Wicked Weed the best, will deeply miss having their beer at Jester King and working with them on collaborations, and expect them to continue to make fantastic beer. Like we mentioned, they'll always have our friendship and we look forward to the next time we can share a beer together.

Wicked Weed's Walt Dickinson with James Howat of Black Project, in a photo shared by Black Project.
Black Project
That was followed by this stunning message from Denver's own Black Project Wild & Spontaneous Ales:

This morning, we received an email from Walt Dickinson, of Wicked Weed Brewing Company, a few minutes before the news appeared publicly, informing us of the big news. When we checked online, our social media feed was flooded with posts about Wicked Weed and ABInBev. Personally, Sarah and I were shocked to learn of ABInBev's acquisition of Wicked Weed, and we still are. We consider Walt and the rest of the Wicked Weed crew to be friends and we are happy for them and honestly wish them the best.

However, at Black Project, we have deep and serious issues with many of ABInBev's business strategies, mission, and overall ethics as they relate to craft beer in America. In Denver alone, we've seen several instances of highly aggressive, predatory, and what we consider to be unethical practices. We truly believe that ABInBev intends to systematically destroy American craft beer as we know it. We don't personally buy, seek, trade, or acquire any of their products for this reason, and we've been known to encourage our friends to do the same.

As some of you may know, and something many people have asked us about today, we have two collaboration beers with Wicked Weed currently in-progress; one beer at our facility and one at theirs. We also had plans, and were looking forward to attending, the Wicked Weed Funkatorium Invitational this July. We had a decision to make - to continue a business relationship with Wicked Weed now that they will be owned by ABInBev, or to cut ties and hopefully remain friends.

For us, the choice is clear. At this stage, we don't feel we are able to have a business relationship with Wicked Weed because that connection, ultimately, is one with ABInBev. Unfortunately, we don’t feel that having any connection with ABInBev is something we can do while still maintaining our mission, values, and core beliefs.

We wish the best to everyone at Wicked Weed and we are happy for their success. We know they will continue to make great beers and we hope to remain personal friends in the future.

Here are thoughts from several other craft-beer bars.

Walter's 303 posted this on Facebook: "Anheuser-Busch is purchasing Wicked Weed Brewing company. We currently have 2 two taps of aforementioned beer. Mention this post and a glass of "Wicked Bud Weed" is FREE with the purchase of any other beer!" The bar clarified that after that, Wicked Weed would be "gone forever."

Owen Kemp, of Jake's Brew Bar says: "Generally speaking, we have rarely worked with InBev from a distribution standpoint. While I suppose we wouldn't necessarily say 'No, not ever,' it's probably a lower priority, given our stronger existing relationships and support that we receive and try to reciprocate with smaller distributors and even self-distributed local breweries. We're a small business, and we definitely appreciate and want to support those folks. It's also a matter that we try to listen to the craft-beer consumer on. If we're hearing angst surrounding a certain brewery from our customer base, we're certainly going listen to what's important to them."

Kyle Moyer, owner of the Crafty Fox, says: "Yes, unfortunately I'm going to drop them. I have always had a huge stance against In Bev since opening Bogey's and Crafty Fox. We've always been very vocal about our stance against AB In Bev." About the buyout, he says, "Yeah, we were pretty upset about it."