The Largest Denver Brewery You've Never Heard of Is Getting Bigger Sleeping Giant Brewing, which was founded in early 2015 by Matthew Osterman, doesn’t have a taproom or any of its own products. Instead, it contract brews for small beer makers — half of them in Colorado — that want to grow quickly by selling more beer but don’t have the capacity or the equipment to do it themselves.

It’s a business model that is working well. Sleeping Giant just spent $750,000 to increase its own capacity by 55 percent, adding several huge fermentation tanks. And the company plans to spend another $500,000 for more tanks later this year. By the end of 2017, Sleeping Giant will have increased its capacity from 45,000 barrels of beer per year — more than Great Divide Brewing or Crazy Mountain Brewing — to 70,000 barrels. (It is currently on pace to brew about 32,000 barrels in 2017, a number that will go up significantly in 2018.)

"It’s a decent spot to be in," Osterman says. “And we are booked out six months in advance right now." Station 26 Brewing makes all of its canned beers at Sleeping Giant.
Jonathan Shikes
That success is coming because Sleeping Giant’s clients are, with few exceptions, “exceeding their own projections,” Osterman says. While many medium-sized and large craft breweries have faced flat or declining sales, “I don’t see it yet," he notes. "Our smaller-sized customers are growing. They aren’t feeling the pinch.

"I have the same concerns as everyone else. At the size we are, if I had my own brand, those aren’t dollars I’d be anxious to spend,” he continues, referring to Sleeping Giant’s recent expansion. “But we take on good breweries, we vet them, and because of that diversification, we are growing.”

“We view them as an extension of our own brewery,” says Weldwerks Brewing founder Neil Fisher, who has been making two beers at Sleeping Giant and just brewed and canned a third, Alpha Bits, this month. "This was the first time they had made a beer like this, and they nailed it on the first try.”

Last June, Sleeping Giant scored another coup when it hired Joe Schiraldi, who had recently exited Left Hand Brewing, where he'd been for 23 years, most recently as the operations chief. Schiraldi helped Left Hand grow from a tiny startup to Colorado’s fifth-largest brewery, and Osterman hopes his experience can help Sleeping Giant as it grows, too: “He’s been there before. Whatever it is, he's seen it." 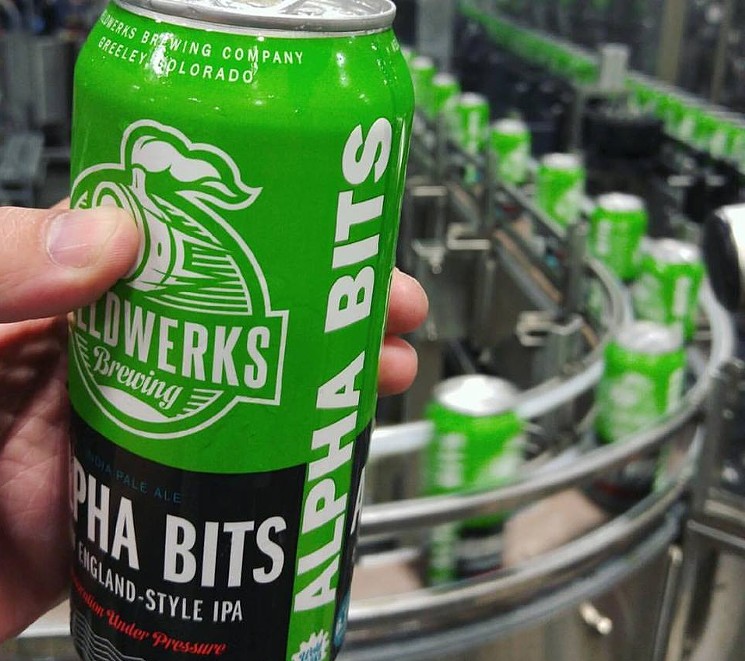 Weldwerks Brewing's Alpha Bits is the latest beer to come off the line at Sleeping Giant.
Weldwerks Brewing
In addition to the breweries mentioned above, Sleeping Giant also contracts for New Planet, Bosque Brewing in New Mexico, Montana’s Uberbrew, California’s House Beer, Honor Brewing in Virginia, and Guns & Oil Brewing in Texas. Taken together, the company has fourteen to sixteen clients at any one time. It also has a waiting list of at least ten other beer makers that would like to work there once Sleeping Giant has the capacity in 2018.

While Osterman has heard the complaints that some people in the craft-beer industry don’t think it’s fair for a tiny brewery to be able to produce and package beer on a much larger level, he believes that his company can serve as a bridge that allows those small breweries to spend money on sales and marketing rather than real estate and equipment, and serve as a bridge for them as they expand.

The breweries, in turn, are attracted to Sleeping Giant not just because of its capacity, but because of its equipment and technology. In addition to a top-of-the-line canning machine that can cleanly package 200 cans per minute (just like those at Avery and Oskar Blues), the company also owns a centrifuge to help make cleaner, more consistent beer. The centrifuge helped Weldwerks, for instance, to select exactly how hazy it wanted Alpha Bits to be. It can do the same for other beers, whether they are cloudy or clear.

Because of that, the breweries entrust Osterman with their recipes, at least six of which have won Great American Beer Festival or World Beer Cup medals. Uberbrew, for example, won Small Brewery & Brewer of the Year at GABF in 2016, along with two gold, one silver and one bronze medal. “That’s a big deal, so we need to brew their beers exactly right, because that’s what they picked up the medals for,” Osterman says.

Weldwerks Brewing teamed with Sleeping Giant for six to eight months to create Alpha Bits, a New England-Style IPA that should be able to withstand the packaging process. This style of beer typically has a very short shelf life because the process used to brew it can leave the beer unstable. But by tweaking the recipe and by using the centrifuge, Weldwerks believes it has created one at Sleeping Giant that will work.

"They were willing to tackle this style, and we were in constant communication with them as their processes evolved,” Fisher says. “We aren’t able to control all the variables in-house with our own equipment, but they can, and we don’t have a canning line. So for us, Sleeping Giant was the only sustainable way to hit a certain distribution footprint with a beer like this.” If things go well, Weldwerks plans to brew a hazy pale ale and a double IPA with Sleeping Giant next year or the year after.

Some of the beers brewed at Sleeping Giant.
Sleeping Giant
“Some breweries don’t want to admit that they brew their beer there. They hide behind a closed door, and that stinks, because Sleeping Giant is really good at what they do, and they don’t get the credit,” Fisher adds.

Osterman's biggest challenge for 2018 will be keeping lead times down; having to wait six months is difficult for some breweries, so he's hoping to lower it to three months once his equipment is in place.

And finally, he's looking at buying a small pilot system where his employees — he has 21 of them — can flex their creativity, even if the beer is only served in-house.