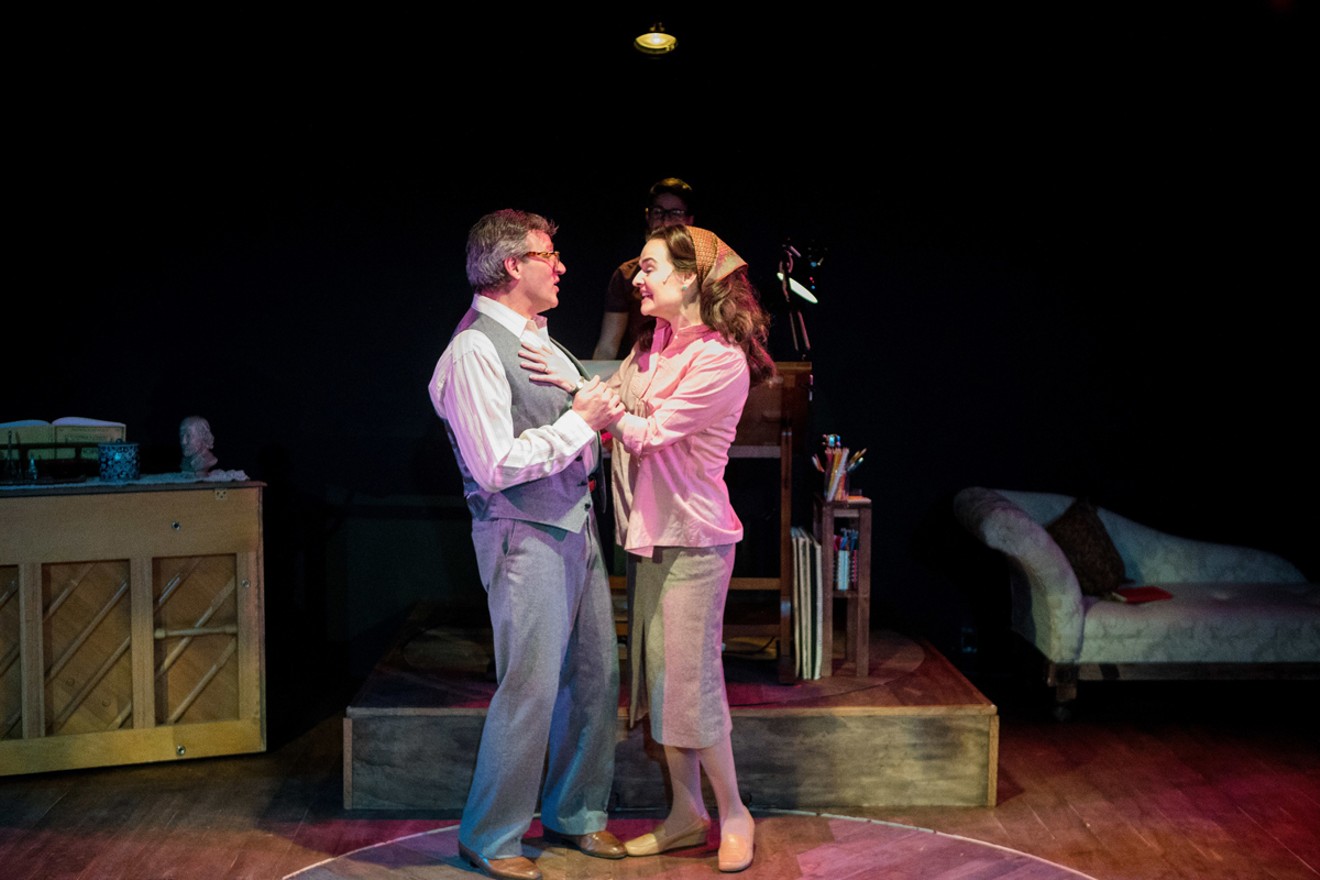 Rory Pierce and Heather Lacy in Fun Home. Sarah Roshan Photography
All of us try to fathom our parents’ lives, to pull the disparate moments of childhood together into something coherent — but few people have as many disparate moments to put together as Alison Bechdel. Fun Home is the musical version of Bechdel’s autobiographical graphic novel of the same name. Written by Lisa Kron with music by Jeanine Tesori, the show opened on Broadway in 2015 and won five Tony awards; the regional premiere is now showing at Miners Alley Playhouse.

There are three generations of Alison in Fun Home. Adult Alison sits at a desk slightly above the action, sketching and commenting as she looks down on her younger selves and their struggles. Small Alison is dealing with the tyrannical rule of her father, Bruce Bechdel, a high school teacher and funeral home owner. He’s a hard man to live with, a perfectionist, withholding and sometimes cruel. What Small Alison doesn’t know — and her adult alter ego does — is that Bruce is gay and has a taste for teenage boys. Middle Alison, a student at Oberlin College, writes frequently to her father in the hope of gaining his approbation, becomes politically radicalized, and gradually understands her own lesbianism. When she confesses her new love, her father’s response is an ambiguous letter; we sense in his words an aching desire to reach out, but Alison sees only condescension.

Fun Home is Bechdel’s attempt to understand her memories and fathom the complicated mix of anger and love she feels toward the father who insisted she dress “girly” and made her and her two brothers spend most of their time cleaning and organizing the old house he’s obsessively restored to a kind of Victorian perfection with all kinds of frills, flounces and furbelows, along with objects retrieved from abandoned houses and other people’s trash. The musical is also about the process of creation, and adult Alison (like her creator, I imagine) relies on objects because of their power to jog memory and the solidity of the truths they convey: a tarnished jug, a dead mouse, a book by Colette.

Despite Bruce’s love of ornamentation, the set is fairly empty, with a large revolving circle in the middle into which Alison attempts metaphorically to fit her father’s life, a little furniture and the raised desk. There’s something resonant in the image of the three Alisons on that clear stage. Small Alison, moved in ways she can’t begin to understand by what adult Alison calls an “old-school butch” delivery woman, sings about the woman’s “Ring of Keys”; the passionate melody is wonderfully rendered by the talented young Sophia Dotson, who brings a beautiful honesty and simplicity to the role. Middle Allison, played by Abigail Kochevar, gives exuberant life to one of the show’s best songs, “Changing My Major (to Joan).” Adult Alison usually watches quietly; sometimes she sketches or thinks about captions. Periodically, you see her lean forward, squinting as she tries to absorb what she’s hearing; now and then, she feels impelled to enter a scene, standing arms crossed, or talking to a younger self — who, of course, can’t hear her. Susannah McLeod’s smart, thoughtful interpretation is the backbone of this brilliant evening.

In fact, director Len Matheo’s entire cast is excellent, including Heather Lacy as Bruce’s angry wife, Helen, and Chloe McLeod’s lovely, silent Joan. And as bullying Bruce, Rory Pierce somehow exudes a sad, baffled warmth. When Bruce commits suicide, Allison’s quest to understand her father assumes a particular urgency. Battling with his memory, she has to balance her knowledge of his skewed homosexuality against the awakening of her own young desires.

The intimate playing space works well for the musical: We can hear the actors’ breath; periodically they’re so close we could touch a shoulder. The music, directed by Mitch Samu, sometimes swells with feeling; at other times it’s as quietly subtle as a single violin or a fall of piano notes. There are big, lively numbers: a sequence in which the three children play in and around a coffin singing “Come to the Fun Home”; and “Raincoat of Love,” a parody of happy family gatherings on television, featuring neon orange clothes, platform shoes and go-go boots. But beneath Fun Home’s lightness of touch, there’s profound emotional depth — and this beautiful production does every moment full justice.