As he prepares to raise the curtain on the next season of the CSF, Orr took a break to answer our Colorado Creatives questionnaire.

Timothy Orr talks Shakespeare at the University of Colorado Boulder.
Jennifer Koskinen, Colorado Shakespeare Festival
Westword: What (or who) is your creative muse?

Timothy Orr: My inner child is the best way to describe it. Whatever that thing is inside me that wants to play, laugh out loud, be surprised, make something beautiful and watch something cool. It provokes my imagination because it’s always getting bored, it wants to make something new, it’s frequently irreverent and mischievous. And hungry. That child totally grabbed the steering wheel for the Twelfth Night I’m directing this summer. I’m tied up in the trunk.

Richard Pryor, Keith Moon and Sarah Silverman. Because you said it was a party.

The best part is that none of them are day traders. The people who work in theater regularly and professionally in the Denver area are taking it seriously and — this could be my imagination — are wanting these theaters to stay stable and grow. They’re invested long-term. The only downside is the numbers are small and I wish they’d grow. We need more professional actors, more stage managers and designers. With theater companies growing and new ones opening (successfully, which is great!), it’s often hard to connect with enough talented people.

Orr working with actors for a 2018 production of Tom Stoppard's Rosencrantz & Guildenstern Are Dead.
Jennifer Koskinen, Colorado Shakespeare Festival
How do you keep the Shakespeare festival fresh and timely?

How much ink do you have? That’s the ultimate goal of all our efforts, I think. But we have a few guidelines that stand out in our planning process: Why this play now, and here? If there are not at least fifteen good answers to that question, we shouldn’t do it. We need to be excited about new ideas. If we’re not, the audience won’t be, either. We are an American Shakespeare festival, specifically, an outdoor festival in the West. We embrace that spirit in our work and reach for that relevance; we resist being something elitist, dusty or antique.

Playing Captain Hook someday with one of my daughters playing Peter Pan.

What advice would you give a young hopeful in your field?

Work. And work hard. Always be working, so go where the work is. Experience is where you learn the most and how you mature as an artist. And a mature artist with a deep bag of skills is worth his or her weight in gold. 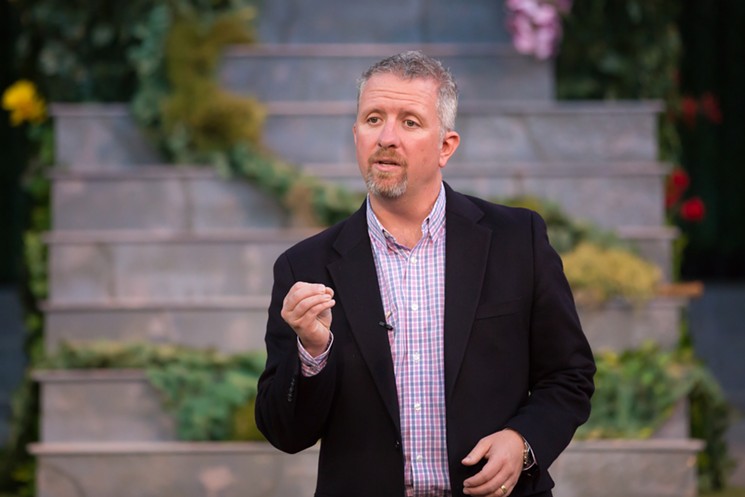 Orr discusses the nuances of Shakespeare's Love's Labour's Lost.
Jennifer Koskinen, Colorado Shakespeare Festival
Colorado, love it or leave it? What keeps you here — or makes you want to leave?

My wife and I are from northern California; we moved here in 2011, and we love it. I’ll be honest, though: Since then we’ve moved three times, had two children, built a house and been managing a theater company. I’m mostly familiar with the two-mile stretch of Colorado between my house and my office. They tell me Colorado is beautiful, though. Lots of mountains, right? I look forward to exploring it someday.

All I do is work with Colorado creatives, and you want me to pick a favorite? I don’t have a favorite, but I will say I’m a mighty big fan of Sylvia Gregory. Her casting agency has been a boon to the Colorado Shakespeare Festival, and damn, she’s a talented, hardworking creative.


What's on your agenda in the coming year?

Glad you asked. I’m going to be working hard to raise money and support Shakespeare Across Colorado. We’re bringing Shakespeare and live performance to every county in Colorado. It’s a very big project, and I’m excited to get into it.

I think Wendy Franz needs more light shined on her. She’s a huge talent as the managing director of the Colorado Shakespeare Festival, but also an outstanding director and a tireless supporter of other theater companies in Colorado. That’s important.

The 2019 Colorado Shakespeare Festival presents Twelfth Night, As You Like It, Romeo and Juliet, King John and Mike Bartlett’s King Charles III: A Future History Play in repertory, June 7 through August 11, at the Mary Rippon Outdoor Theatre and the University Theatre on the University of Colorado Boulder campus. Regular individual performance tickets start at $17 and full season tickets at $55; see the CSF website for information, tickets and additional ticket options.

Learn more about Timothy Orr online.
KEEP WESTWORD FREE... Since we started Westword, it has been defined as the free, independent voice of Denver, and we'd like to keep it that way. With local media under siege, it's more important than ever for us to rally support behind funding our local journalism. You can help by participating in our "I Support" program, allowing us to keep offering readers access to our incisive coverage of local news, food and culture with no paywalls.
Make a one-time donation today for as little as $1.