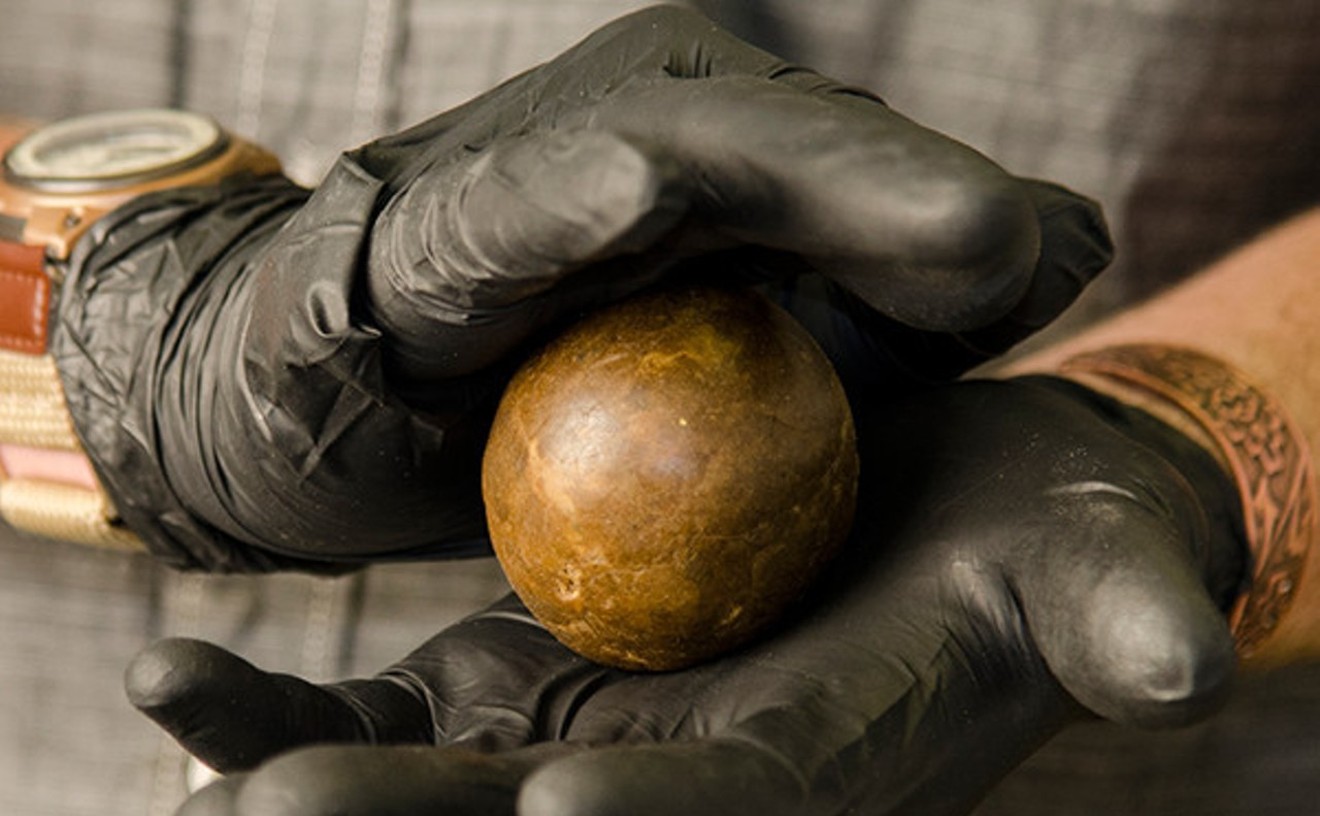 Courtesy of the Greenery Hash Factory

After founding the Greenery dispensary in 2013, Joel Cameron and Brian Capsay launched the Greenery Hash Factory. The Durango operation makes rosin, live resin and other modern concentrate, but the team's old-school stuff is what's holding down the roots of nearly 300 dispensaries across Colorado. Generally testing at around 40 percent THC, the Hash Factory's Lebanese and Moroccan hashish aren't as powerful as modern concentrate, but the centuries-old solventless methods produce timeless garnishes and musky hash hits. The Lebanese variety is blonde, crumbly and floral, and sits perfectly on top of a bowl or bong snapper, while the Moroccan-inspired version, cooked over an open flame and hand-pressed, has a gooey consistency that evokes memories of knife hits or trying to stick a pin under a glass. For American hash heads of decades past, the Hash Factory also whips up kief, pressed kief and bubble hash. Finding an extra kick in potency and flavor without getting lost in space is a difficult line to walk, but all of the Hash Factory's options will help you toe it. 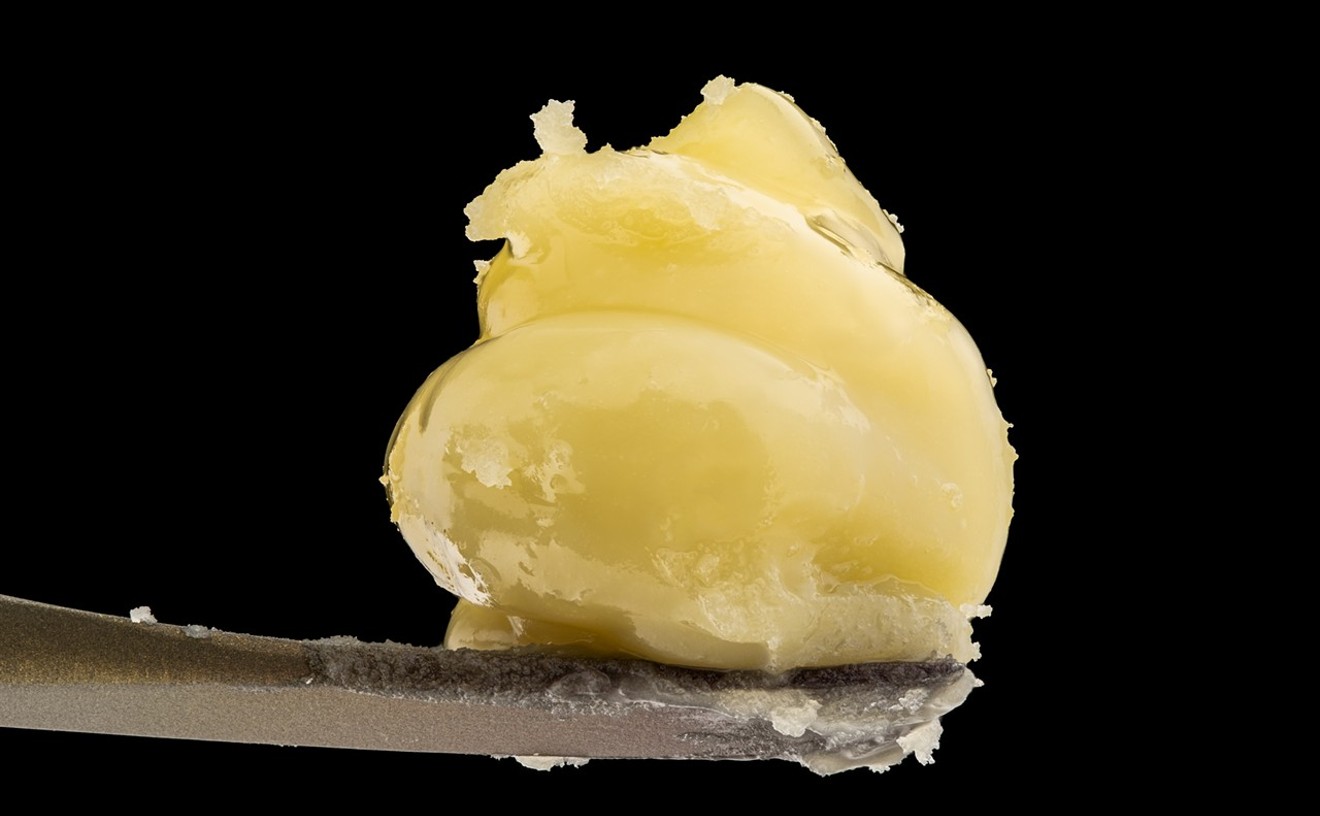 Green Dot Labs is in the middle of a hot run through the flower and rosin sectors, continually dropping new and improved versions of the company's own genetics. Before all of that, though, the Boulder extraction firm built its name on solvent concentrates, and Green Dot still hits the bullseye on live resin. Batter, THCa crystals and terp-filled vaporizer cartridges sold through the company's Black and Blue Label brand, built on Green Dot strains, are the best representation of the team's talent, while more affordable Silver and White label products, made from plants grown by other cultivations, provide a more affordable dab. Think of it like the Johnny Walker of hash, but better.

A rosin lab founded by former employees of DabLogic, Soiku Bano had a sizable hand in cold-cured rosin's popularity last year. Despite being new on the scene, Soiku Bano has already created a strong reputation on the back of its cream-colored rosin, the result of curing at a cooler temperature than that used in the traditional process. Partnerships with edibles brands Cheeba Chews and Dialed In to make rosin candies and well-received solventless vaporizer cartridges put Soiku Bano on a level with few extractors in Colorado. Expect that trajectory to continue, one bao-bun-looking gram of rosin at a time.

Allgreens has been a central Denver go-to for years now, especially for hash heads. And as more wholesale extractors move into the space, it keeps finding ways to distinguish itself. A dispensary selling in-house rosin vape cartridges is a rare find, yet Allgreens excels at it as bigger, more well-known extractors struggle — and you don't have to buy a special battery to use them. Those juicy, solventless hits of Papaya OG and Sour Sans Souci rosin taste even better when they cost less, and getting your vape pods at Allgreens makes sure of that.

We appreciate eating our weed the old way, but in today's legal cannabis market, the old way is the rare way. Yet Alice B. Toklas would be happy to know that Sweet Mary Jane's is still going strong. The Boulder cannabis bakery's classic snack lineup of pot brownies, cookies and brookies is simply better than others, with more crunch and buttery crisp than we've come to expect from packaged edibles. The horchata cookies, made with vanilla and cinnamon chips, taste like they came from Trader Joe's instead of a pot shop. Even the Sweet Mary Jane's chocolate bars, an overplayed edible for most at this point, are tasty. Flavors like French toast and peanut butter crunch hit all the right notes, using small bits of cereal to make a big difference. The biggest stoner delight, however, is the milkshake and fries bar, a malted chocolate bar topped with shoestring potato chips.

We often forget that most of the population doesn't eat weed on the regular, and that doses of 5 milligrams of THC or lower are a good thing. Such serving sizes are difficult to come by in dispensaries, however, where most edibles are split into 10-milligram pieces — but maybe you'll get Lucky. The Denver edibles manufacturer's low-dose mints and tarts, sold in packs of fifty 2-milligram servings of THC, are a safe starting point for new users and an effective delivery for microdosing. Building off the popularity of the products, Lucky has also released 2-milligram tarts with cannabinoids like CBD and CBG for a more specific effect that doesn't include getting baked, whether it's for a microdose in the morning or after a long run. 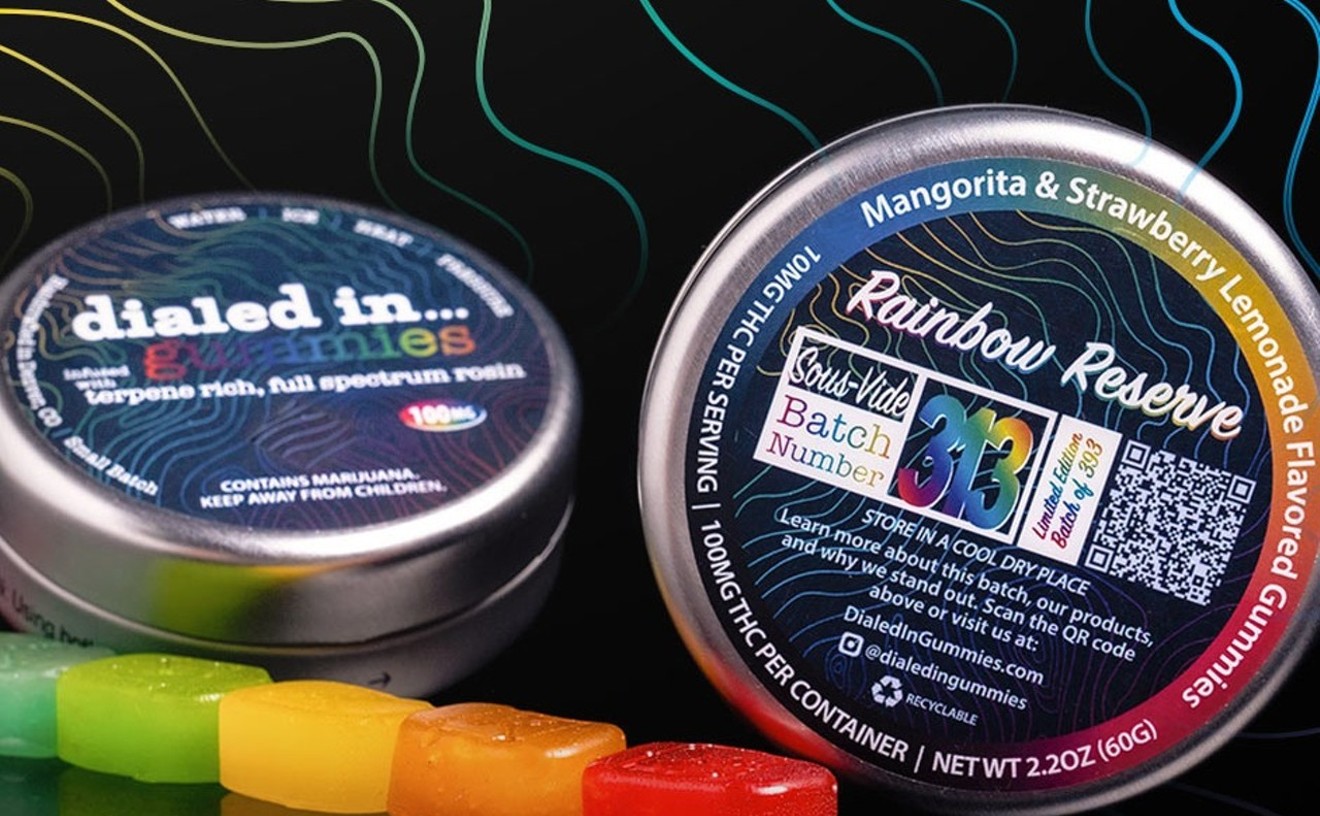 Courtesy of Dialed In

There are so many options for weed gummies at dispensaries that picking out a pack can be disorienting, and most customers end up buying whatever's cheapest. If you're looking for a brand that deserves your loyalty, though, Dialed In has been working really hard to earn it. Colorado's first edibles maker to embrace rosin, Dialed In uses a sous-vide process to infuse gummies with rosin sourced from some of Colorado's most popular growers and extractors. Each package lists the strains and cultivators used in production, with gummy flavors picked to match the terpenes from each cannabis strain. Compare that to most distillate edibles using distillate from who knows where, and it's an easy choice. 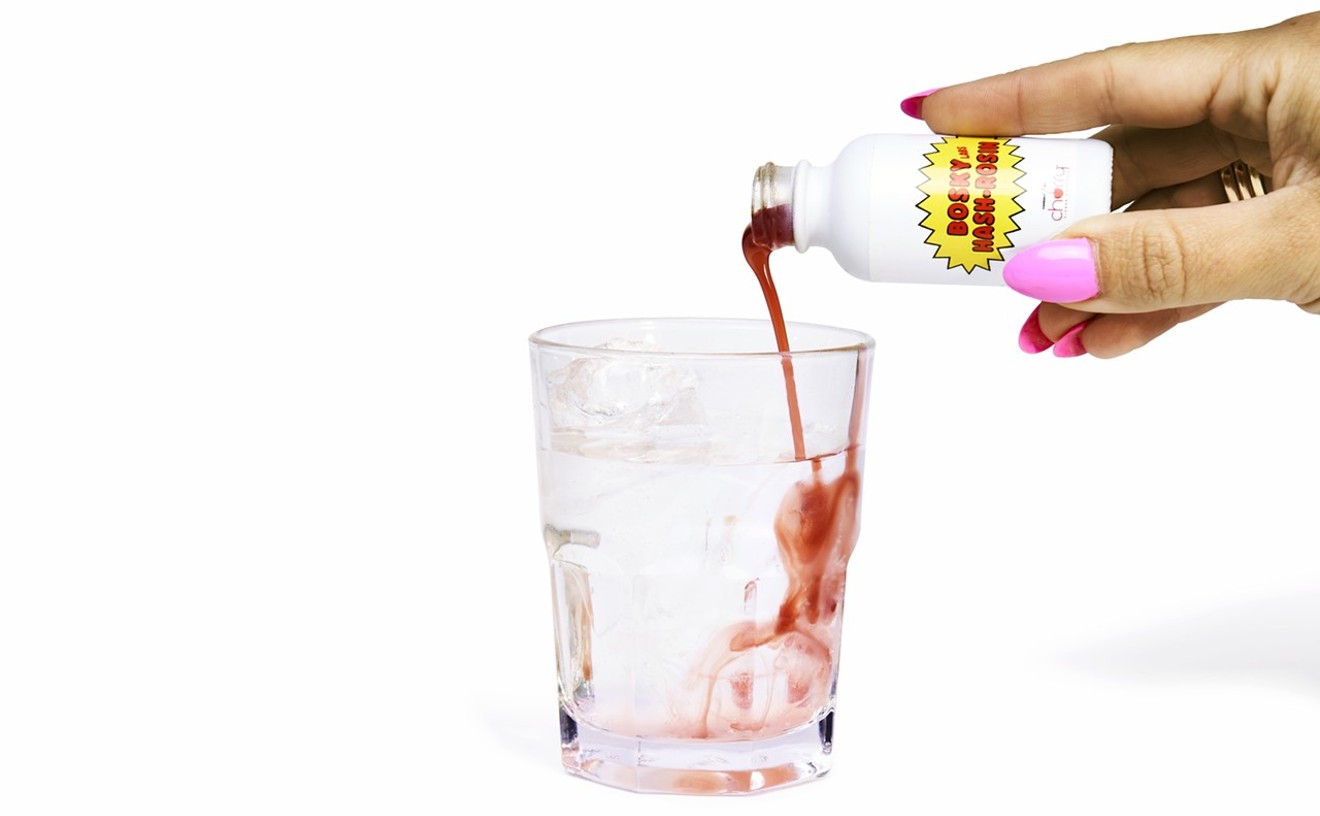 A partner with the Cherry cultivation, Bosky Labs is riding the rosin wave past dabs and gummies, right into our drinking glasses. Founded by East Coast transplant Steve Fried, the rosin edibles brand specializes in flavored syrups that mix with seltzers, coffee and even liquor if you can handle your shit. The cannabis terpenes give any mocktail a kick, with flavors like caramel, grape, Irish cream, raspberry and rosé offering plenty of options to mix it up. Keep the syrup in the fridge for multiple drinks, or drop it in directly if you can handle the aftertaste. If you're a hash head, chances are you'll like it. 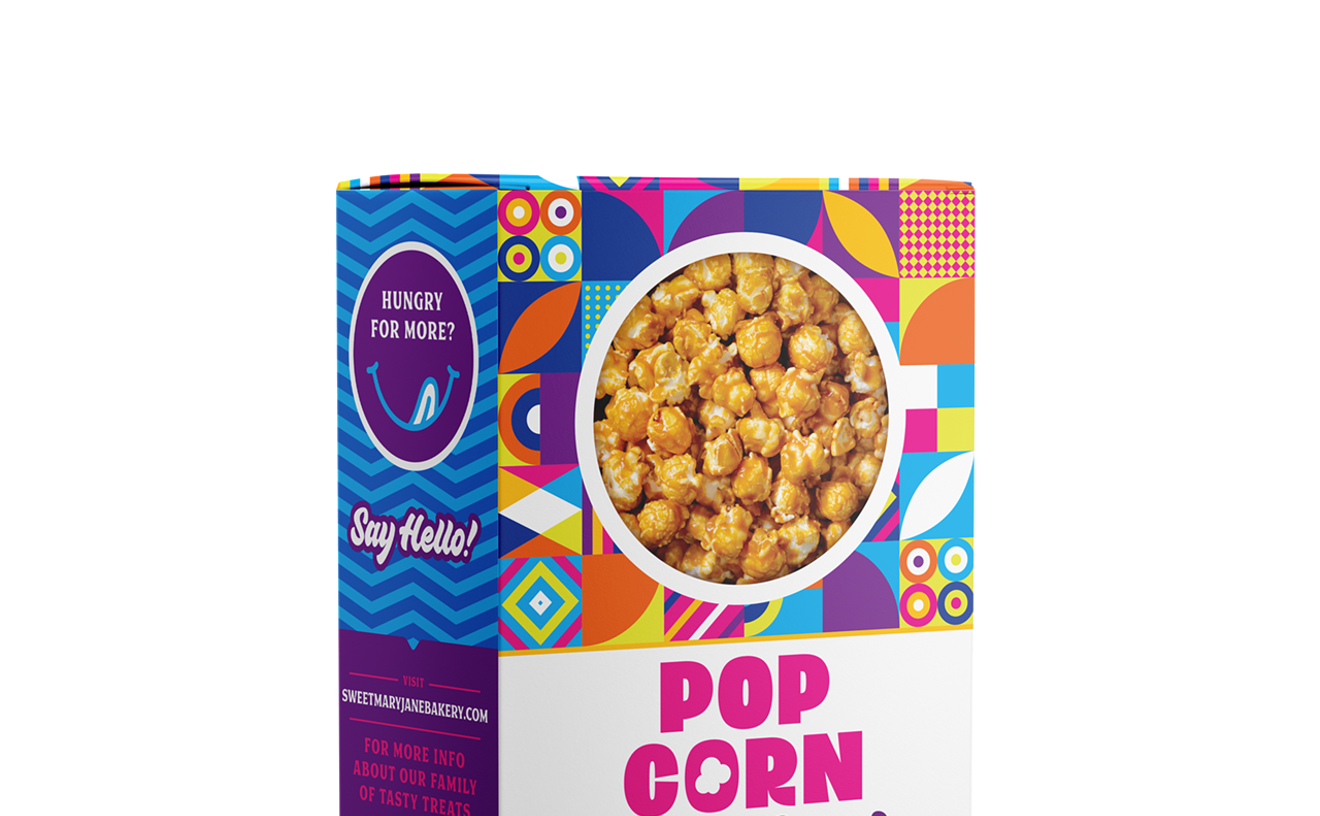 Sea salt, caramel and cheddar cheese versions of Sweet Mary Jane infused popcorn are a perfect fit for movie night (or re-creating a Christmas tin), but you can't go wrong with any one of the three. Each box is infused with 10 milligrams of THC and 100 milligrams of CBD, setting the table for one cozy night on the couch. The cannabis extract is virtually unnoticeable, and Sweet Mary Jane uses only mushroom popcorn (the brain-shaped stuff), so you don't need to worry about a dusty mixture of kernels and cannabis extract at the bottom of the bag. This stuff is seriously good, so be careful, or you'll have 200 milligrams of CBD in you before you know it.

Rosin gummies proved they were more than a fad last year. Not only did larger brands like Cheeba Chews and Rhobots launch gummies and taffies infused with the solventless extract, but local operations got in the mix, too. Leiffa makes the only rosin-infused chocolate bars that we're aware of, adding its award-winning rosin to flavors like dark chocolate and cherry, white chocolate and strawberry crumble, and milk chocolate and peanut butter pretzel. The rich flavors mask rosin's resinous flavors without tasting overly sweet, and the long-lasting body high each bar delivers proves that Leiffa isn't skimping on the concentrate quality. The recreational chocolate bars, dosed at 100 milligrams of THC and sold at dispensaries across the state, punch well above their weight class, but medical marijuana patients can also buy stronger doses at Leiffa's medical dispensary in Lakewood.