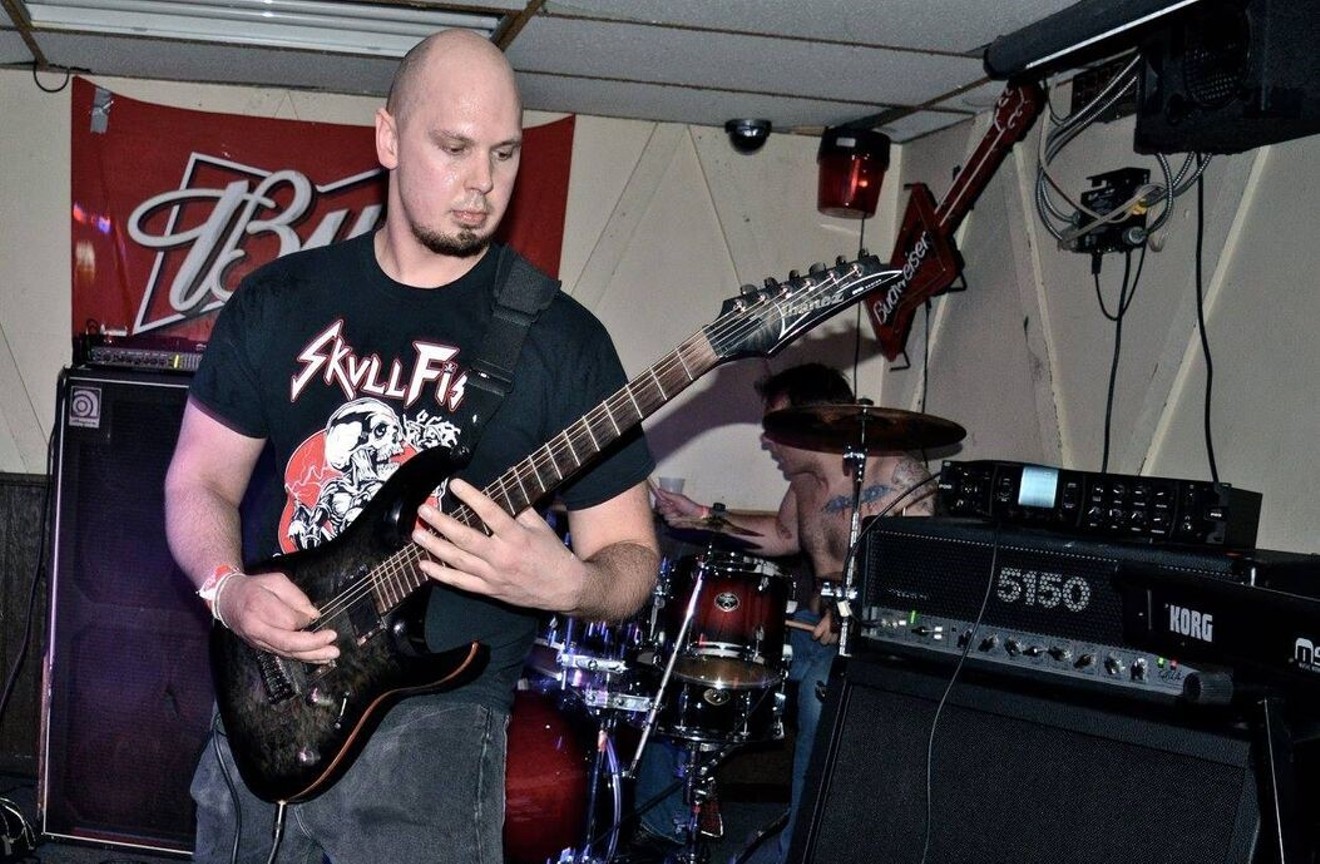 Josh Drummer's one-man death-metal band Buried Realm just released its debut album, The Ichor Carcinoma. Courtesy of the artist
Sometime around 2013, Josh Drummer woke up with night sweats and a pain in his stomach. The 26-year-old Colorado Springs metal musician visited the doctor to find out what was wrong. He discovered he had a lymph node on his neck wrapped around his jugular vein. Cancer. His doctors opted to give him an aggressive treatment that included medication, chemotherapy and surgery.

Facing death, he couldn’t help but wonder what his legacy would be. In those days, he was “just sitting around drinking booze,” he says.


So he conjured up an idea: Create a death-metal album in which he would play most of the instruments, write the lyrics, record and sing the vocals. He recruited a bevy of big-name metal musicians to play solos on the record, hired artist Daniel McBride to create cover art (a sculpture of Achilles with a sword drawn and shield in hand, with a tidal wave about to drown him and fire burning in the background), then set to work creating an album under the band name Buried Realm.

The dazzling result, which dropped September 29, is dubbed The Ichor Carcinoma. Ichor is the mythical blood-like fluid in gods’ veins; carcinoma = cancer.

Everything about the project is epic: the melodic solos, the grinding vocals and the kaleidoscopic layering of instruments, with nearly everything — with exception of solos showcasing the talents of members of Arch Enemy, Soilwork, Wintersun, Vital Remains and the Black Dahlia Murder — played by Drummer. (He did find Ryan Strain — a singer to provide clean vocals on some of the tracks — in a search for vocalists on YouTube.)


“Some of the songs go into the sheer terror of the moments that I experienced going through the process of the surgery and being put under,” he says. “One of the first times I was put under, my lungs had dropped. It scared the hell out of me.”

The album chronicles that fear, but also his resilience and his will to survive.

The project is a metal masterwork, a legacy Drummer would have had he died. Thankfully, his cancer has gone into remission and he plans to continue developing as an artist, recording a full-length with his other band, Circaic, a project he had largely put on hold to finish The Ichor Carcinoma.

“I feel like if you’re slacking in life, the universe is going to kick you in the ass and get you on track," he says, thinking back to his cancer diagnosis. "At that time, it seemed like a bad omen among people. All my friends were getting deathly ill. My mom had gone through two breast-cancer surgeries. We all came out alive and survived. It’s just something I had to write about.”

Listen to the full album at Buried Realm's Bandcamp page.