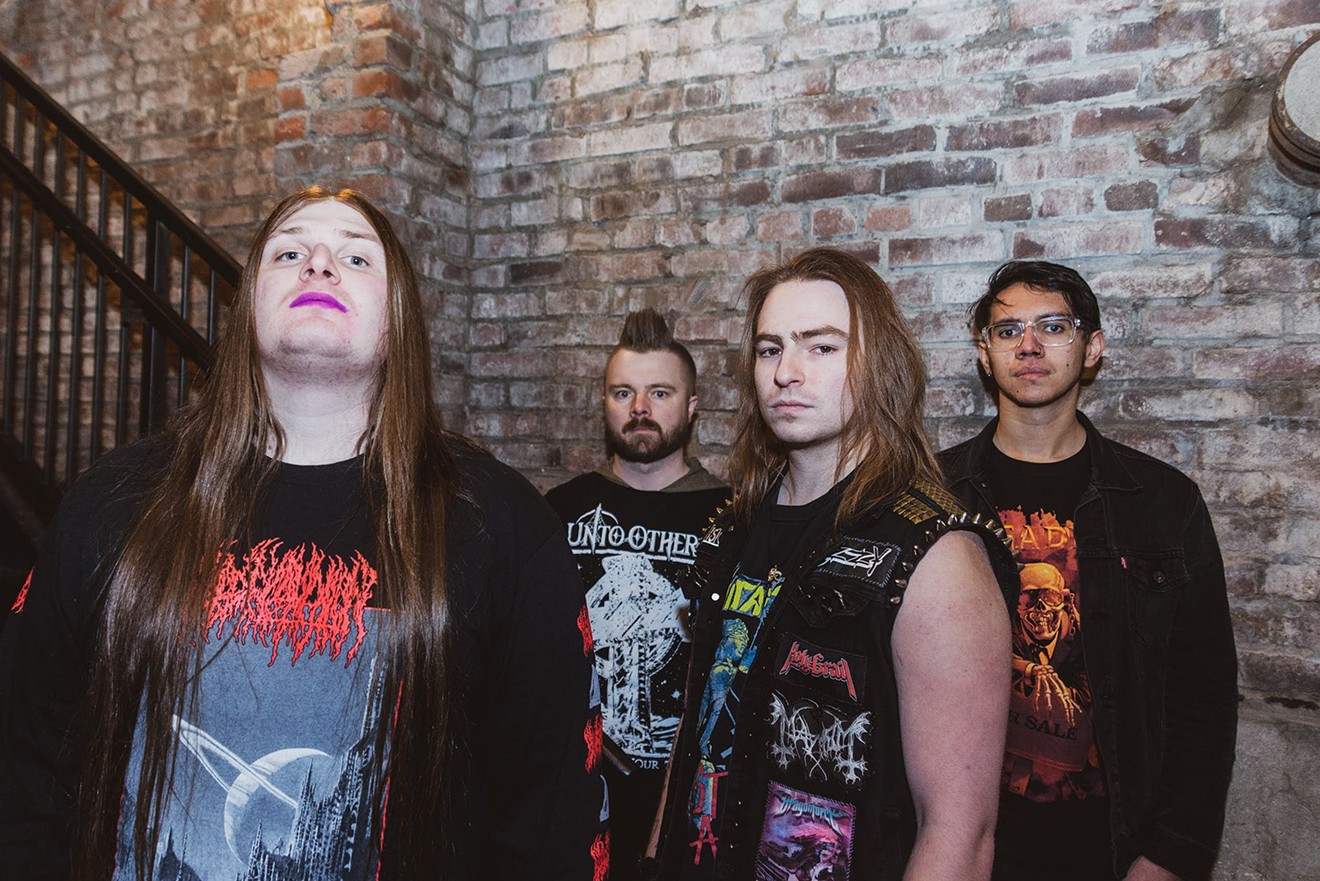 Denver’s Celestial Wizard know how to have fun while rocking out. Courtesy Celestial Wizard
If Stranger Things has taught us anything, it’s that the power of friendship and heavy metal music can save the world from certain cataclysmic destruction and ruin. Spoiler alert: Vecna, the villainous demon hell-bent on inciting the apocalypse, was eventually disposed of, for now, by the ragtag group of friends from Hawkins, Indiana, with a little help from Metallica’s “Master of Puppets.”

If Vecna returns from the depths of the Upside Down, Denver’s Celestial Wizard is the perfect band to battle him back, given that the four-piece plays “skull-crushing friendship metal,” according to vocalist Amethyst Noir.

“Specifically skull-crushing,” he emphasizes with a deadpan expression.

Guitarist Nick Daggers fails to keep a straight face, laughing out loud at Noir's proclamation before explaining that it’s an inside joke.

“That’s kind of an inside joke with the band, because with every performance, we try to bring 110 percent and leave all the blood and sweat on the stage," he says. "At the same time, we’re all really good friends and enjoy playing this music together. A lot of that sneaks its way into the performance and the lyrical themes."

Noir further expounds upon that sentiment without missing a beat.

“We want to inspire people and make them feel like they have friends," he adds. "It sounds sappy, but if they have a rough day, they can go home and listen to an album, and feel better again and not alone in situations. ... We want to bring that to the stage and make it feel like the audience is part of it."

Noir and Daggers have been friends since high school, and have previously played in other bands together, including Celestial Wizard’s former incarnation, Solarfall. Their closeness is obvious and endearing, as they regularly jab each other and snicker throughout the interview. Sharing a lifelong musical journey will foster such a friendship. The two reminisce about earlier shows and band configurations that didn’t go so well, including Daggers's days as lead vocalist and Noir on bass.

“Our first couple of shows were fucking awful. Sorry, I shouldn’t curse, but they were bad. We weren’t very good at our instruments yet,” Daggers says.

“In the early stages of that band, I was the vocalist. It was interesting,” Daggers says.

Now playing with drummer Tim Gillman and bassist/guitarist Guillermo Jurado, also close friends and musicians who have been involved in the Denver scene for years, Celestial Wizard is ready to spread its positive message of camaraderie across the land through metal.

The band's sophomore album, Winds of the Cosmos, is set to be released Friday, July 15, and a record-release show is planned for the same night at the Black Buzzard at Oskar Blues. Oak, Ash & Thorn and Draghoria are also playing.

Celestial Wizard champions a high fantasy and Dungeons & Dragons theme, complete with synths and epic choruses. But singles from the upcoming album hint at a heavier, more menacing sound than 2018’s A Sinister Awakening. Beefing up the tone and making sure the dual-guitar attack cuts through the mix was one of the band’s main focuses before recording with Nick Nodurft of Denver’s Rusty Sun Audio.

“The first album that we did was very synth-heavy. Our cup runneth over with sound. A lot of stuff was muddy. With this new album, we really wanted to trim the fat and make sure it was punchy and aggressive,” Daggers explains.

“We still have the synths, but we wanted them to be super clear and crisp. When we were writing and recording it, we wanted to make sure only the elements that needed to be in there were there. There’s room for every piece in the mix: The drums didn’t get drowned out, the guitars didn’t get drowned out, the vocals laid in there nice,” Daggers says.

The songwriting process evolved for Winds of the Cosmos, too. Beforehand, one member would handle a majority of the writing for each song, but that became more of a collaborative process. This allowed the band to explore different lyrical themes, including one track about an astronaut being lost in space.

“As a band, this is the most collaborative we’ve ever been, and the record really shows that. We all have pieces [on each song] that are important to us and that we worked hard on. It all came together a lot tighter than we could have hoped for,” Daggers says, adding that most of it was written during the pandemic. “We sat down and were like, 'This is our opportunity to really dial it in and take everything back to the drawing board, and make it sound exactly like we want it to sound.' We put the time into it that we had. There weren’t any shows. There wasn’t much of anything going on, but what we had was time to make sure it was exactly the way we needed it to sound.”

“We were like, 'If we can’t melt people’s faces in person, we might as well try to get that same effect with an album,'” Noir adds.

Vocally, Noir took inspiration from Motionless in White’s Chris “Motionless” Cerulli, while Daggers points to Metallica’s “…And Justice for All” album as his main muse during recording.

The chunky guitars and Noir’s throat allow the devil-may-care crew to lay down some serious bangers on Winds of the Cosmos, including single “Ice Realms,” which starts out with a straight-up 1980s thrash lick before melding it with power metal elements. The juxtaposition is proof that Celestial Wizard isn’t afraid to experiment across genres, and most importantly, have fun doing it.

But Celestial Wizard doesn’t want to be the only ones having a good time. As Noir and Daggers put it, audiences are welcomed to tag along on endless quests into unfamiliar territory with them.

“Our biggest thing is crowd engagement,” Daggers says. “If we can show up and crush out a show and engage with the crowd and have a cool night that’s what’s most important. … We’re all going to sweat together.”

Celestial Wizard, 7 p.m. Friday, July 15, the Black Buzzard at Oskar Blues, 1624 Market Street; tickets are $15-$18.
KEEP WESTWORD FREE... Since we started Westword, it has been defined as the free, independent voice of Denver, and we'd like to keep it that way. With local media under siege, it's more important than ever for us to rally support behind funding our local journalism. You can help by participating in our "I Support" program, allowing us to keep offering readers access to our incisive coverage of local news, food and culture with no paywalls.
Make a one-time donation today for as little as $1.