Over Thirty Years, This Bluesman Mechanic Tuned Up His Sound 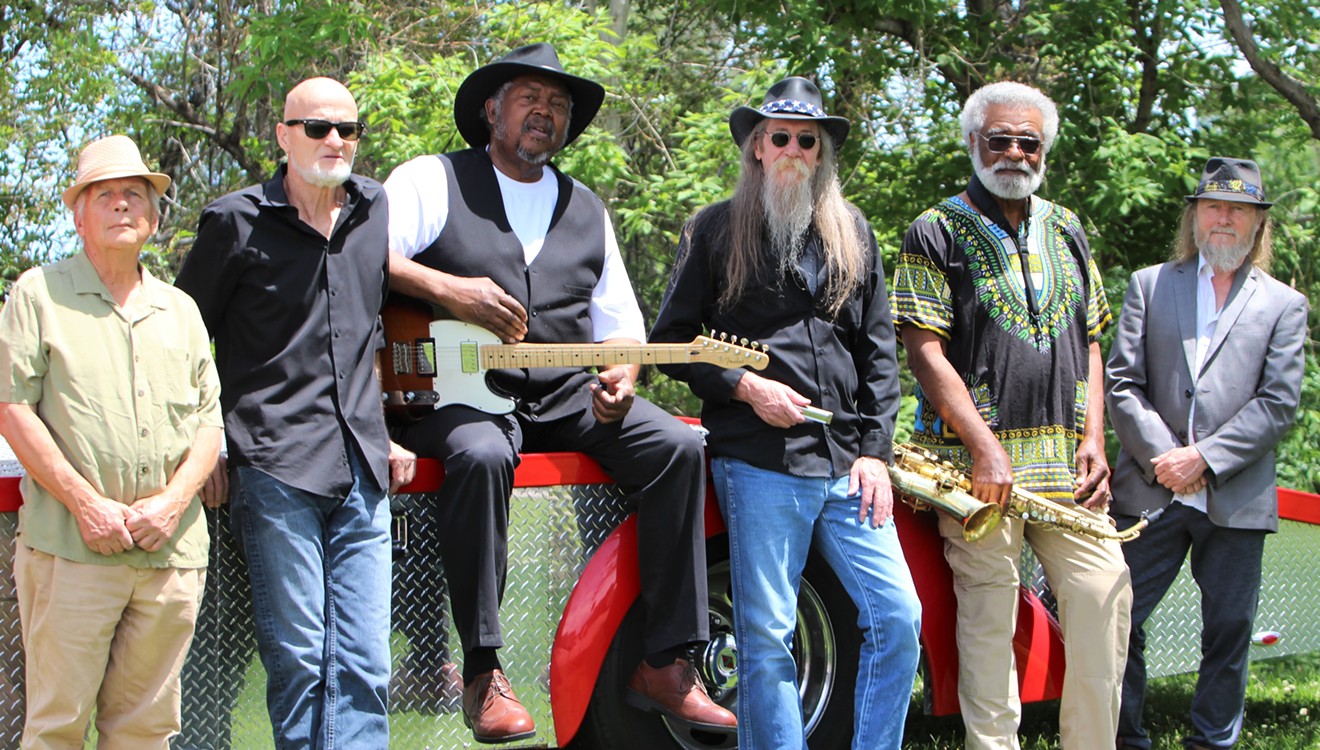 The Maynard Mills Blues Group will play the Buena Vista Mountain Mania Car Show this weekend. Val Anisimow
Denver blues musician Maynard Mills has played covers and originals for three decades on Stratocaster and Telecaster guitars. The blues, he says, are ingrained in his soul.

“Blues is a feeling I have from within, and I have had that feeling before I knew that the blues was called the blues,” he says. “Nothing in the blues is really new. I give props and respect to the bluesmen that came before me. But I think most would say they borrowed it from so-and-so, put their spin to it, and that is another song.”

Mills grew up in Gary, Indiana, an industrial working-class city that hosted its share of blues concerts in the '60s and '70s. Mills, because he was underage, would often stand outside the doors of clubs to watch classic bluesmen like Muddy Waters, Howlin’ Wolf, Little Walter and Buddy Guy perform.

“I would slip off in the evening, into the night, to listen to the sounds of inhabitants pouring their souls and spirituality into guitars, drums, tambourines, shakers — clapping hands and stomping feet on age-old hard-wooden floors,” he reminisces. “The indelible image of smoke-filled rooms, the scent of women’s perfume, the sweat pouring off dancers and the blues like I had not experienced is a reminder to me of how the blues was once played.”

Growing up, Mills also tinkered with rundown radios, record tables and old TVs that he found in alleys and trash heaps.

“With no experience outside of an active imagination, I would disassemble my finds in hopes of finding repairable pieces,” he says. “My parents had a broken high-fidelity [system] on their enclosed front porch. The turntable would not always spin. I would spin 78 RPM records by taking my finger and forcing the turntable to spin as fast as I could by hand and sometimes get the turntable to spin on its own.

“I would then take the back off [the system] and experiment with the tubes, capacitors, wiring and gearing in hopes of making the table turn again,” Mills continues, “many times, electrically shocking myself trying to get the table to turn at speed. This was the beginning of my mechanical and electrical endeavors, all in the pursuit of sound and music.”

He also picked up photography and garnered freelancing gigs.

“I photographed Chicago’s skid-row district for the Chicago Rescue Mission to raise money for the mission and occupants,” he says. “I photographed weddings, receptions, county fairs, people, or really whatever I chose to put [an] eye on. I was given a night to lecture students on photography at the union of Valparaiso University in Indiana. They wrote me up in the Torch paper [on] April 17, 1973.”

That same year, his photography took him around North America and eventually brought him to Denver, he recalls. “I decided to travel the country in a photographic search. I traveled the Canadian wilderness and south into the Colorado Rocky Mountains.”

“At that time, I would like to think that I was an innovator in cylinder-head air-flow technology,” he says. “I acquired a cylinder-head airflow bench and an engine dynamometer for the purpose of testing and increasing performance in both motorcycle and automotive engines. This was an avenue that led to building performance racing engines used in races on local circle tracks, vintage-formula-car, Can-Am, Indy Car and Sprint Car racing. I did work for individual enthusiasts and some local dealers.”

At the time, his shop was called Motorcycle Restorations. But as Mills started sponsoring racing teams, he thought the name needed a tune-up.

“To put Motorcycle Restorations on the side of a car would seem an odd name,” he recalls. “I thought airflow technology equals Flo. Dynamometer technology equals Dyne. Hence the new name for my company until today, Flodyne Racing Engines.”

In between crafting engines, Mills played blues music with a band called the 4-Casters, which helped him launch his own group, the Maynard Mills Blues Group.
click to enlarge Maynard Mills has had an extensive thirty-year run as a blues musician.
Val Anisimow
“The 4-Casters had two gigs booked for the same date and time,” he says. “The group was split into two, and I was given the frontman position for one of the groups. The drummer and bass player, along with myself, created one three-piece group. We played the gig successfully and people asked the name of the group. Gerald Sanchez, the drummer, and Vinney Tiernan, the bass player, both suggested that I was the frontman, [and] the group be called Maynard Mills Blues.”

Maynard Mills Blues Group has had various lineups since the eighties. The longest members are saxophonist Lonnie Moon, keyboardist Ralph DaFermo and drummer Tom Quinn. Newer bass and guitar players include Jodie Woodward and Rock Eubank among others. He’s also had Ron Scoggins and Bob Horn on harmonica and played with John Long, who has performed with the likes of Muddy Waters, Howlin’ Wolf and Homesick James.

Over the years, Mills has played at various Colorado venues such as Denver’s Grizzly Rose, the Phipps Mansion, Fado’s Irish Pub, Colorado Springs’ Jack Quinn’s Irish Pub and Restaurant and more. One of his favorites, he says, is Golden’s Dirty Dog Roadhouse, “a fine megawatt outdoor arena with a big stage and big sound.”

Although there’s no official release date, Mills is working on a blues album that unifies the sounds of his predecessors with a modern style and gear.

“Over the past years, I have made recordings of live gigs that were created on different medias,” he explains. “For example, cassette tape recordings, mini portable digital recorders, smartphones and Pro-Tools styles of interface-to-computer recordings. Recordings were made in sound studios that may have been as diverse as small rooms with wood floors, large rooms with sound buffers, bathrooms that give a natural sounding echo and reverb effects, etc...

“Now, old cuts are remastered to new digitalized medias, both in video form and sound monitoring,” Mills continues. “My goal is to utilize and create with new digital recorders and master from tapes, recorders and any form of measure. Part of this goal is to create a professional and pleasing style of recording that I can master and produce for a vintage and harmonic sound.”

Mills hopes his playing brings good vibes to crowds, including this weekend at the Buena Vista Mountain Mania Car Show, where his interests in vintage cars and music will collide.

“There is a transfer of energy that is very strong and undeniable,” he explains. “That leads to a healing effect that soothes anger and frustration, sadness — that can also build and release sexual tension, that can lead to love, peace and happiness.”

Maynard Mills will play at the Buena Vista Mountain Mania Car Show from 11 a.m. to 2:30 p.m. on July 10, on East Main Street in Buena Vista. For more information, visit Mills and the Car Show online.
KEEP WESTWORD FREE... Since we started Westword, it has been defined as the free, independent voice of Denver, and we'd like to keep it that way. With local media under siege, it's more important than ever for us to rally support behind funding our local journalism. You can help by participating in our "I Support" program, allowing us to keep offering readers access to our incisive coverage of local news, food and culture with no paywalls.
Make a one-time donation today for as little as $1.