The Ten Best Electronic Music Shows in Denver This Fall

Beta Nightclub Bradon Marshall
In Colorado, summer is known as the season for all stripes of electronic music because of the nonstop festivals, outdoor concerts and Red Rocks shows, but cooler weather and spookier vibes mean even more great shows in our city's wildest clubs and warehouse spaces. Here are a few of the upcoming, not-to-miss electronic music events in the coming months. 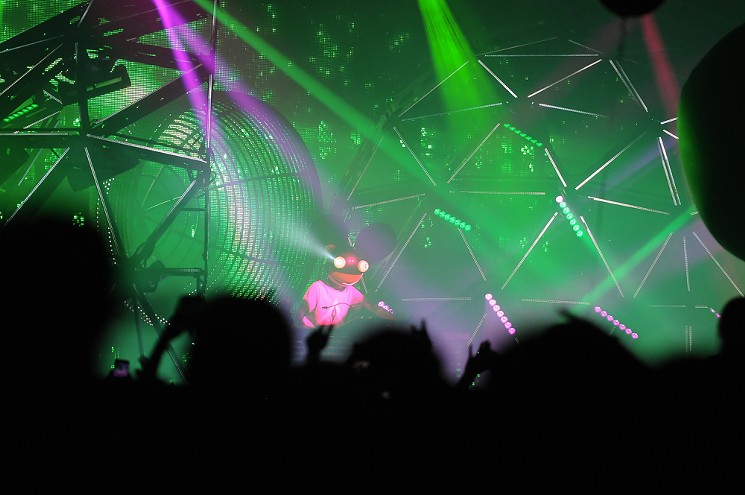 Deadmau5 playing the second night of Decadence at the Colorado Convention Center.
Miles Chrisinger
Deadmau5
Beta Nightclub, 1909 Blake Street
Friday, October 20
Everyone's favorite hype DJ, Deadmau5 still has some underground appeal, only now he's a lot more famous. He'll be at Red Rocks on Thursday and Friday, October 19 and 20, but after the Friday show, he'll head down the hill to Beta to crank out dubstep bangers and pop remixes for the club faithful. No Mana and Blackgummy will warm the place up for him.

The Black Lodge
The Black Box, 314 East 13th Avenue
Friday, October 20
Those who want to get weird with some David Lynch-themed music, doughnuts, coffee, PBR and red curtains should mark their calendars for October 20. Deejayed by event planner Ginger Perry and local entertainer L.A. Zwicky, the show will spotlight music from some of Lynch's spookiest films as well as some other fitting music.

Despise
VIBeRATION
The Black Box, 314 East 13th Avenue
Friday, October 20
While the main room at the Black Box gets spooky with David Lynch aesthetics, the lounge will be taken over by masters of drum-and-bass and dubstep. Anna Morgan, the New Yorker known for throwing massive parties and playing jungle, is headlining, and local Denver drum-and-bass icon Despise is opening, along with Hot Moxie, DRTY HBTZ and DJ Synchronicity.


HELLoween Ball
Bar Standard, 1037 Broadway
Saturday, October 28
This goth Halloween party is epic, boasting two floors and four rooms of music. Catering to all types of creeps and weirdos, the event will include an industrial pop and contemporary goth room, a dark room, an ’80s room and a green room. The horrors that await those who enter are unknown until the dreaded night itself. L.A. goth legend TR/ST is the big name on the bill.


Sorted
Cluster Studios, 3881 Steele Street
Saturday, October 21
Sorted is one of Denver's few remaining underground warehouse parties. Although the organizers behind it have thrown a few shows at the Black Box, their events typically take place outside of clubs so they can go later and harder. This year's Sorted won't disappoint, with sound-system legend Peverelist headlining and Hodge and Acre warming up the decks.