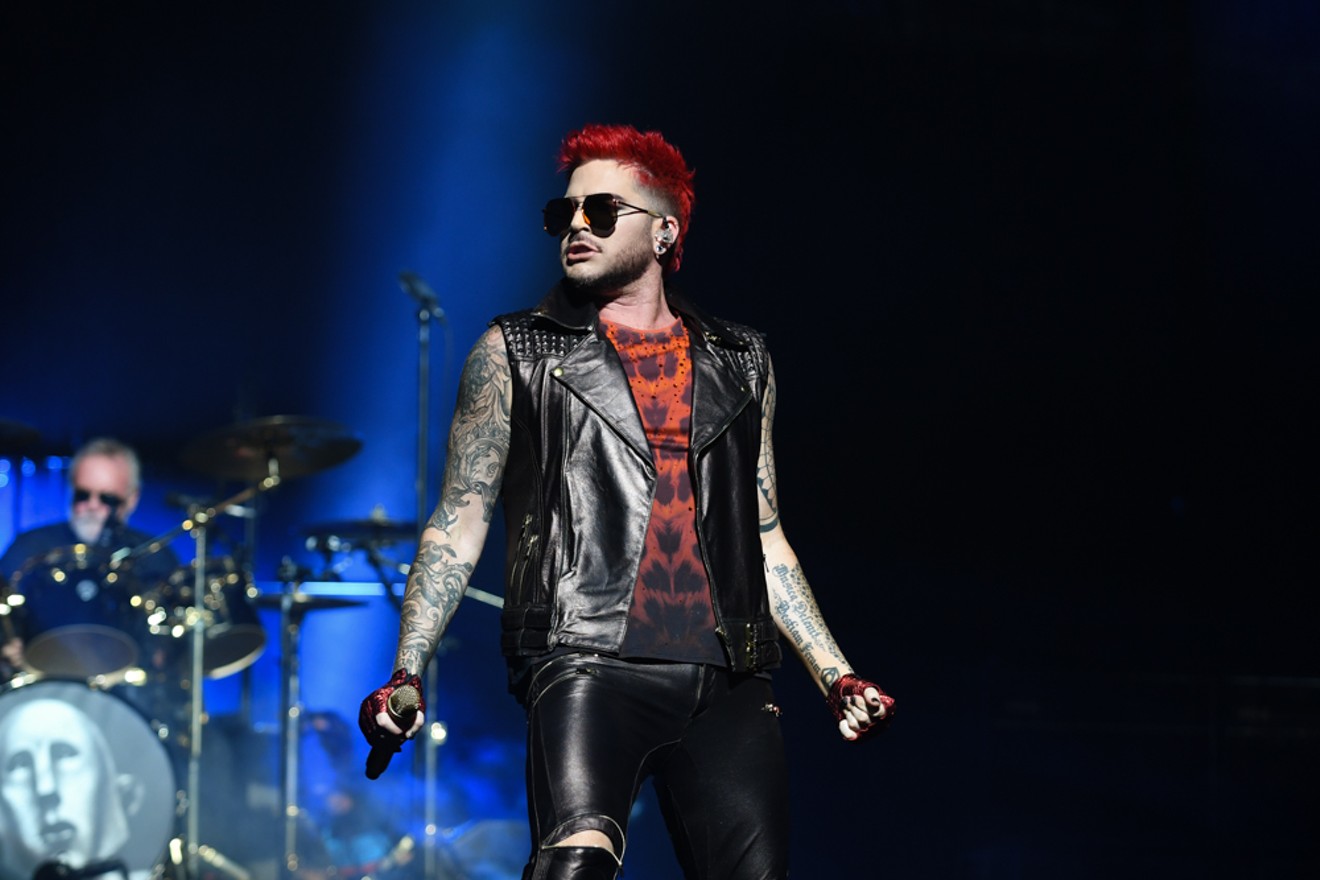 Queen + Adam Lambert performed at Pepsi Center, on July 6, 2017. Miles Chrisinger
Queen still rocks, even if the legendary band’s concerts feel like an uptempo funeral. And why shouldn’t they? People miss Freddie Mercury.

At a July 6 Denver concert, Queen guitarist Brian May was caught up in the memory of his old friend. Fans certainly were. Even Adam Lambert, who was a kid when Mercury died, couldn’t stop talking about how much we all miss the rock god and how impossible it is to fill his shoes. It’s not like Lambert hasn’t been trying; he’s been singing into Mercury's proverbial mic for the past five years, bringing something fresh and all too flawless to the role of Queen frontman, even as video projections of Mercury haunt the audience.

Our memories die hard. And in the case of Mercury, we shouldn't let them die at all.

Mercury was as queer as people come. He was kindling for homophobic parodies, a flamboyant bisexual living — and dying — in a world where bisexuality was the one thing society feared more than homosexuality.
Mercury was more than a rock star to queer boys like me growing up in the ’80s. Like David Bowie, he proved that we could flame brightly and be as faggy as we felt. He showed us how to embody that we’re here, we’re queer, get the fuck over it — even if he never used those words. And while he was sexy, strong and confident, he was also awkward enough that a misfit middle-school kid like me could identify with him.

In an era before Queer Nation, It Gets Better campaigns and the fight for marriage equality, pop figures like Mercury brought the sexual revolution raging on the Coasts into small-town living rooms somewhere in between. These out-and-proud artists made it a little easier to survive the bullies at school and the hatemongers at church, long before we were out and proud, even to ourselves.

But time passed. AIDS happened. And from a newscast, I learned in the fall of 1991 that Mercury had died because of complication from the disease. As a queer kid living in a flyover state who had not seen my community ravaged by HIV/AIDS (and who didn’t really have a queer community at all), his death signaled for me the moment that the curtain fell on the possibility of a sexual revolution. Sex became death and little else.


More time has passed. Awareness of condoms and safer-sex practices spread. Treatment options improved. Decades later, PrEP allows us to fuck with abandon. AIDS is no longer a death sentence, something those of us who came of age in the ’80s and ’90s still can't wrap our heads around.

At the Pepsi Center, watching the immensely talented Lambert prance around, singing classic Queen songs— his youth making May and drummer Roger Taylor seem that much older — I vowed to never stop missing Mercury. No matter how good Lambert is (and he's good). No matter how much I wish the band itself could move on and play new music, make more hits, write new songs.

But it can't. And it shouldn't, not as Queen. Because it's more important that these musicians in this configuration keep our memories of Mercury flaming on.

He and his generation of queer men should have been our role models, but they died in their prime.

It was hard to look at Lambert — the sexy reality-TV star who projects an unparalleled confidence — sing songs that are all about overcoming insecurity when that’s one feeling he doesn’t seem quick to express.

The one time Lambert shared insecurity on stage, it was about how he would never fit into Freddie Mercury’s shoes.

Queen + Adam Lambert performed at Pepsi Center, on July 6, 2017.
Miles Chrisinger
“I’m a fan, just like you guys," Lambert said. "I know what some of you might be saying to your neighbor next to you. ‘Well, he’s no Freddie Mercury.’ I know. I know. Believe me, I know. Freddie Mercury, ladies and gentlemen, is a god. Give it up for Freddie. You love Freddie. It really is an honor to stand up here with these legends and bring these songs to life for you tonight, because I know Freddie inspired you like he inspired me, so thank you for giving me a chance. You know, he was one of the best singers of all time, composers, style icons. I’m trying to keep up, but you know.... One of the things that I love about Freddie when I watch videos of him from old concerts — some of you were there in the flesh the first time around — when he got on stage, he didn’t care what anybody thought. If you had a problem with Freddie, you know what? He didn’t give two fucks.”

That led into Lambert’s tune "Two Fux"; Queen played along.

When Lambert broke out the glam-rock song, an anthem about how he doesn’t care what other people think, I couldn’t help but wonder just how many fucks Mercury gave — had to give — as he belted out lyrics about being beaten and bloodied, sick and alone, and yet overcoming despair. (It always strikes me how the lyrics of so many Queen songs evoke the AIDS crisis, even though they were written years before it.)

Unlike Lambert, Mercury didn’t have the option not to give a fuck; he only had the option of surviving, of sticking out his chest and strutting through a world that wished queers were dead.

We can thank LGBTQ activists for fighting for liberation, for creating a world where queerness is neither a death sentence nor a target on our heads, for paving a path so that someone as beautiful and talented as Lambert can take to the stage and express unflappable confidence, to not give two fucks, where one of his biggest problems is that people murmur that he's not as great as Mercury.

Queen + Adam Lambert performed at Pepsi Center, on July 6, 2017.
Miles Chrisinger
When I think about what Queen once had — and what it was missing when it played in Denver — it’s not Mercury’s ability to sing or his flamboyance, neither of which Lambert lacks. Queen's missing the struggle Mercury wore on his face, that awkward, proud look born from the grit it took to live an open, queer life in a culture that wanted to destroy men who loved men.

Embodying both strength and insecurity is what Mercury's Queen did for my generation of gay and bisexual youth. His songs became our anthems of survival, from our childhoods into middle age.

And Lambert, with his smooth gay millennial confidence and flawless performance style, shows things aren’t so painful or even so awkward these days. And queer men are not just surviving — we're shining. Lambert reminds us that we're looking good and singing strong, shame be damned.
KEEP WESTWORD FREE... Since we started Westword, it has been defined as the free, independent voice of Denver, and we'd like to keep it that way. With local media under siege, it's more important than ever for us to rally support behind funding our local journalism. You can help by participating in our "I Support" program, allowing us to keep offering readers access to our incisive coverage of local news, food and culture with no paywalls.
Make a one-time donation today for as little as $1.