Ian Cooke Is Leaving Denver, but Not Before One Last Dance 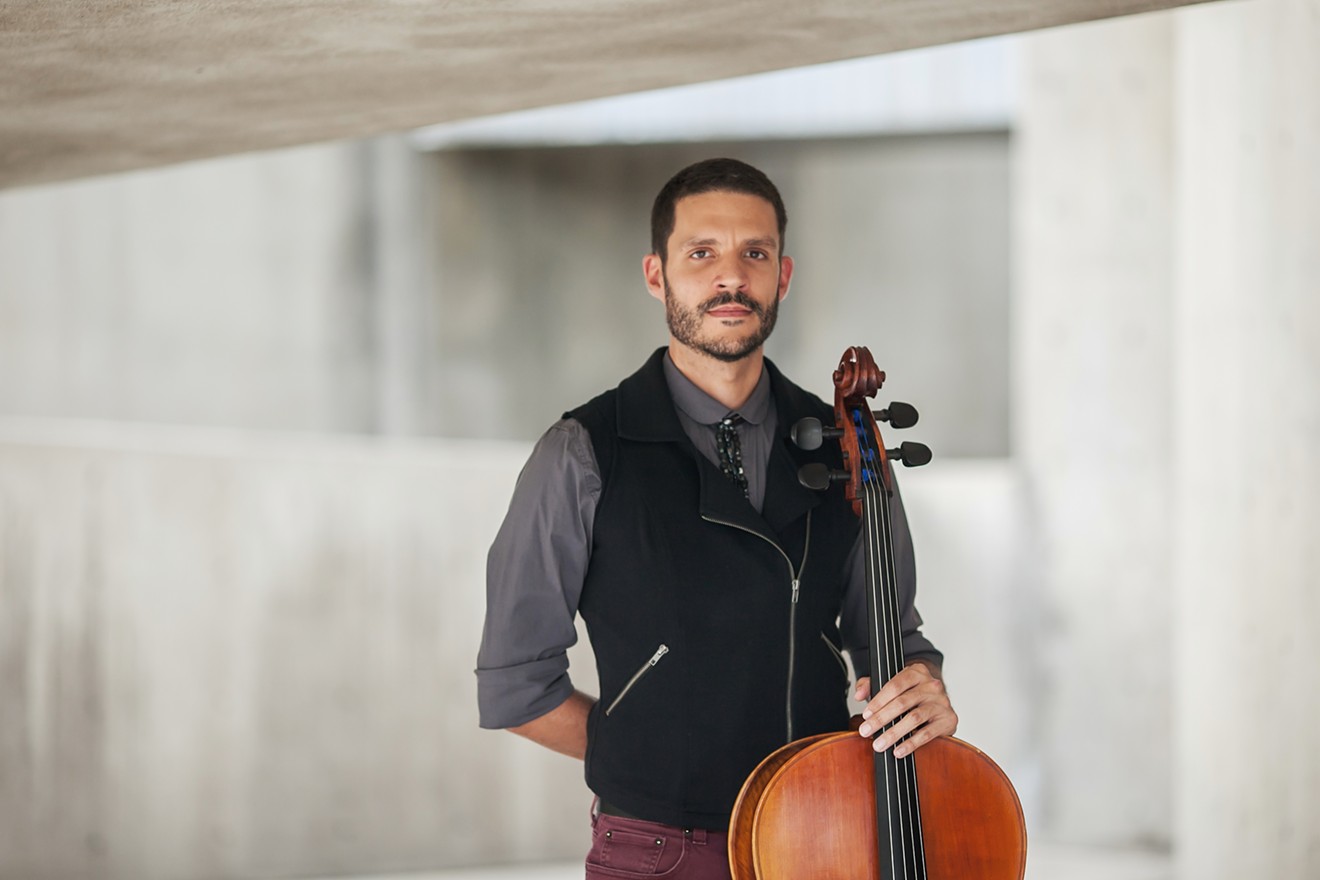 Denver icon Ian Cooke is moving to Charlotte in January. Amanda Tipton
It’s not the gentrification or the ugly condos that are driving Ian Cooke away. The reason the singer-songwriter is leaving Denver in January, weeks after the Ian Cooke Band collaborates on a production with dance troupe Wonderbound, is simple: love.

Cooke met dancer Colby Foss around 2014 when Americana act Paper Bird collaborated with Wonderbound, Foss’s company at the time. Cooke’s friends in Paper Bird set out to play matchmaker for the two.

The ordeal made Cooke — who has built his career crooning about unrequited desire — nervous; he assumed it would be a disaster. But it wasn’t. Then he worried there would be a catch. He couldn’t find one. Things with Foss were easy, and the two became boyfriends, eventually sharing a home.

They enjoyed a simple life together, Foss dancing and Cooke making music. They particularly relished Halloween, when they would enter the costume contest at Tracks nightclub. Twice, they won the $2,000 prize — once dressed as Minotaurs (mythical half human/half bull creatures), and once when Foss donned a sexy caveman outfit and dragged Cooke, dressed as a pterodactyl, on a leash. 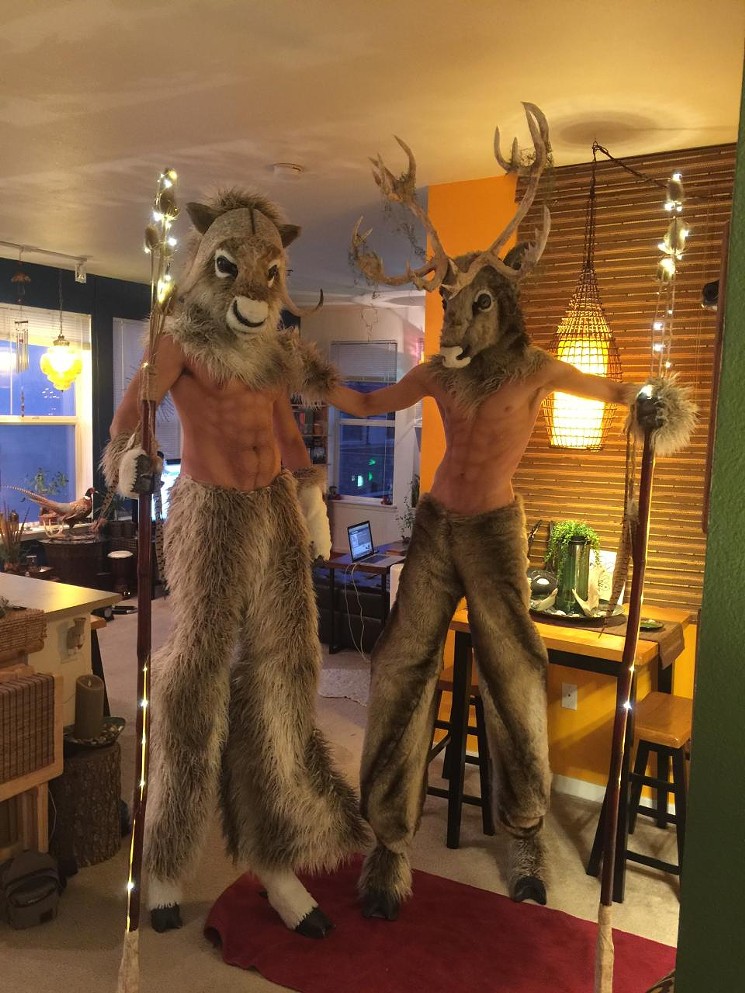 Ian Cooke and Colby Foss dressed as Minotaurs.
Courtesy of Ian Cooke
Otherwise, they led a quiet life. Foss worked long days at Wonderbound, and Cooke would stay home and try to focus on his music. Foss had summers off, so Cooke would take him on tour, booking road trips to cities both wanted to see.

More than two years into their relationship, Cooke wondered if he would be able to focus more on his career as a musician if he didn’t have a boyfriend distracting him. Foss suggested they take some time apart. Cooke took things a step further and cut ties altogether.

After the breakup, Foss left Wonderbound and moved to New York to work on other projects, and Cooke moved into a bandmate’s home in Englewood.

“I went to a really dark space,” says the musician. Alone, he had plenty of time to think about his career — what was working and where he had failed.

On paper, his life as a musician looked wildly successful. He got his start playing intimate open mics, living-room shows, warehouse spaces and DIY venues. His career ignited after the 2007 release of his first album, The Fall I Fell, a stripped-down collection of introspective tracks about longing that showcased his voice and his talent with a cello and looping pedal.

As his career expanded with that release and the formation of the Ian Cooke Band, he played bars and clubs, eventually selling out the Bluebird and packing the Gothic. He began opening for other notable Denver musicians, including DeVotchKa and the Lumineers, and national acts including the Flaming Lips, the Dresden Dolls and the Head and the Heart. While he loved performing in some dives, he preferred to play outlets that didn’t force him to compete with the din of a bar. He wanted fans to sit down and listen to him.

The more success he found, the less personal his songs became. His sophomore album was a series of aphorisms reminding him to maintain good habits. His third record, which was accompanied by its own coloring book, was inspired by his childhood love of dinosaurs. Both efforts were poetic and well received, but neither had the intimacy of his first album.

Still, he managed to scrape together a life as a full-time musician, playing everything from concert halls to weddings. He has collaborated with the Colorado Symphony and Wonderbound and has earned the respect of his fellow musicians. He’s widely recognized, a local celebrity. But his career has been anchored to Denver, and he hasn’t enjoyed the international success of the likes of DeVotchKa or the Lumineers.

Ian Cooke
Amanda Tipton
The reasons for that are varied. Cooke has neither a manager nor a publicist, nor has he developed a consistent touring strategy. Yes, he’s toured off and on over the years, mostly driving out to the coasts. His strategy was to arrive a couple of days early in a town where he had booked a concert and perform at open-mic nights, building a fan base and promoting his show. Bookers loved him. But while he collected a tall stack of business cards, he says he was too lazy to put those contacts to work. And while an artist who has produced four albums and collaborated with some of the Denver’s biggest musicians and cultural institutions could hardly be considered lazy, Cooke hasn’t really focused on developing a following outside of Colorado, which may hurt his ability to secure management.

“I regret not touring more,” he says. “As much as I love Denver, it’s really hard to leave, even though I know I need to leave it.”

Around the time of his breakup with Foss, Wonderbound commissioned Cooke to write an album on which the troupe could base a ballet. Cooke jumped at the chance — despite the awkward realization that he wanted to write about Foss, whose departure from the dance company had been tense.

He started writing new material underneath starlight, huddled up with his cell phone, jotting down notes and singing tunes into his audio recorder.

“I would go outside and stare at Venus for a while,” Cooke recalls. “Space became a theme.”

For the first time since 2007, he was writing raw, personal lyrics. Some of the songs on the new album, The Flight I Flew, include the Ian Cooke Band; others are stripped down again, just Cooke and his cello.

As he reviewed his lyrics late in 2016, Cooke realized that the breakup had made him no more productive than he had been before it. So he started sending Foss demos of the various songs he was working on, with lyrics that attempted to tell him: “I’m pouring my heart out again. I made a huge mistake. Please take me back.”

“It wasn’t worth throwing away three years of awesome partnership,” says Cooke, who asked Foss to get back together again.

Luckily for Cooke, Foss agreed — but he was in the middle of a year-long job in New York and couldn’t return to Denver. Reuniting would have to wait until September 2017, but by the time that rolled around, Foss had learned he’d been accepted as a company member in the Charlotte Ballet, in North Carolina — a dream job that he’d applied for while their relationship was still on the fritz.

When he broke the news to Cooke that he wouldn’t be coming back to Colorado, the musician decided he had just one option: move. But before he leaves, he has to finish his collaboration with Wonderbound.
Over the next few months, Cooke will perform the songs from his new album alongside Wonderbound dancers and artistic director Garrett Ammon’s choreography in Celestial Navigation, which Cooke describes as a sci-fi, B-movie ballet with a Barbarella-like space vixen on a mission to rescue her nerdy, space-obsessed boyfriend.
“It’s cool to see Garrett take the songs in a different way,” Cooke says.

He worries about Foss seeing the production, fearing that he will have strong feelings about their relationship woes being reinterpreted by his old dance company. He wants the album and the production to remain separate in Foss’s mind.

In January, Cooke, who has not lived outside of Colorado since he was a child, will go to North Carolina.

He’s looking forward to starting over in Charlotte: playing open-mic nights, touring, maybe even recruiting a new band. He hopes to start performing up and down the East Coast, where cities are relatively close to each other.

“I don’t want Denver to feel like I’m abandoning it,” he says. Although he’ll keep an apartment here, he admits that he might not be coming back for good: “I’m scared if neither of us hates it in Charlotte.”

Either way, things are looking up, he says. He’s eager for a fresh start, both as a musician and in his relationship.

“I’m so optimistic,” Cooke says, “and so thankful to have the love of my life back.”