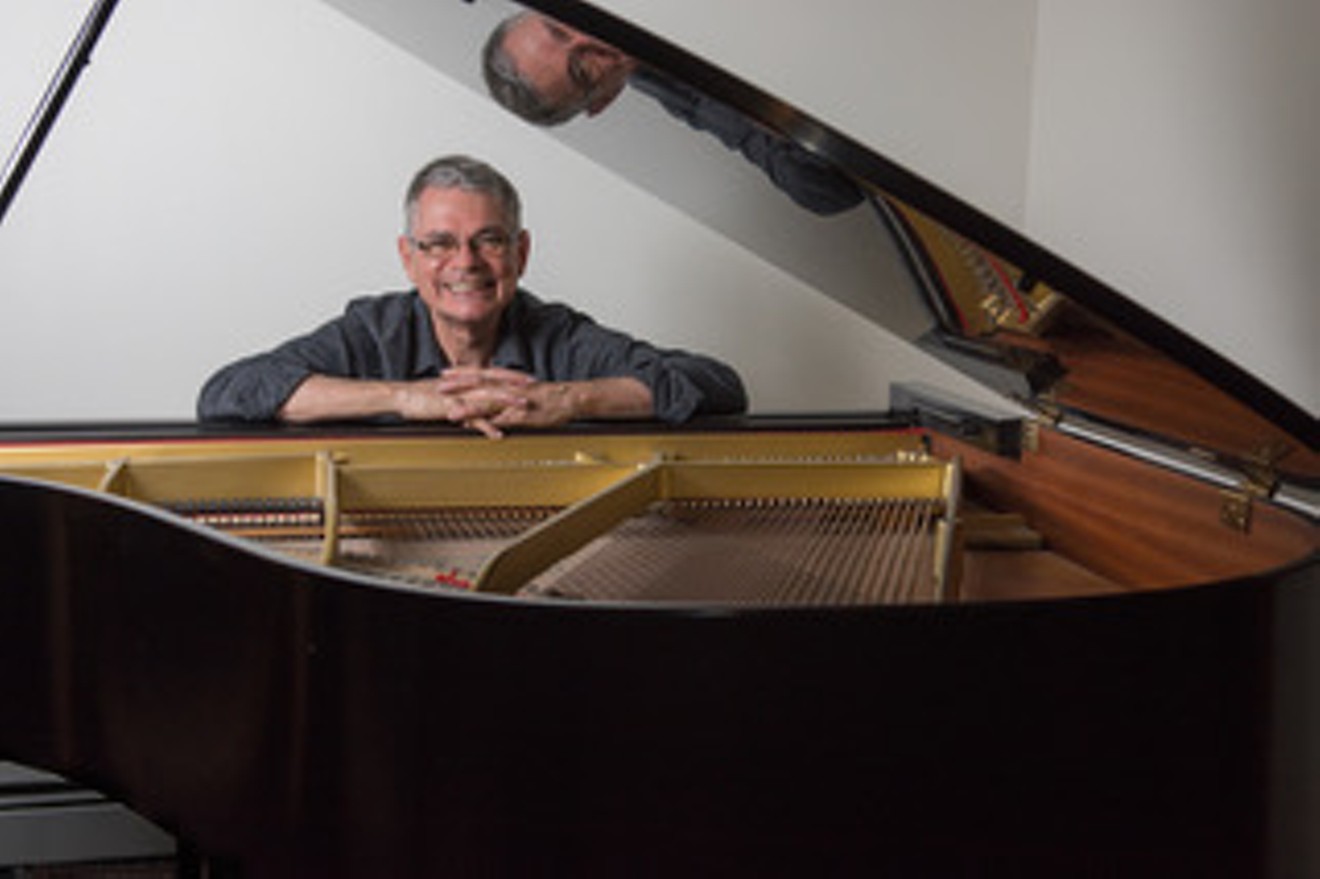 Ron LeGault runs the jazz nights at Bar 404 on Wednesdays. Courtesy Ron LeGault
After pianist and teacher Ron LeGault moved to Denver from New Jersey more than a decade ago, he became enamored with this city's jazz community, and wanted to offer more music through an accessible program — meaning free.

"The most attractive part is the quality and the depth of the young players," he says. "And the thing is that in the Denver jazz community, the people that go out and listen to music, they appreciate this, they know what's happening. It keeps all of us on our toes."

LeGault finally saw his opportunity when Kerry O'Brien and Marty Varela opened Bar 404 in December at 404 Broadway, in the former home of Rory's Tavern (and Club 404 long before that). "They wanted a music program," LeGault recalls. "Well, since I had played there about four years ago, I saw that they opened and I went in and I talked to Kerry. I had done a program before and kind of had an idea of what might work."

That idea was a free weekly jazz series, and in March O'Brien gave LeGault the stamp of approval to try it out. After a few weeks of filling the room, O'Brien asked him if he could keep the program going.

"We filled the room multiple times and it went so especially well," LeGault recalls. "I said, 'Look, Kerry, I know you're a jazz fan, but I don't think you're a part of the jazz community here, so to speak. How about if I organize this for you and I take care of booking Wednesday nights and bring in different groups?' Because it is a neighborhood bar, they want to see things that are different, offering different groups at different times."

LeGault was pleasantly surprised that after an one show, KUVO's Susan Gatschet  talked about her great experience at Bar 404 on her radio show the next day. The next week, a patron told LeGault she came in after hearing Gatschet's review. Unlike at the city's over big jazz venues, where admission can be pricey, you can hear some of the same musicians at Bar 404 for free, in a less formal, more intimate neighborhood setting.

"Ken Walker, the bassist, will be in Dazzle every month and fill it," LeGault says. "He's played three times with me already at Bar 404. ... It's a very good jazz community that's just under the radar. They come out and they support the music and they know what they're listening to."

LeGault leads the house band that often plays the club (the lineup is shifting), vur one of his favorite parts of the series is bringing in those young musicians he's seen around Denver's jazz scene. "These young guys, they come in and sit in with us, and we're all amazed at how well they can play in their early twenties. People my age are struggling to learn how to play some of this stuff," he says.

While the jazz acts that Bar 404 hosts are mostly traditional, LeGault has plans to expand on that. Venezuelan bassist Gonzalo Teppa will bring a Latin flair to the venue on July 6, and then on August 3, Nocturne staple Justin Adams, a jazz pianist, will perform with Denver legends Greg Gisbert on trumpet and Robyn Gisbert on vocals.

When LeGault moved to Denver, he quickly joined the jazz scene and maintained relationships with everyone he's played with, making it relatively easy for him to craft lineups for the Bar 404 program.

"I do a lot to stay involved in the jazz community," he says. "I was with the Colorado Jazz Workshop for about five years. When I first moved to Denver, I went around to all the [venues], to get to know the young people. The young people in Denver don't have attitudes, don't judge people. It's like anyone can come in to play. This is all for a good time."

And the Bar 404 owners have no intention of charging for those good times. "Kerry wants the people to come and see the music and be there for what it is: good atmosphere, good food, good service," he explains. "And just if you come on a jazz night, and you get introduced to this place, you're probably going to come back some other time."

You'll come not just for the music, he says, but the atmosphere. "It's a bar with a music room, but the music room is not closed off like it's inconsequential. It's a listening room, but it's not one of those ones where we tell everybody to be quiet. And the people who come here for the music, you don't have to tell them that," LeGault adds.

The next jazz night at Bar 404 on Wednesday, June 29, will find LeGault playing piano with his trio, which includes Bob Songster on bass and Curtis Fox on trombone. "We used to say back in New Jersey that something was a 'hang' to describe a good place where you were comfortable, you can come and go as you please," LeGault says. "That's the thing that's happening here."

Bar 404 Jazz Nights run from 7 to 9 p.m. on Wednesdays at 404 Broadway. Admission is free; check the weekly schedule at bar404broadway.com.
KEEP WESTWORD FREE... Since we started Westword, it has been defined as the free, independent voice of Denver, and we'd like to keep it that way. With local media under siege, it's more important than ever for us to rally support behind funding our local journalism. You can help by participating in our "I Support" program, allowing us to keep offering readers access to our incisive coverage of local news, food and culture with no paywalls.
Make a one-time donation today for as little as $1.
Emily Ferguson is Westword's Culture Editor, covering Denver's flourishing arts and music scene. Before landing this position, she worked as an editor at local and national political publications and held some odd jobs suited to her odd personality, including selling grilled cheese sandwiches at music festivals and performing with fire. Emily also writes on the arts for the Wall Street Journal and is an oil painter in her free time.
Contact: Emily Ferguson