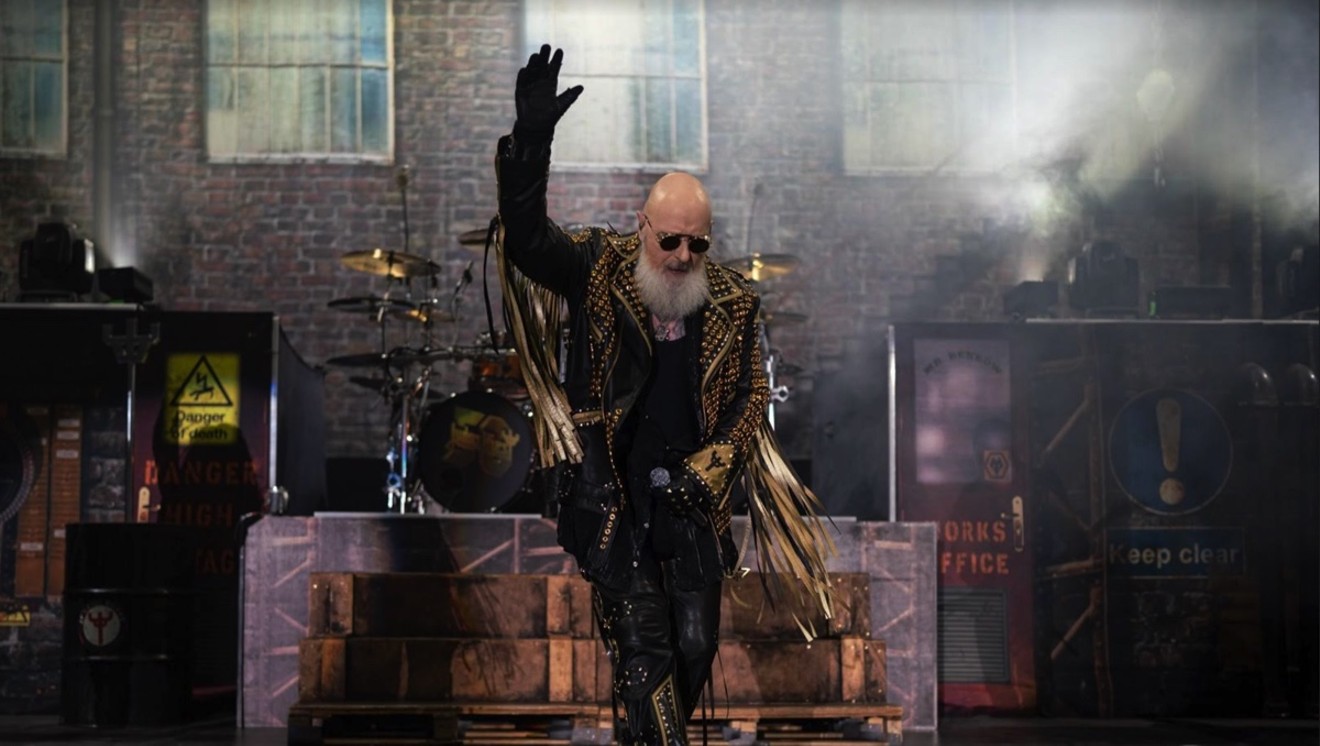 Judas Priest singer Rob Halford is an icon in the world of heavy metal. RKH Images
Judas Priest is back, baby. Well, the heavy metal icons never really went anywhere, but their much-anticipated fiftieth-anniversary tour was initially postponed because of the pandemic and then again after guitarist Richie Faulkner suffered a ruptured aorta during a concert last September.

The band put playing live on hold until Faulkner recovered from emergency surgery. The Priest axman took to social media over the weekend to announce the return of the tour:

"And we’re back!! Priest rehearsals 2022!! Feels so good to be back after so much has happened. Having these US dates has really given me something to aim for as part of my recovery process, and the guitar, as always, has been my medicine throughout,” he wrote on Facebook. “It’s gonna be emotional to see all those faces out there once again next week, and I’m really looking forward to seeing you all. Thanks for all your support through all of this and see you all soon. Hopefully I can remember the stuff!”

Metalheads will assemble in Denver this weekend when Judas Priest plays the Mission Ballroom Sunday, March 6, at 8 p.m., with Queensryche opening. And it's clear why: There are very few bands who can claim they were responsible for spawning an entire genre, let alone seemingly countless subgenres and imitators. But England’s Judas Priest, along with Birmingham brethren Black Sabbath, can say just that. In a 2010 article, British daily The Guardian claimed that Judas Priest “invented” heavy metal. Formed in 1969, the group showcased a hard-edged style of rock and roll that was more metallic than that of its contemporaries. The beginnings of what became Judas Priest's signature dual-guitar sound, perfected by K.K. Downing and Glen Tipton, can be heard on the band’s 1970s albums Sad Wings of Destiny and Stained Glass.

As the decade changed, so did Priest’s music. Releasing an album in each of the first four years of the 1980s — British Steel, Point of Entry, Screaming for Vengeance and Defenders of the Faith — Judas Priest was the epitome of leather-clad metal music during those days and at the forefront of the new wave of British heavy-metal movement that included bands like Iron Maiden and Saxon. You’d still be hard-pressed to find a self-respecting metalhead who can’t rattle off several songs from those ’80s records, which are now considered classics. Plus, the band is currently working on new material.

Halford’s pipes and falsettos are as recognizable as Downing and Tipton’s guitars. He also famously became one of the first people in metal music to publicly come out as gay during a 1998 interview with MTV.

It goes without saying that Priest has built up an impressive résumé over the past five decades. The Rock and Roll Hall of Fame, which has become a joke in certain music circles for continually snubbing metal bands, has even taken notice, recently nominating Judas Priest for the third time. The band is part of the hall’s fan vote.

“It's a great establishment, as far as what it should be and do, which is to represent all of these figures in music. It's always a place that's full of emotion and passion, because that's what music generates,” Halford said in a February interview with Audacy. “So we urge our fans to keep voting, because you have to get top five for whatever reason. We did that the last two times, I think, which gives you a little bit of a cherry on the cake, if that's the right expression. It helps you get through the door a little bit more.”

A Hall nod would certainly be nice — and would be a win for metal music in general — but let’s be honest, Judas Priest is already a timeless, legendary band in the eyes of many.

“Let's have fun with this," said Halford. "There's a lot of stuff going on in the world right now. This is cool. This is fun. Let's get some more metal in there and celebrate the success together."

Judas Priest plays the Mission Ballroom, 4242 Wynkoop Street, at 8 p.m. Sunday, March 6. Tickets are $75-$129.95.
KEEP WESTWORD FREE... Since we started Westword, it has been defined as the free, independent voice of Denver, and we'd like to keep it that way. With local media under siege, it's more important than ever for us to rally support behind funding our local journalism. You can help by participating in our "I Support" program, allowing us to keep offering readers access to our incisive coverage of local news, food and culture with no paywalls.
Make a one-time donation today for as little as $1.