Licenses Are Up for Renewal at the Mojito Cafe, the Former Purple Martini 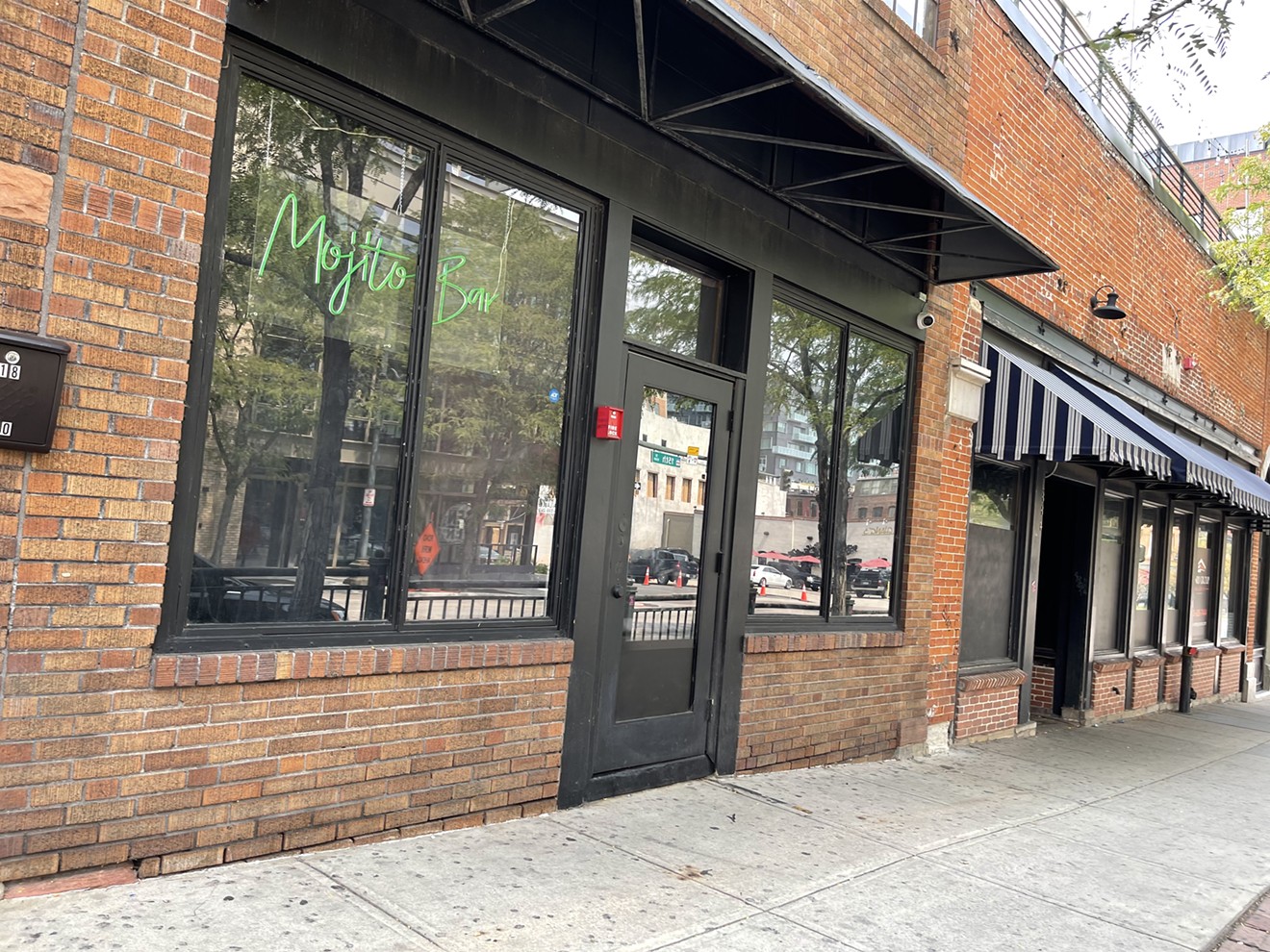 Purple Martini is now called the Mojito Cafe. Jon Solomon
Since the Purple Martini first opened in LoDo in the mid-’90s, the lounge has gone through a few incarnations...and addresses. Now owner Rachid Elmrini, who purchased the business just under two years ago and renamed it Mojito Cafe, is looking to renew the current standard cabaret and liquor licenses for the spot at 1320 15th Street, he says.

Residents, owners or managers of businesses or registered neighborhood groups located within the designated neighborhood — which is approximately three blocks in each direction from the Mojito Cafe — are eligible to attend and give their opinion.

A public hearing will take place Monday, August 16, to determine the future of the Mojito Cafe.
Jon Solomon
“There are currently 66 total licenses where you can buy alcohol by the drink, 13 Taverns, 52 Hotel & Restaurants, and 1 Brewpub within your Designated Neighborhood, and 29 Cabaret Licenses within the Designated Neighborhood,” states an email from the Lower Downtown Neighborhood Association. “The issue is whether your reasonable requirements are being met with the existing Liquor and Cabaret Licenses, or if you feel the Purple Martini has been, and will continue to be, a negative impact on the Neighborhood.

“If you have an opinion regarding the negative impact of the Cabaret License of the Purple Martini, please participate in the Hearing, and let the Denver Department of Excise and Licenses, know that you oppose the Renewal of the Standard Cabaret License of the Purple Martini, because of the negative impact on the health, safety, and welfare of the Neighborhood,” the email continues.

Elmrini notes that his business is not the Purple Martini. Whatever issues neighbors may have had, that club and its previous owners are no longer present. After closing the club just after purchasing it, he's hoping to resume operations and keep his business afloat.

The previous Purple Martini location at 1416 Market Street.
Jon Solomon
After opening more than two decades ago, the Purple Martini moved to the Tabor Center in 2005. Other locations were opened in the Denver Tech Center and Boulder before they all eventually closed by 2010.

In 2017, the rebooted Purple Martini opened at 1416 Market Street in the former home of Oak Tavern and 24K Lounge and the short-lived Lumi Nightclub. That location was replaced by the current spot at 1320 15th Street.

Since March 2021, the Mojito Cafe has been open Wednesdays through Sundays as a lounge, restaurant and nightclub, with DJs spinning regularly.

Correction: This story has been updated to reflect that the Mojito Cafe owners have already changed the name and to clarify the timeline of their ownership and its relationship to the Purple Martini brand.
KEEP WESTWORD FREE... Since we started Westword, it has been defined as the free, independent voice of Denver, and we'd like to keep it that way. With local media under siege, it's more important than ever for us to rally support behind funding our local journalism. You can help by participating in our "I Support" program, allowing us to keep offering readers access to our incisive coverage of local news, food and culture with no paywalls.
Make a one-time donation today for as little as $1.