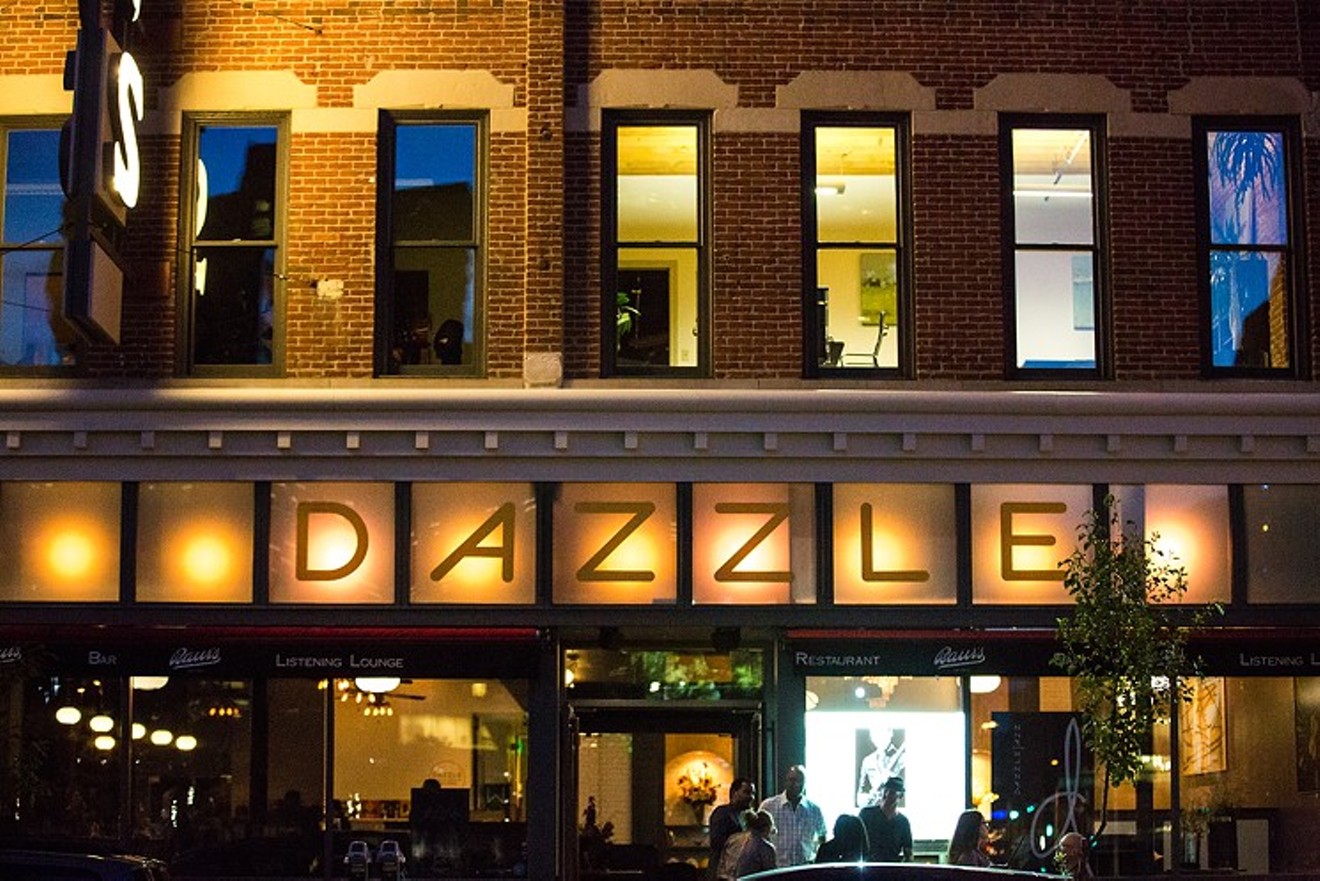 In 2001, Donald Rossa, who'd previously worked for the Fourth Story, Piatti and Sfuzzi restaurants, was brought in as a managing partner. Rossa remembers Dazzle as a gathering place for members of Denver’s media around that time. The spot was usually buzzing with conversation, but on September 11, it was a much more somber scene. That’s when Rossa decided that Dazzle needed to start hosting live jazz.

“I said, ‘We’re going to celebrate being American, and our original art form is jazz,'” he recalls. “And Miles said he was on board with it, because Miles taught me about jazz. I didn't know anything about it. I was a rocker.”

Rossa reached out to renowned local trumpeter Bob Montgomery, who gave him a list of phone numbers for other area jazz musicians. Initially, Dazzle hosted live jazz four nights a week in its bar area; over the next year, another stage was added in its second room, and the venue expanded its live-music program to every night of the week.

“The bar was always the key to that space,” Rossa says. “And then when we added the jazz supper club aspect on the other side of the room, we finally started to make revenue.”

Rossa became the sole owner of Dazzle in 2003; soon afterward, he interviewed El Paso transplant Matt Ruff for the position of general manager. He wanted Ruff to experience Dazzle's ambience during the evening. Ruff recalls the Future Jazz Project playing one of its popular Thursday night gigs; the club was often packed during the band’s long-running residency.

“I remember being blown away by the band, but also by the venue,” says Ruff, who's been Dazzle’s general manager for eighteen years.

Several music directors helped shape the Lincoln Street space over the years. Ryan Estes was in the position in the early 2000s, when Dazzle primarily hosted local acts, and Tyler Gilmore upped the club's profile in the mid-2000s by bringing in nationally and internationally acclaimed jazz legends and forward-thinking acts. Gilmore was succeeded by Steve Denny and then Kevin Lee.

“Kevin was just a powerhouse with what he did with the music,” Ruff says. “I mean, he just worked tirelessly. He pretty much did everything himself that the music department does now with four or five people. He just did an incredible job, really expanding the program.”

Over the past 25 years, acts like Robert Glasper, the Bad Plus, Kneebody, Christian McBride, Bill Frisell, Brian Blade and Nels Cline and jazz legends such as Benny Golson, Jimmy Heath, Jim Hall, Houston Person, Lee Konitz, Tom Harrell and countless others have played at Dazzle, both at the Lincoln Street spot and at its current home in the Baur’s Building, at 1512 Curtis Street, where it relocated in 2017.

Dazzle is hosting a 25th-anniversary celebration from Friday, January 7, through Sunday, January 9, with trombonist and composer Mark Patterson, who grew up in Colorado and now lives in New York, as director and artist in residence for the three-day event. Patterson will perform with local all-star jazz act Convergence, which will play an early show with singer Roberta Gambarini and a second set with Rico Jones and Max Light on Friday; Gambarini will join the act again on Saturday.

As the club enters its 25th year, Rossa remembers that by 2007, Dazzle was producing around 25 shows a week, including lunch and brunch shows. It was named one of the top 100 jazz clubs in the world by Downbeat magazine, and eventually started to outgrow its Golden Triangle digs, which could fit close to 100 people seated. In 2017, Dazzle's insurance company stated that it would no longer carry the venue if the hood in the kitchen wasn't replaced. Ruff says that cost would have been huge, and notes that there was no way to expand in the space.

"We really had reached the capacity of what we could do," he recalls. "And the bathrooms were ridiculous. If we did any kind of construction in that space, we'd have to address the bathroom issue, because they weren't ADA [-compliant].

“We talked about putting in movable windows and all this different stuff, but with any kind of major construction, the first thing we'd have to deal with would be the bathrooms," he continues. "The only way to address that would be to lose space either in the kitchen or in the restaurant itself, and that just wasn't sustainable, because it was such a small space already.”

Around the same time, David Spira, who bought the Baur’s Building in 2004, was closing Baur’s Listening Lounge, which he’d run since 2015. Spira invited Rossa to look at the space, and Rossa says that within two months, they'd made a deal. Dazzle moved there in May 2017.

The Golden Triangle spot was more of a neighborhood venue, with regulars from the surrounding area who frequented the club. But once Dazzle moved downtown, it wasn’t much of a neighborhood bar anymore. The biggest hurdle to overcome in the new location, according to Ruff, was learning how to run a much bigger space.

“It’s twice the size of the old place, but it takes about three times the work to run it, just because of running food from the kitchen to tables up in the window next to the stage," Ruff says. "That's a long haul.”

Just as Dazzle was set to start making a profit at the beginning of 2020, the pandemic temporarily forced its closure along with many other venues, restaurants and bars around the state. Rossa says its community helped keep Dazzle afloat during the pandemic, whether it was raising $40,000 for employees through a GoFundMe page, getting a grant from the Live Music Society or people just writing checks.

“The main message was ‘Just don't close’ and ‘Call us with what you need,’” he remembers.

Dazzle also helped its own community with its Bread & Jam program, a setup through which local musicians could get a free meal and food items from its pantry.

“We took care of a lot of people that just didn't have money,” Rossa says. “I hope it brought the community that much tighter together. I think that's what this industry is all about.”

Since a lot of nationally known jazz artists haven’t been touring because of COVID, local bands have been the venue’s bread and butter recently.

“One of the biggest things that's made Dazzle successful is the pool of talent that's in this area,” Ruff says. “The amount of jazz programs at the colleges here and the amount of musicians that are internationally known but live in Boulder and Denver — I think just having that local pool of talent has been the key to our success.

“I really believe that, and just being able to fall back on that and focus on the community here when the pandemic hit — I think it was really important to understand that it's these local musicians who built Dazzle," he concludes. "These are the people who were willing to support it, aside from the fact that national acts weren't touring — but still, just really understanding the symbiosis between us and the local community.”

Dazzle 25th anniversary celebration, 6:30 and 9:30 p.m., Friday, January 7, and Saturday, January 8; 6 p.m. Sunday, January 9, at Dazzle, 1512 Curtis Street; ticket prices vary.
KEEP WESTWORD FREE... Since we started Westword, it has been defined as the free, independent voice of Denver, and we'd like to keep it that way. With local media under siege, it's more important than ever for us to rally support behind funding our local journalism. You can help by participating in our "I Support" program, allowing us to keep offering readers access to our incisive coverage of local news, food and culture with no paywalls.
Make a one-time donation today for as little as $1.