Red Mountain Boys Are the Hardest-Working Band in Bluegrass 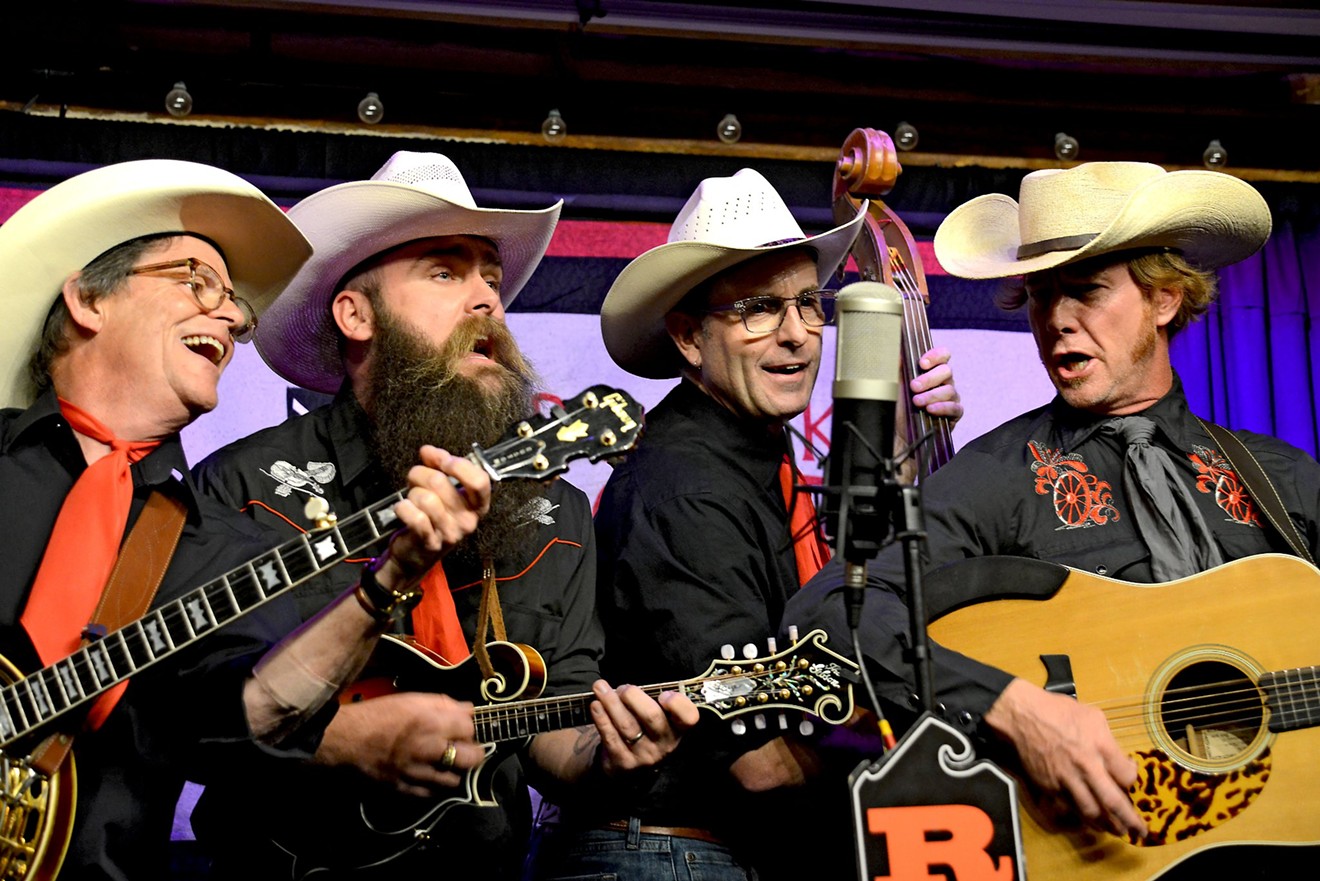 “We release a lot of music, and pretty often. We’re always releasing three, four tracks — as many as we feel like, because we have such a huge catalogue. We have four songwriters in the band, so material comes pretty quickly,” says award-winning songwriter and mandolinist Jeff Daugherty, who also has an in-home studio the band uses. “That kind of started during the pandemic, when everything was shut down. We just stared recording. ... We weren’t playing music, so it’s hard to remain relevant, so we just decided to put out a release every month, just to give the fans something to hear.”

With such an injection of new material, the Red Mountain Boys quickly dropped any covers on their set list as well. “It worked out, man. Before the pandemic, we were playing all the time. Instead of just sitting around, we just wrote songs. We went from playing, like, 50 percent covers to [not covering] anything now — it’s all original music. It was kind of a blessing, in that sense, to just be forced to take time,” Daugherty says.

Guitarist Alan Begley adds that the Red Mountain Boys write “strong songs” that anyone can enjoy, whether they’re bluegrass nuts or not. “We find a lot of people have never heard us, but then we’ll catch them singing along toward the end of the songs. We find that people are enjoying themselves,” he says.

Rooted in the genre’s traditional standards, Daugherty, Begley, banjoist/Kansas Music Hall of Famer Lewis Mock and bassist Jon Murphy look like they were born to play bluegrass, all huddled and crooning around one mic, dressed in their pearl-snap shirts and cowboy hats.

“We dress like we’re supposed to be on stage. We take pride in tradition. We sing about weed and Jesus. We hit them from both angles there,” Daugherty quips with a laugh.

For all the talk about respecting tradition, the four have a lot at their disposal, given each member’s respective background, ranging from jamgrass to Southern ballads. One of the Boys' latest releases, “High & Lonesome,” places a faster-strumming tempo behind somber lyrics.

“Jon, the bass player, comes from more of a jamgrass background. He was in The Grass Is Dead, so he comes from pretty psychedelic jamgrass. Alan has this Southern purity — iIt’s almost like Whispering Bill Anderson or something. Classic, smooth country. Lewis has this really interesting rock-and-roll style. A lot of his songs can easily be crossover rock-country because he played that style of music when it was new,” Daugherty explains. “Me, I’ve got the traditional form and songs of bluegrass. It’s actually pretty nice. It allows us to reach a bunch of different people, because you’re not sitting down to a set of old standards. We kind of hit it from all aspects. It’s been pretty fun. It makes arranging sets really fun because you can do a couple of good burner bluegrass tunes, then slow it down with a waltz, then go into almost a power ballad song.”

Armed with an impressive musical repertoire, the Red Mountain Boys have been hitting the road, playing everywhere from Indiana to New Mexico, so it might be better to see them live than try to envision what all of those elements blended together might sound like. Catch the Red Mountain Boys at Swallow Hill’s Tuft Theatre on Sunday, January 22.

“I think it comes together really well. What we’ve found is that it was real easy and felt organic. It just came together, fell together. Once somebody brings a song to the table, then we as a group will design the composition, add to it, tweak it, go over it again and again until it’s like, ‘There it is,’” Begley says. “Once we all four get a piece of it, it becomes a Red Mountain Boys song because we’re all contributing. I would say that once the song is finished, we all have a little fingerprint on it.”

Red Mountain Boys, 7 p.m. Sunday, January 22, Swallow Hill Music, 71 East Yale Avenue. Tickets are $20.
KEEP WESTWORD FREE... Since we started Westword, it has been defined as the free, independent voice of Denver, and we'd like to keep it that way. With local media under siege, it's more important than ever for us to rally support behind funding our local journalism. You can help by participating in our "I Support" program, allowing us to keep offering readers access to our incisive coverage of local news, food and culture with no paywalls.
Make a one-time donation today for as little as $1.