The Vanilla Milkshakes on Recording With Calvin Johnson

Karl Christian Krumpholz
David McGhee of The Vanilla Milkshakes: “We recorded with Calvin Johnson at Dub Narcotic Studio at K Records. He’s a legend in the indie and lo-fi music scenes. He formed Beat Happening and helped launch Beck and Built to Spill. Of course I wanted to work with him. He wears an engineer’s jacket and only works in analog. He speaks in monotone, with no affect. He just stands still at the end of the room while you record. It’s just his way.

Karl Christian Krumpholz
“So we recorded with him in Olympia. When we were doing the vocals to our song ‘We Sound Shitty So Spin Will Like Us,’ I ad-libbed: ‘We sound shitty so Calvin will give me the time of day.’ After the song, I offered to re-record the vocals, but he just shook his head, crossed his arms, and said in his Sigma-bass monotone, ‘It’s all rock and roll, baby.’ We ribbed him for being a major icon of lo-fi music, and he ribbed us right back.” 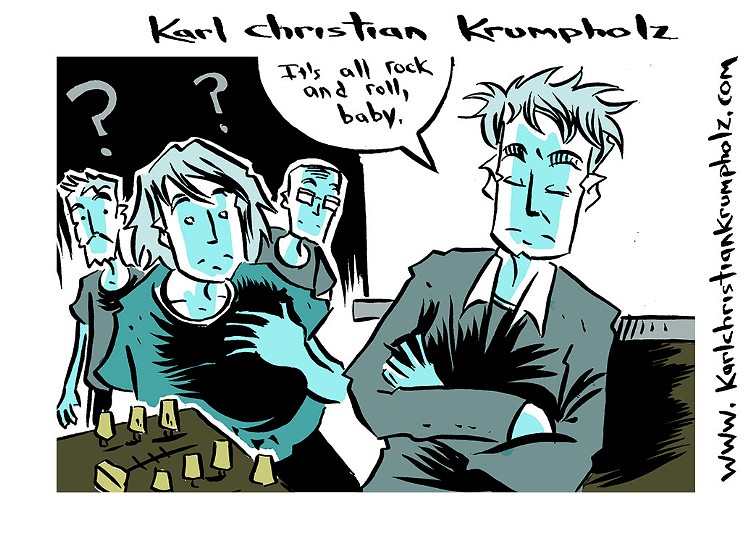 Editor's Note: The Denver Bootleg is a series chronicling the stories of local bands by longtime Denver cartoonist Karl Christian Krumpholz. Visit Krumpholz's website to see more of his work.

Listen to "We Sound Shitty So Spin Will Like Us" and more favorites from Westword writers on our Westword Staff Picks playlist.
KEEP WESTWORD FREE... Since we started Westword, it has been defined as the free, independent voice of Denver, and we'd like to keep it that way. With local media under siege, it's more important than ever for us to rally support behind funding our local journalism. You can help by participating in our "I Support" program, allowing us to keep offering readers access to our incisive coverage of local news, food and culture with no paywalls.
Make a one-time donation today for as little as $1.