The Velveteers Debut New Video Ahead of Colorado Concerts 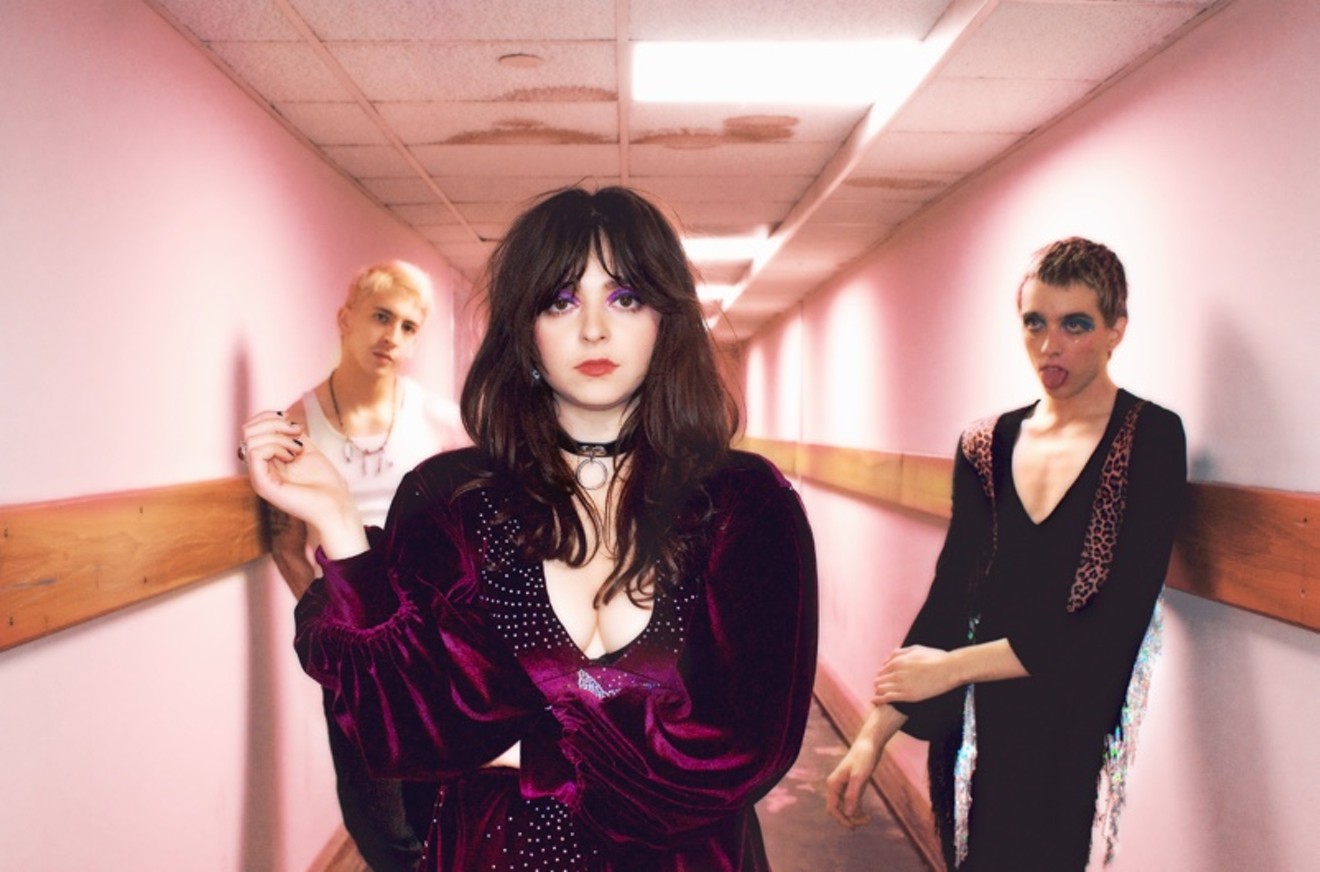 The Velveteers Marlena Tranquili
The Velveteers have come a long way from the DIY house shows they played as teens around Denver a decade ago, but Demi Demitro, Baby Pottersmith and Jonny Fig haven't shed the high-energy, scrappy attitude that makes their band pure rock and roll. It's an attitude that not only pulsates through their music, but keeps them grounded after a year in which they toured with Greta Van Fleet and the Black Keys, and opened for Smashing Pumpkins. Demitro says while it usually takes "like, a year" to digest everything that happens on tour, this past year "felt like a movie. Like Almost Famous."

The natural-born rock stars, now all in their twenties, have been enjoying some well-deserved downtime before their upcoming shows in their home state, which include a stop at the Bluebird Theater on Friday, January 20, and at the Fox Theatre on Saturday, January 21.

"We've been off the road for about a month and a half now," says Pottersmith. "That was really cool to open for the Black Keys and play for their audience. They're a little bit older than the crowds we're used to playing, and they're sitting down, usually. So I think we made them a little uncomfortable, because we'd come out and look like rabid animals."

That behavior isn't reserved for the stage. "Before the Smashing Pumpkins show, I feel like we scared their crew a little bit, and maybe some of the security at the venue," Pottersmith says, laughing. "We're in this green room, [and] everyone outside was just eating lunch for the crew. Like, thirty minutes before we went on, we were all in there with the door closed, and we had this broken piece of cymbals and stuff, and we just started throwing it on the ground, and we were all just screaming. It sounded like someone was being tortured. And the door would open, and the security guard would poke his head in, and we would just be huddled around, chanting weird nonsense. That's how we get our energy up!"

Demitro laughs as she recalls playing ping-pong backstage with Black Keys frontman Dan Auerbach, who also produced the Velveteers' 2021 album, Nightmare Daydream. Auerbach saw in the Velveteers what Denver had been witnessing for a while, and "instantly dug them," he told us that summer. "They’re amazing live, and their videos are so creative. And they just sound so powerful. Any time you double-track drums on a record, it’s going to sound so heavy. Then you put that together with this baritone guitar player who is so unique, and it’s so bombastic. There’s nothing like them.”

With two drum kits, Fig and Pottersmith create crashing layers of unbridled rhythm, setting a foundation for Demitro's vocals, which manage to be both silky and guttural, soaring over her raw guitar solos. The result is a primal, grunge-laden brand of rock that sets the Velveteers apart from the swath of pop-punk and indie-pop rock bands that have overpopulated Denver's music scene in recent years. The trio's chemistry, along with that no-fucks-given attitude, only adds to its unique standing.

"When Jonny, Demi and I play together, it's something I've never experienced playing in other bands before," attests Pottersmith. "When we play a show, it's just a blur. I don't really even know what's going on, and we all injure ourselves, because we just feel each other's energy so much that we just do stupid things, but in a fun way. It's fun for a live rock-and-roll show. And with the two drums and Demi's guitar, it's just almost like caveman energy. I just think it's so rock and roll."

"It's the intensity of it," adds Demitro. "We're always finding ways to make as much noise as we can with just three people."

They may not be the new kids on the block, but even after touring with A-list veteran rock stars, their love for music is as fresh as ever. "Just from being around all these people we've been able to open for, I've kind of learned you have to remember why you started doing it in the first place and always keep that in your heart," says Demitro. "We started doing it because we love making music and making art. And there's all this stuff that happens when you start doing this; you get into this industry that can kind of push you down. It's not easy, in a way. After doing it for so many years, it can kind of make you jaded. So it's important to remember why you do it, and to always hold that close to you."

Demitro was just fifteen and Pottersmith fourteen when they started making music together in Boulder. Both home-schooled, they had ample time to practice and jam. "Baby would come over to my house, and we would spend the whole day rehearsing," recalls Demitro. "We'd go to the park for like an hour break."

"We'd lay on the grass and look at the sky, and Demi would ask me if I could hear the sound of the world moving on its axis," Pottersmith laughs. "I'd be like, 'No...I didn't know that was a thing.' And she'd be like, 'If you're really quiet, you can hear it.' And I'd listen and not hear anything but be like, 'Yeah, yeah, I hear it.'"

And soon everyone would hear the Velveteers. The band got its start in 2014 as a duo with Demitro and Pottersmith; Demitro's brother, John, soon signed on and added the signature two-drum sound. Fig joined the Velveteers in 2020, after John left to focus on his own successful group, Pink Fuzz. At that point, the band had already toured with Deap Valley in the U.K. and established itself in Denver's DIY scene at now-defunct venues like Rhinoceropolis. "Having DIY venues was really important for us," says Demitro. "That's where we really got our start, was DIY venues. And we played house shows, and we put on house shows. We just played as much as we could and tried to be in that environment."

The three friends' intensity drives them to continue to do things their own way. At their headlining shows in Colorado, the Velveteers are able to beef up the sets, bringing the audience into their world, which Demitro describes as "surrealist."
They also just created a music video for the song "Choking," off Nightmare Daydream, without telling their management. The video shows Demitro in a pink dress shredding her guitar as Pottersmith and Fig bang on their drum kits, all against a white backdrop reminiscent of the stripped-down grunge videos of the ’80s and ’90s. "With all the videos we made for our album, we had these deadlines to meet for our record label, and you get so stressed out doing that," explains Pottersmith. "And so with this one, we didn't tell the record label we were making it. We just made it and then we edited it, and then we're like, 'Hey, we made a video.' I like it a lot, because I feel like it finally just gives off this energy like our live shows."

While they plan this year's shows, they're still running off the energy of 2022. Pottersmith recalls one favorite moment, when the group had just opened for Greta Van Fleet and the crowd was very receptive. "We walked out to play our set at the beginning of the show, and everyone was just screaming and super-excited, even though they'd never seen us — we're just the opener. But feeling that energy from their fans, being gracious enough to be excited for us as well — that was something we'd never experienced in that way," he says. "After we played our set, we were walking through the hallways back to our green room. It was like nothing I've ever felt before, and it made me even more inspired to play shows and manifest that for ourselves in some way."

Both Pottersmith and Demitro have lofty goals for the future — and given that they're the Velveteers, they'll no doubt meet them.

"I think one of the things that has helped us be successful is just always really firmly believing in what we're doing," Demitro concludes. "Baby and I decided when we made this band that this was it, there wasn't any plan B, this was going to be what we're going to do, and we're going to take it as far as we possibly can. I think the most important thing you can have is just believing in yourself."
KEEP WESTWORD FREE... Since we started Westword, it has been defined as the free, independent voice of Denver, and we'd like to keep it that way. With local media under siege, it's more important than ever for us to rally support behind funding our local journalism. You can help by participating in our "I Support" program, allowing us to keep offering readers access to our incisive coverage of local news, food and culture with no paywalls.
Make a one-time donation today for as little as $1.
Emily Ferguson is Westword's Culture Editor, covering Denver's flourishing arts and music scene. Before landing this position, she worked as an editor at local and national political publications and held some odd jobs suited to her odd personality, including selling grilled cheese sandwiches at music festivals and performing with fire. Emily also writes on the arts for the Wall Street Journal and is an oil painter in her free time.
Contact: Emily Ferguson