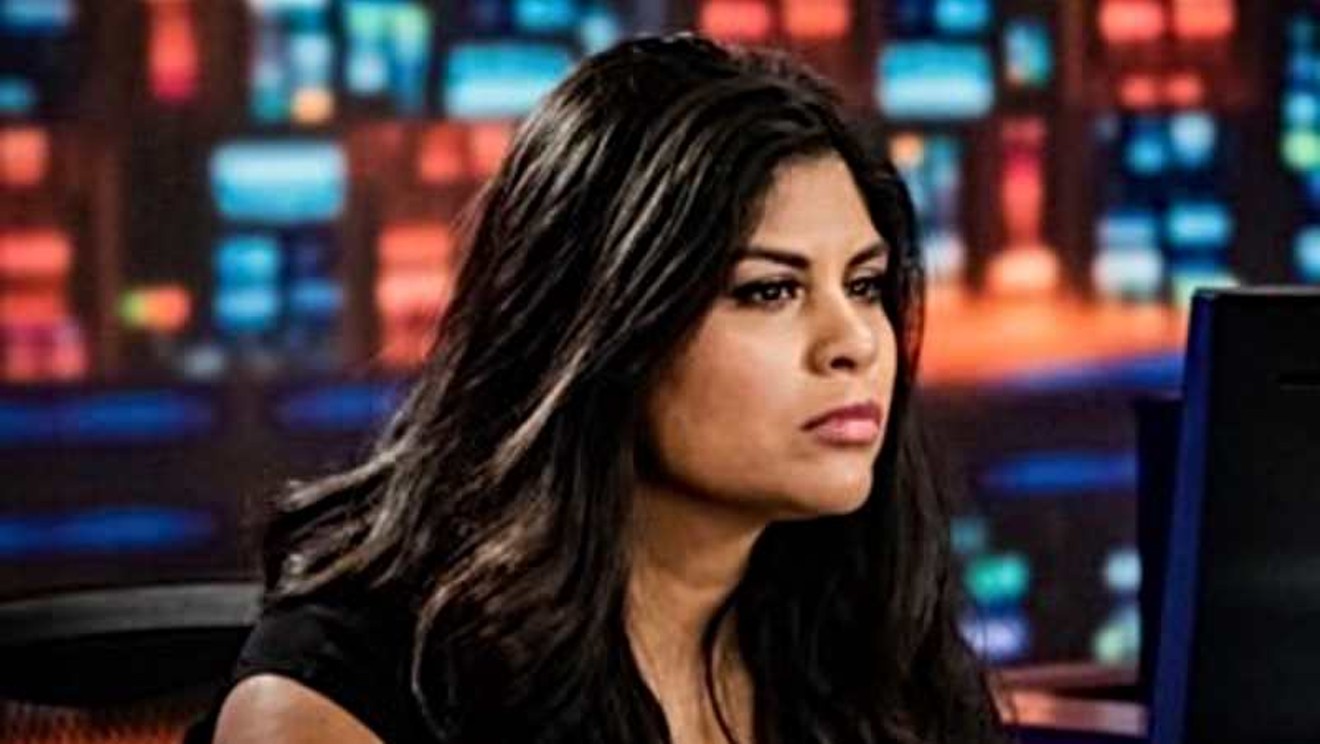 Kristen Aguirre in the 9News studio. Twitter
Last fall, 9News aired a piece lauding the bravery and fortitude of reporter and anchor Kristen Aguirre, who shared her story of surviving an ischemic stroke.

Today, however, Aguirre is out at the station, as first reported by the journalism website FTVLive and confirmed by Mark Cornetta, 9News's president and general manager and an executive at its parent company, TEGNA.

"Kristen is a beloved member of the 9News family," Cornetta writes via email. "She has shown tremendous strength and resiliency throughout her recovery over the past year. While we made a decision to part ways, we wish Kristen all the best and thank her for all that she has contributed to 9News."

Aguirre has not responded to Westword's request for comment. But she discusses what happened in an emotional Instagram video.

"Last month, 9News let me go, citing that I was no longer up to 9News standards," Aguirre says in the clip. "Does it hurt me? Yes — so much."

Atlhough television stations across the country are shedding staff amid revenue shortfalls caused by the COVID-19 crisis, Aguirre doesn't blame the pandemic for her dismissal. But she acknowledges that the quarantine has allowed her to "step back" and consider "what's important in my life." One realization she's made: "You're not what you do."

Here’s a quick recap of what happened at the station and what’s next for me. If you know me, know I’ll be fine.

In a 9News piece shared on World Stroke Day on October 29, Aguirre took viewers back to April 13, 2019, when she suffered her own stroke. "That day I don't remember much," she acknowledged. "It's kind of fuzzy. I remember the morning of, I went to spin class and then I went to a fundraiser. I remember those. After that, I just remember waking up on the floor and the paramedics coming in. So there are some big important parts that are missing."

She added: "When they [doctors] said, 'Okay Kristen, you had a stroke.' You know it's like, hard to process all that. I had an ischemic stroke which is — it's a blood clot in my brain, and we still have no idea how it was formed or why it was formed, but that's the kind of stroke that I had. Physically my left, my left arm is still pretty weak, and we're working on my motor skills, and then I had to learn how to walk again which was to me, the biggest goal."

Her condition left her with two options: "I either had to suck it up and keep pushing, or lay in the bed and don't get better." Aguirre chose the former, and over the next six months developed into someone she referred to in the third person: "She's a whole new woman and she's stronger. I thought I was a tough cookie before, but now it's like — I can get through anything."

This strength was undoubtedly necessary when she was given her walking papers, even though she concedes that she saw them coming. "I wasn't caught off-guard," she says in the video. "They were kind of leaving hints that I was no longer going to be part of the team. So I was prepared for the decision."

Still, she continues, "I don't think you're ever really prepared for someone to say, 'Cool, bye,' especially because I thought they were very supportive for a while."

Despite her disappointment, Aguirre has no negative comments for 9News or her former colleagues, whom she touts as among the best media members in the country.

Nonetheless, she says, "I don't think I'm going to stay in news."

Aguirre's plan for now is to regroup in Chicago for a few months, after which she'll likely relocate to Washington, D.C., where her partner lives. But she's also deeply involved in a podcast called Outstanding Women Leaders, which celebrates a female future that she'll be a part of whether she's in the television business or not.
KEEP WESTWORD FREE... Since we started Westword, it has been defined as the free, independent voice of Denver, and we'd like to keep it that way. With local media under siege, it's more important than ever for us to rally support behind funding our local journalism. You can help by participating in our "I Support" program, allowing us to keep offering readers access to our incisive coverage of local news, food and culture with no paywalls.
Make a one-time donation today for as little as $1.