A Father's Story: How Shoplifting Led to My Son Spending 7 Months in Solitary 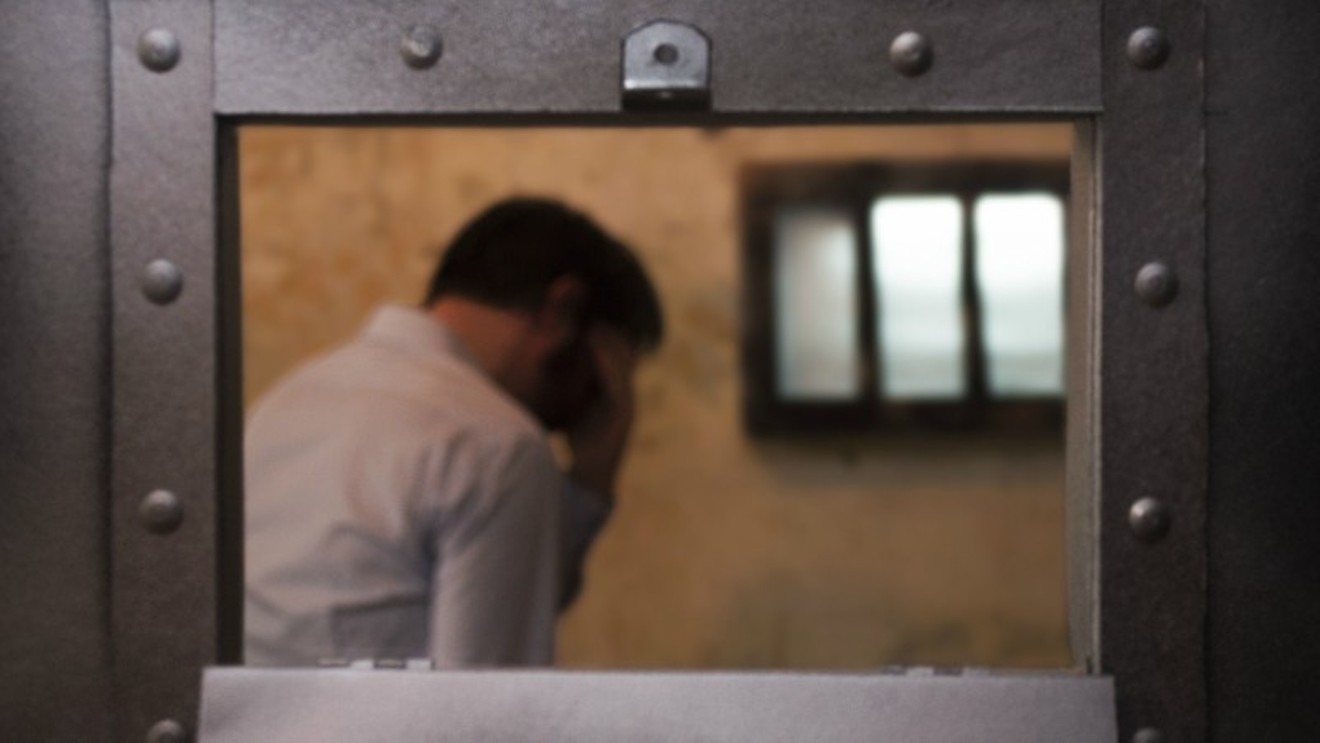 Bartle_Halpin/iStock
Later today in Colorado Springs, a young man will appear at a hearing that could lead to him spending the next five years in prison. He previously lingered for seven months in solitary confinement after allegedly assaulting a guard — a crime that likely took place because he was in the throes of a mental illness crisis for which he received no treatment following his arrest on a minor shoplifting charge.

His mental condition went untreated while in solitary, too.

Like his son, the young man's father, to whom we're referring anonymously, is beyond frustrated by the situation. After all, he'd contacted the medical staff at the jail shortly after his son's arrest, and prior to the assault, to tell them of his mental condition and need for prescriptions. But because his boy is legally an adult (he turns 27 later this month) and said he didn't need any meds, none were given to him despite plenty of evidence that they were desperately needed.

"If I am the father and you can confirm what I'm saying with a professional, which they could have done, and you don't do anything about it — that, to me, is wrong," he says. "That's like me telling you, 'Joe's over there and he has a gun and he's going to kill his boss because he got fired last week,' and you do nothing about it until Joe kills him. And now this other guy's life is ruined and Joe's life is ruined, too."

The situation in which the young man finds himself is extreme but hardly unprecedented. Last year, we told you about another mentally ill man who spent eight months behind bars for spitting on a police officer, and during his stay behind bars, he received no restorative care, either, owing to chronic tardiness by the State of Colorado in getting treatment for mentally ill prisoners.

A legal battle over the mentally ill being warehoused in Colorado jails has been raging for ten years, and the state recently cried uncle, entering into a consent decree intended to radically shorten treatment delays. In the meantime, not one but two new pieces of related legislation — Senate Bill 19-222 and Senate Bill 19-223 — were introduced last week with the goal of forcing Colorado to take better care of those suffering from mental illness.

"Not fixing the system will create more costs for taxpayers and worse outcomes for our community members," says Lauren Snyder, state policy director for Mental Health Colorado, which is backing the bills.

Snyder is optimistic about the pieces of legislation, which have bi-partisan support; Lois Landgraf, a Republican representative, is a co-sponsor of both bills, joining Democratic senators Pete Lee and Tammy Story, as well as Dem reps Mike Weissman and Daneya Esgar. But while passage could help future mentally ill Coloradans get the help they need both inside and outside the criminal justice system, the young man from the Springs remains stuck in a dilemma that has already caused him untold pain and heartbreak and could well continue to do so for years to come.

His father says that up until about eight years ago, his son "was doing excellent at school and he'd been accepted into one of the best college business programs in the country. But then his mom, my wife, passed away from cancer. They were very close, and I asked him to go to counseling, but he didn't want to do it — and he began self-medicating. Alcohol, marijuana, stuff like that."

Over the next few years, the young man went through ten different detox programs, but while he would seem to do better for a while, none of them stuck. Meanwhile, he was diagnosed with schizophrenia and bipolar disorder, and his father says that after a psychiatrist prescribed Xanax and Klonopin, "he got hooked on them."

In 2015, the young man moved to Colorado Springs; according to his father, he chose the location in part because the state had legalized limited recreational cannabis sales. But because he was still struggling, he entered another mental health program, this one operated through Penrose Hospital, where he was placed under an M1 hold — meaning that he was considered to be a danger to himself and others. He was ultimately prescribed lurasidone, an anti-psychotic drug popularly known as Latuda that's used to treat schizophrenia, "and it worked pretty well, when he was taking it — which he didn't always," his father acknowledges.

The El Paso County Criminal Justice Center in Colorado Springs, commonly referred to as the CJC.
Google Maps
Unfortunately, the young man was off his meds in early March 2018, when he was busted for shoplifting at a Colorado Springs mall. After his father found out, he reached out to the El Paso County Criminal Justice Center in the Springs, known colloquially as the CJC, where his son was booked. He subsequently told medical personnel of his son's ailments and mentioned that he had attempted suicide at least once in the past. He also offered to provide reports and contact information for doctors at Penrose about how important it was that he be on Latuda, as well as approximately 300 pages of reports from other medical facilities. But because his son insisted that "there was nothing wrong with him," his father says, "he didn't see any doctors and he wasn't put on any medication."

Five days later, the young man allegedly hit a guard and was placed in solitary, much to his father's horror: "Imagine what it's like to have anxiety and schizophrenia and all this stuff and be by yourself for 23 hours a day without any meds."

Three months later, a judge ordered that the young man undergo a mental health evaluation, and, his father says, "the doctor, who I'm in contact with, found him to be incompetent. He was saying stuff like he was married when he was seven years old and he has four children, even though he's never been married and doesn't have any children. He was in a terrible state of mind, so the doctor recommended that he go to the Colorado Mental Health Institute in Pueblo to be returned to competency."

The original estimate for his transfer to CMHI was 21 days. Then thirty days went by, and thirty more. Finally, after almost three months, his father started his own campaign to move the process forward, and with help from various contacts, including former Mental Health Colorado head Andrew Romanoff, who's now running for the U.S. Senate, progress was made. The young man was finally transferred last October, and after a few weeks of treatment, his improvement was nothing short of miraculous; his father has nothing but compliments for the Colorado Mental Health Institute crew. But his son's recovery didn't eliminate the serious criminal allegation against him, which had resulted in his bond being boosted from $1,000 to $25,000, with another $10,000 added after the young man reacted violently to being awakened during a bed check while in solitary. And it's unclear to the father whether any of the systemic problems his son has suffered will be factored into his prosecution.

In the view of Mental Health Colorado's Snyder, the young man's story perfectly demonstrates why the two new bills are needed, since they address the underlying reasons why so many mentally ill people wind up in jail, where treatment is expensive and can be haphazard or worse.

SB 19-222, dubbed "Individuals at Risk of Institutionalization," requires state agencies to "develop measurable outcomes to monitor efforts to prevent Medicaid recipients from becoming involved in the criminal justice system. The bill requires the state...to work collaboratively with managed care entities to create incentives for behavioral health providers to accept Medicaid recipients with severe behavioral health disorders" and "requires access to in-patient civil beds at the mental health institutes at Pueblo and Fort Logan to be based on the need of the individual and the inability of the individual to be stabilized in the community."

For its part, SB 19-223 places into law many elements of the aforementioned consent decree, including instituting a two-tier system in which the individuals in most need receive prioritized treatment and requires the state's Department of Human Services to "develop an electronic system to track the status of defendants for whom competency to proceed has been raised; convene a group of experts to create a placement guideline for use in determining where restoration services should be provided; and partner with an institution of higher education to develop and provide training in competency evaluations."

Snyder emphasizes the ways the two bills interact. "We need to have systems where people get services in the community where it's appropriate, so we don't use our valuable in-patient resources for people who don't need to be there." The young man going to court today "wouldn't have been in a jail cell" if there had been more options available, she feels. "With diversion and getting him onto stable medication, it would have saved a year of his life, it would have saved taxpayers the money it cost to keep him in jail for that year, and it would have opened up space in jail for somebody else who should really have been there."

To the father, the punishment his son has received to date already qualifies as both cruel and unusual, and more of the same could follow. For now, he's hoping that the courts realize there's a better way to deal with his son's problems than locking him away for years more — and he's rooting for the legislation, too. "I don't know if it will make a difference for my son," he acknowledges, "but it might make a difference for somebody else."
KEEP WESTWORD FREE... Since we started Westword, it has been defined as the free, independent voice of Denver, and we'd like to keep it that way. With local media under siege, it's more important than ever for us to rally support behind funding our local journalism. You can help by participating in our "I Support" program, allowing us to keep offering readers access to our incisive coverage of local news, food and culture with no paywalls.
Make a one-time donation today for as little as $1.