Social distancing wasn't very distant at Ameristar Black Hawk's gaming tables. Photo by Michael Roberts
During a September 8 press conference, Governor Jared Polis announced that three Colorado counties — Gilpin, Mesa and Rio Blanco — had been approved to enter the Protect Our Neighbors program, the least restrictive phase of the state's safety protocols instituted to deal with the COVID-19 crisis. So on Saturday, September 12, we headed to Gilpin County, anchored by historic Central City and its fellow gambling town, Black Hawk, to see how life had changed there since our visit to the area in June, shortly after the casinos were allowed to reopen.

The differences we found were subtle rather than sweeping; the most prominent was the return of table gaming, which had been verboten under earlier rules. But at the tables and elsewhere in casinos and beyond, social distancing proved to be a lot less distant than before.

The three phases of Colorado's COVID-19 response were dubbed Stay at Home, Safer at Home (later modified to Safer at Home and in the Vast, Great Outdoors) and Protect Our Neighbors. According to the Colorado Department of Public Health and Environment, under that last designation, "communities that meet certain criteria have less stringent restrictions than under Stay at Home and Safer at Home," and "local public health agencies have the ability to contain surges in cases and outbreaks through testing, case investigation, contact tracing, isolation, quarantine, site-specific closures, and the enforcement of public health orders." 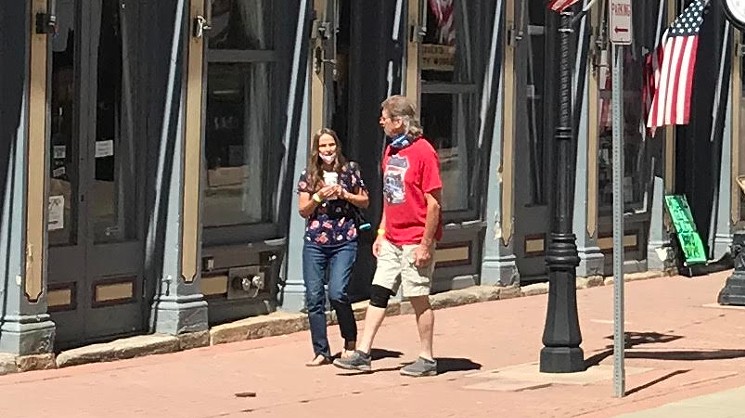 Most pedestrians in Central City left their masks down prior to entering businesses during our visit.
Photo by Michael Roberts
Certain mandates still apply to Protect Our Neighbors areas, including the statewide rule calling for the use of facial coverings in public places, which Polis extended for another thirty days on September 12.

At the outset, our early Saturday afternoon stroll through downtown Central City seemed similar to perambulating there a few months earlier. Pedestrians tended not to be masked outside, particularly when they were far away from others. But all of the people we saw had buffs, bandannas or the like with them, and covered up whenever they entered a business. The employees at stores we patronized were masked, too, and inside, most people tended to remain beyond others' six-foot bubbles. Space invading was not suddenly a thing.

Not that the streets were packed with tourists. Indeed, the main drag was all too quiet, with many storefronts vacant. The Great Depression 2.0 has undeniably wreaked havoc on the economy in this gem of a community.

At Central City's Century Casino, one of the largest operations in town, a man in front of us at the entrance tried to enter without a facial covering. The employee who took his temperature handed him a disposable mask, which he put on long enough to ride an escalator to the main gambling level, at which point he quickly removed it.

Century Casino now offers table gaming, too.
Photo by Michael Roberts
Still, he represented the exception rather than the rule. Every other customer we saw was masked, though probably 20 percent of them were wearing the masks wrong, with either their nose, their mouth or both exposed. Why so many people have yet to figure out how to put on a mask properly remains a major mystery of our time.

"Tables Are Back" announced a sign leading to one of the gaming rooms, but during our visit, not a single person was taking advantage of this opportunity. Then again, business at the Century was light in general, exemplifying the challenges for Central City operations posed by the larger, glitzier casinos just down the road in Black Hawk.

At Ameristar, an enormous gambling palace in that town, the entry procedure duplicated the one we experienced there in June: Visitors lined up six feet apart (markers were provided) and one by one had their IDs scanned while their temperature was taken.

Another look inside Black Hawk's Ameristar casino.
Photo by Michael Roberts
In the main gaming quadrants, though, the procedures were definitely looser. All of the slot machines were available for play instead of every other one being blocked off to keep a larger amount of space between parties, and while personnel circulated with spray bottles of disinfectant, ready to swab down seats and devices that had just been handled, there seemed to be fewer staffers, especially compared to the number of customers. The Ameristar wasn't shoulder-to-shoulder packed, but it was definitely busier than back in June, and if anyone was counting to make sure that a certain capacity wasn't exceeded, we saw no evidence of it.

In contrast to the Century in Central City, most of the Ameristar gaming tables were up and running, and spacing between groups of customers was generally in the one-to-two-foot range. While everyone was masked, most correctly, the separation between people looked typical of the pre-pandemic world.

In that way, table gaming seemed to carry at least some level of risk even for a county in the Protect Our Neighbors phase. But then, gambling is what Black Hawk is all about.
KEEP WESTWORD FREE... Since we started Westword, it has been defined as the free, independent voice of Denver, and we'd like to keep it that way. With local media under siege, it's more important than ever for us to rally support behind funding our local journalism. You can help by participating in our "I Support" program, allowing us to keep offering readers access to our incisive coverage of local news, food and culture with no paywalls.
Make a one-time donation today for as little as $1.