Inside Lawsuit Ruling Over Muslim Inmate Forced to Shave Beard 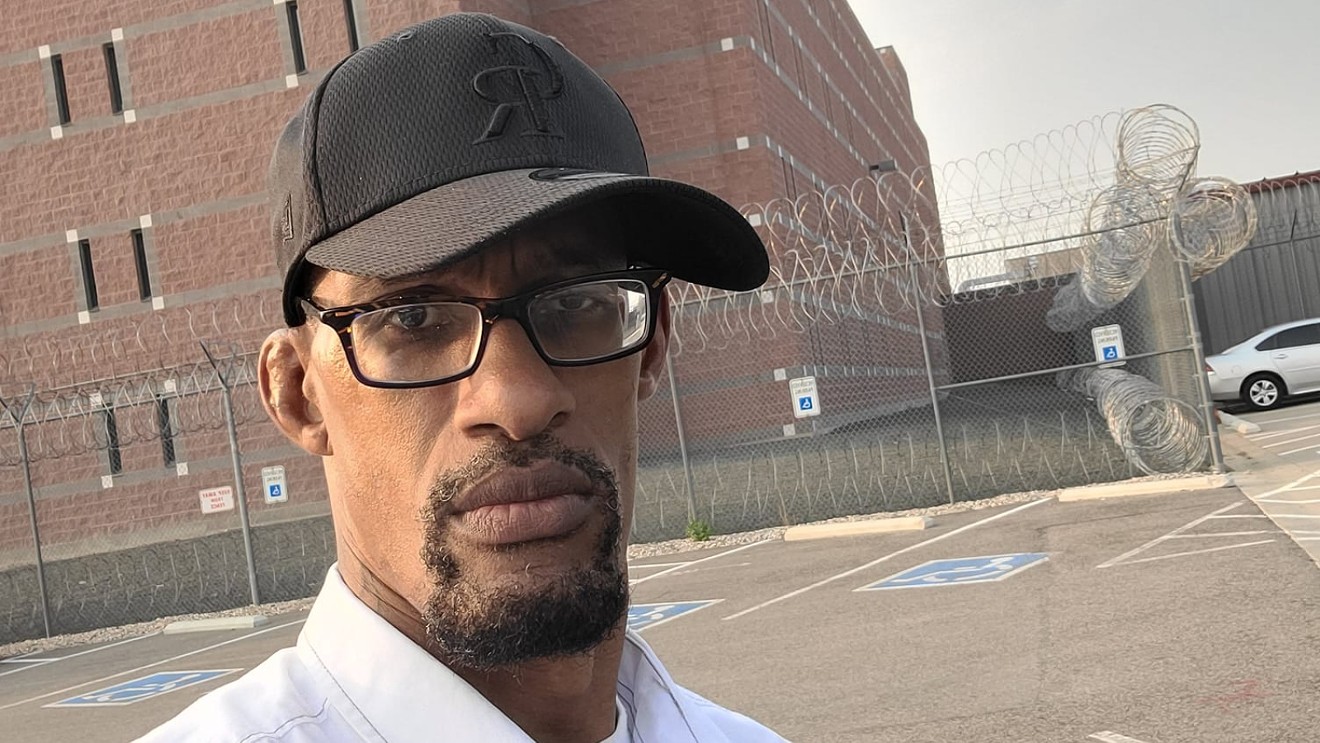 A portrait of Tajuddin Ashaheed outside Denver County Jail. Courtesy of Tajuddin Ashaheed
Social activist and community advocate Tajuddin Ashaheed is a free man today. But the devout Muslim is continuing a fight that began when he was incarcerated in the Colorado Department of Corrections — a stretch at the center of a lawsuit asserting that an order to shave his beard violated his religious freedom. And while a recent ruling by the U.S. Court of Appeals for the 10th Circuit doesn't technically hand Ashaheed a victory, his attorney, David Lane, believes it's just a matter of time.

"The facts are not in dispute, so essentially, it's a win," Lane maintains. "The state doesn't really have any defense, and now that the 10th Circuit has said, 'You've stated a cause of action,' they had to be like, 'Oh, shit. We're going to lose this case.'"

The issue has taken years to get to this point and has taken some strange twists along the way, as noted in our February 8, 2018, post headlined "Claim: Colorado Tried to Hide Guard Who Made Muslim Inmate Shave Beard." At the time, Lane explained that the defendant in the original lawsuit was referred to as John Doe because up until that point, the DOC had refused to identify the employee who gave the order.

"We've gotten no cooperation from the State of Colorado in terms of telling us who the guard is who did this," Lane said. "They engaged in a coverup to prevent us from finding the right guy to sue."

In contrast, Ashaheed's identification as a Muslim was clear from the start. It's been on record with CDOC since 1993, and was reaffirmed on July 5, 2016, when Ashaheed was taken to the Denver Reception and Diagnostic Center, the department's intake facility, to begin serving a ninety-day sentence for a parole violation.

This period took place over Ramadan, described in the complaint as "the most sacred month for Muslims," and Ashaheed had long observed the Sunnah ritual of allowing his beard to grow according to "a fundamental tenet of Islam."

This shouldn't have been a problem, thanks to Holt v. Hobbs, a unanimous 2015 decision by the U.S. Supreme Court. The case involved Muslim inmate Gregory H. Holt (also known as Abdul Maalik Muhammad), who was serving a life sentence for domestic battery and burglary in Arkansas. Because regulations in that state banned facial hair with the exception of "neatly trimmed" mustaches and quarter-inch beards for inmates with skin issues, Holt's request to grow a half-inch beard was rejected, supposedly for reasons of safety. In court, the Arkansas legal team maintained that even a short beard could be used to conceal "anything from razor blades to drugs to homemade darts."

Supreme Court jurists rejected that rationale. But when Ashaheed asked to keep the beard, a CDOC  employee said he "didn't want to hear about it" and that if the prisoner refused to shave, he'd be "thrown in the hole," according to the lawsuit.

Ashaheed reluctantly gave in and, as a result, he "spent the remaining holy days of Ramadan, and months thereafter, beardless, feeling dehumanized, humiliated, his faith having been disrespected," the complaint continues.

"This incident constitutes part of a CDOC/DRDC pattern and practice of substantially burdening and interfering with Muslim inmates’ ability to freely practice their religion, including, but not limited to, publicly demeaning Muslim practices, culturally isolating Muslim inmates, and generally fostering an environment in which the practice of Islam is burdensome to Muslim inmates. On information and belief, other religious groups do not face the same challenges, nor are they subject to the same apparent animus and burdens as those directed by Defendant Officer Doe towards Muslim inmates."

Eventually, the guard was identified as Sergeant Thomas Currington, and a state district court backed his request to dismiss the case based on one portion of the Supreme Court ruling. "The opinion in Holt is a little ambiguous," Lane acknowledges. "They said for security purposes, prisons can take a before-and-after photo — and that means they could make a Muslim inmate shave. But there was no DOC policy that demanded a before-and-after photo, and generally speaking, Muslim inmates can have short beards, so the 10th Circuit reversed the district court's decision."

A ruling on Ashaheed's behalf would be significant well beyond the incident itself, Lane says: "This opens the door for inmates who have religious beliefs to vindicate their religious beliefs when the Department of Corrections singles them out for punishment because they don't like that particular religion."

The Colorado Attorney General's Office, which is defending Currington, offered no comment about the ruling. Click to read Tajuddin Ashaheed v. John Doe and the 10th Circuit Court of Appeals opinion.

This post has been updated to include a response to a request for comment from the Colorado Attorney General's Office.
KEEP WESTWORD FREE... Since we started Westword, it has been defined as the free, independent voice of Denver, and we'd like to keep it that way. With local media under siege, it's more important than ever for us to rally support behind funding our local journalism. You can help by participating in our "I Support" program, allowing us to keep offering readers access to our incisive coverage of local news, food and culture with no paywalls.
Make a one-time donation today for as little as $1.