Lauren Boebert kissing Colorado's hopes for a rational next two years goodbye. Twitter
It's official: Lauren Boebert has retained her seat in the U.S. House of Representatives, barely fending off a surprisingly strong effort by Democrat Adam Frisch, who conceded the 3rd Congressional District race to the incumbent Republican on November 18. Although the vote was so close that it qualifies for an automatic recount, in a post-concession video exchange with reporters, Frisch suggested this instead: “Please save your money for your groceries, your rent, your children."

On Election Day, Boebert had tweeted out several predictions of a red wave, including one message at 6:40 p.m. that would age like pork sliders left out at a rodeo. “The red wave has begun. America First is winning!”

But that night, she went silent. Her next post came two days later and was uncharacteristically un-bombastic, just wishing everyone a good morning and adding that “Jesus is Lord,” a sign that Boebert mght have realized she was going to need some divine intervention, white-Jesus style.

The vaunted Red Wave not only failed to crash on the shores of the American midterms, but that political water ebbed hard. “America First” was recognized as the white supremacist and Christo-fascist movement that it is — at least by enough voters tired of the bullshit and the division and the philosophy of governing through empty provocation. The message was clear: Donald J. Trump, would you please go now? And take your evil clown show with you.

Ah, governance.
Twitter
Such was the environment in which Lauren Boebert found herself, when the spiteful and vituperative rug got pulled out from under her. And for almost a week, she stayed relatively quiet. Nice break, wasn't it?

Sadly, she is still one of Colorado’s representatives to Congress, but surely even someone as misinformed and slow on the uptake as Boebert can read the blue writing on the wall: She doesn’t have anything close to a mandate. Right? Right?

Not that she had a mandate in the first place. She was ensconced in her position as a result of the Republican slide into madness that’s taken place over the last six years, when down replaced up and obstruction replaced governance, and outright thievery — of both money and power — became the entire point. We are still, as a nation, in the act of righting the American ship of state. And there are still those working against those efforts; taking all the wrong cues from the wrong people, Boebert will no doubt be among their number. 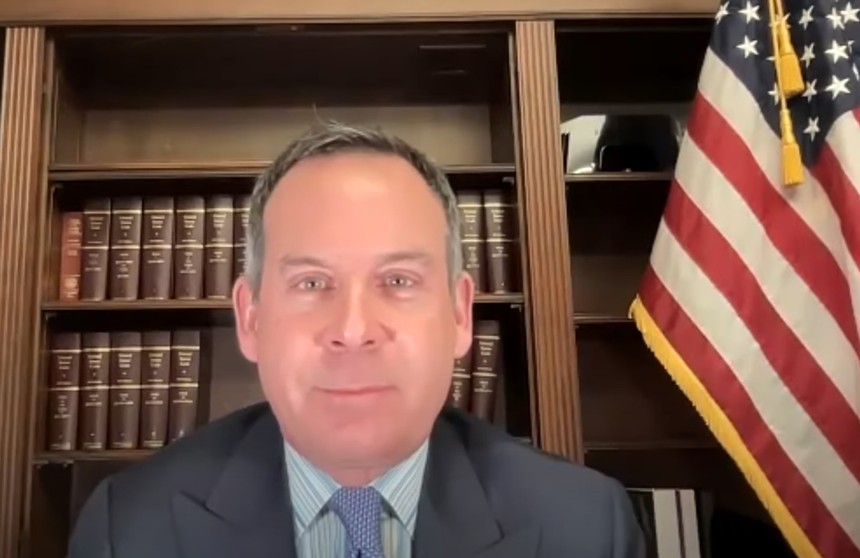 Adam Frisch: missed it by that much.
YouTube
She started back on Twitter right after Frisch's concession. She took a meaningless and mean-spirited swipe at Jen Psaki and her dad. She disrespected Speaker Nancy Pelosi, saying “good riddance” to a champion of women in congressional leadership. And then there was the usual crap: putting gun-violence poster boy Kyle Rittenhouse on the 2nd Amendment pedestal and boosting Jim “I smell like wrestling mats” Jordan’s eye-rolling announcement of the resurrection of the Hunter Biden Republican snipe hunt. That's the GOP’s tactic now: When someone knocks you off that dead horse, you get right back on and keep beating it so loudly that your constituency can’t hear anything else.

What lessons should Lauren Boebert have learned from her near-defeat in her very red district? Maybe that you can’t fool enough of the people enough of the time. That even her own supporters largely support the separation of Church and State. That her ignorance and divisiveness aren’t playing well anymore. That if she wants to stop being lumped in with Marjorie Taylor Greene, she should stop acting like Marjorie Taylor Greene. That the Second Amendment isn’t a platform — it’s a plank, and one that’s splintering as the gun-related body count of our nation’s youth tragically climbs ever higher. That Twitter is not a substitute for actual leadership, and that any victory supposedly earned by talking shit about your opponents is as hollow as peaking in high school. That Trump is no longer a star, let alone one to which even the most Machiavellian enterprise should hitch its ugly orange hate-wagon.

If Lauren Boebert has proved nothing in the last few years, it’s that learning is not her strong suit. But maybe she will surprise us. Maybe we'll have less reason for pieces like this over time. Maybe Boebert will choose to represent Colorado in honest ways that don’t just aggrandize and profit her personally.

If not, Colorado’s 3rd has a chance to learn something, too: how to correct the compounded mistake of Lauren Boebert in 2024.
KEEP WESTWORD FREE... Since we started Westword, it has been defined as the free, independent voice of Denver, and we'd like to keep it that way. With local media under siege, it's more important than ever for us to rally support behind funding our local journalism. You can help by participating in our "I Support" program, allowing us to keep offering readers access to our incisive coverage of local news, food and culture with no paywalls.
Make a one-time donation today for as little as $1.