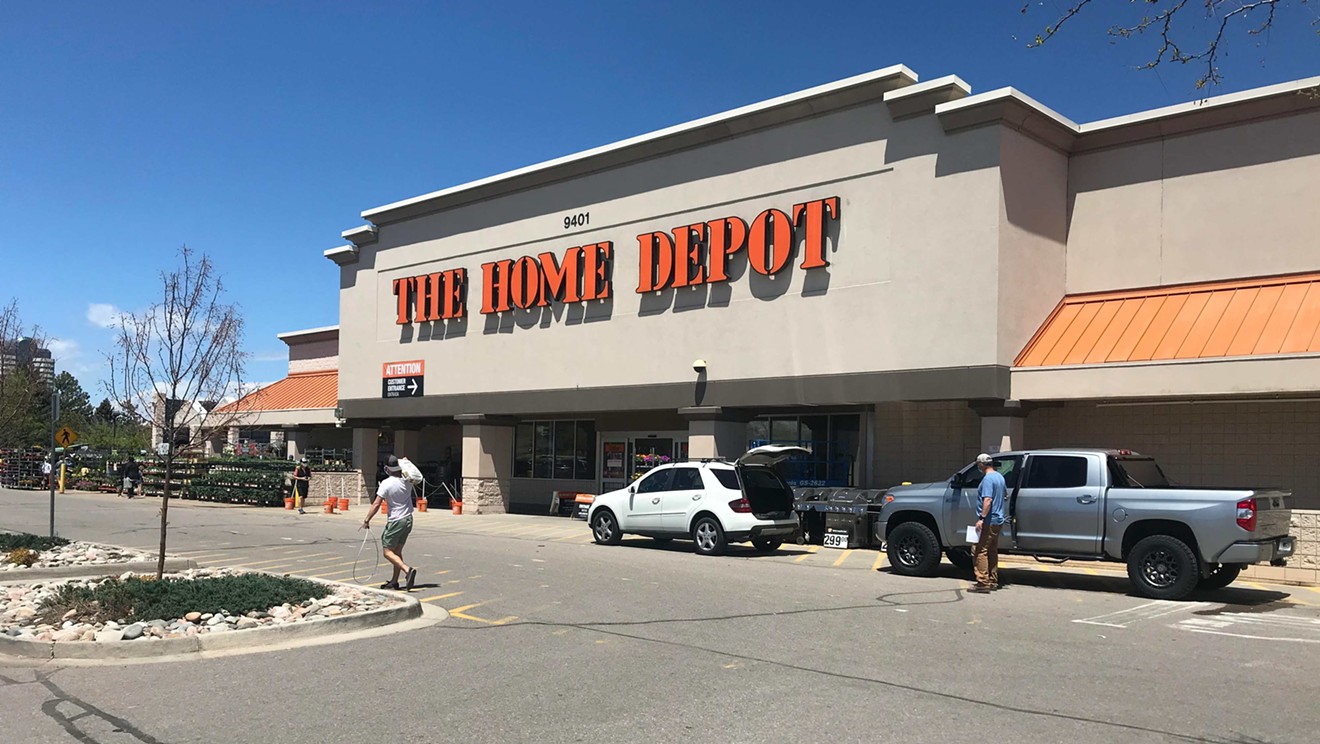 The Home Depot at 9401 East Arapahoe Road in Greenwood Village. Photo by Michael Roberts
While COVID-19 has had an enormous negative impact on untold thousands of retail outlets across the country, a few businesses are actually thriving — among them Home Depot stores, which have become favorite stops for those who've embarked on projects they'd been putting off before staying at home. As a result, the outlets have become test cases for whether social distancing and mask recommendations will be followed as the broader economy reopens — and based on our recent visits to Home Depot locations across metro Denver, the signals are decidedly mixed.

The good news: Most Home Depot customers we've seen are currently wearing face coverings and at least intermittently trying to leave gaps of six feet or more between themselves and others. But a considerable percentage of patrons — mostly men who seem to have permanently aggrieved expressions on their faces  — reject the need for such safety measures and tend to aggressively violate them in ways that suggest they're hoping to be called out so that they can declare every mask-wearer a freedom-hating idiot.

Many Home Depot employees also seem to regularly ignore social distancing. As a result, customers trying to follow health officials' advice will find themselves having to zig and zag around the store in order to avoid coming into closer-than-they'd-like contact with the Defiant Ones. Call the resulting dance the Home Depot Shuffle.

Our most recent visit to a Home Depot took place on Saturday, May 16, at the Greenwood Village branch, 9401 East Arapahoe Road. We stopped by after hearing from a source that the store wasn't properly limiting capacity, unlike at other Home Depots we've visited, where customers are required to line up and gain admittance on a one-out, one-in basis when business is brisk.

But in fact, this store, too, was observing the proper protocol. Granted, there was no line when we arrived just shy of noon, but employees at the designated entrance and exit were monitoring handheld devices, presumably to make sure that the number of people inside stayed beneath a certain threshold.

The store also had signs out front stating that mask use was required for anyone entering, and approximately 80 percent of patrons were following this rule — a much higher rate than a month ago, when compliance was closer to fifty-fifty at the Home Depots we visited. But we saw more than thirty unmasked men, varying in age between young twenties and sixty-plus, as well as three women (one of whom was with her mask-free husband and son, implying that they'd made a family decision).

The store is huge, and while the number of customers allowed inside should have made social distancing easy, the majority of the mask-free shoppers didn't pay the slightest heed to those recommendations. If they wanted an item near where someone else was standing, they'd go straight there rather than waiting for the other person to move on, forcing the original occupant of the spot to either deal with this space invasion or step away and linger until the dudes were finished. We also witnessed groups of men standing and talking in the middle of walkways meant to be used for moving from one side of the store to the other, essentially shutting off access for the rest of the customers. The latter either had to take a detour down another aisle or pass within a few inches of these human honey badgers.

As for Home Depot employees, those assigned to answer questions around the store, as opposed to working at a specific counter, tended to stand within a foot or two of customers instead of maintaining a greater physical distance, and while all of the ones we saw had masks, several wore them over their mouth but below their nose, thereby half defeating the purpose.

If everyone at the Home Depot had taken social distancing and mask use seriously on this particular day, the Greenwood Village store would have met the safety standards set by Colorado experts. Too bad there were so many actions in need of repair.
KEEP WESTWORD FREE... Since we started Westword, it has been defined as the free, independent voice of Denver, and we'd like to keep it that way. With local media under siege, it's more important than ever for us to rally support behind funding our local journalism. You can help by participating in our "I Support" program, allowing us to keep offering readers access to our incisive coverage of local news, food and culture with no paywalls.
Make a one-time donation today for as little as $1.