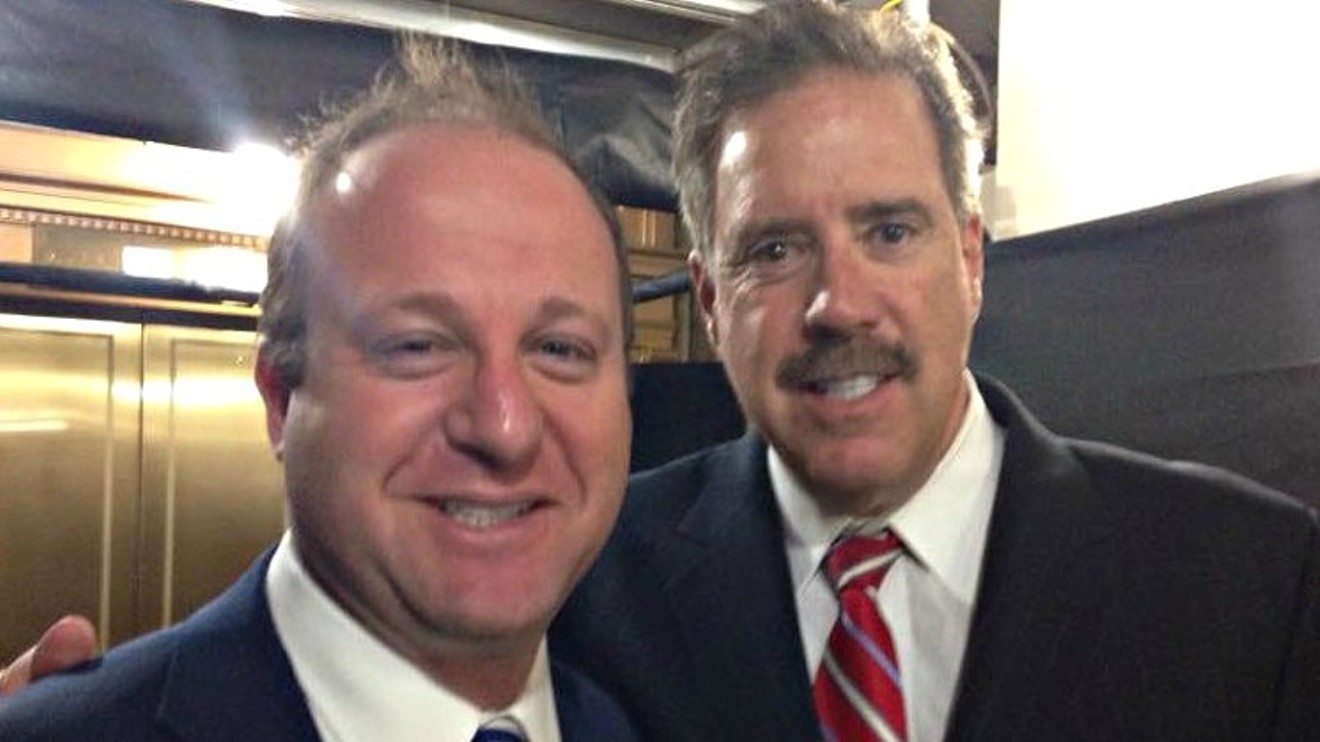 Attorney Craig Silverman posing with Governor Jared Polis. Courtesy of Craig Silverman
Attorney and radio personality Craig Silverman's experience helping pilot Andrew Collins handle the negative publicity sparked by his September 2018 arrest for allegedly dancing naked in his Denver International Airport hotel room where people in the terminal could see him definitely paid off when he found himself in the spotlight's glare.

On November 16, 2019, mere days after Denver confirmed its $300,000 settlement with Collins, who claimed his constitutional rights had been violated, Silverman himself was transformed into a topic of political debate in America and abroad after being cut off during his weekly Saturday morning radio program on conservative talk-radio station KNUS while calling for the impeachment of President Donald Trump.

Early stories by the Denver Post, the New York Times, Time magazine and others all portrayed the situation in ideological terms until KNUS management spoke up to say the real problem was Silverman's appearance alongside former radio partner Dan Caplis on a rival station, KHOW —  to discuss the Collins settlement, it turns out. Whispers that Silverman was about to jump ship and re-team with Caplis soon turned into roars — and in a conversation with Westword, Silverman confirmed that management had told him that if he guested with Caplis again, he'd be pink-slipped even though his KNUS contract was non-exclusive.

"I don't know what would have happened if I was a top supporter of Donald Trump and I did other media — if the attitude would have been the same," he told us at the time. "But what I can tell you is, I don't know why I was taken off the air. I know what I was saying during that segment. I know that they cut my mic. And that's what I told reporters. But you won't find any cut from me saying I know they did this to squelch Trump impeachment-inquiry talk. I've never said that."

Despite the controversy, KNUS supervisors informed Silverman that he'd be able to host his show the next Saturday, November 23 — but things changed after word got out that the broadcast's theme would be impeachment again. On November 21, Silverman revealed via Twitter that he was no longer welcome on KNUS airwaves. He also claimed that the station had wimped out "as bullies often do" because of an allergy to "#TrumpTruth."

Since then, a regular team-up with Caplis on KHOW has failed to materialize, but Silverman landed a gig writing for the Colorado Sun, where he frequently treats Trump like a speed bag. "I'm happy to be a columnist-at-large," he notes. "That gives me a lot of fulfillment."

Silverman has also left his previous law firm to join the team at Springer & Steinberg, P.C., a legal powerhouse with a high profile thanks in part to partner Harvey Steinberg, the go-to attorney whenever a member of the Denver Broncos gets into trouble. Signing up with this squad was a no-brainer, Silverman maintains, because "I had a chance to join the best law firm in Denver. It was an incredible opportunity."

As for the sequence of events that led to his KNUS ouster, Silverman says, "I'm going to speak about that topic at the right time, in the right way. But I have a lot of thoughts on the subject."

Spoken like a man who knows a little something about media frenzies.
KEEP WESTWORD FREE... Since we started Westword, it has been defined as the free, independent voice of Denver, and we'd like to keep it that way. With local media under siege, it's more important than ever for us to rally support behind funding our local journalism. You can help by participating in our "I Support" program, allowing us to keep offering readers access to our incisive coverage of local news, food and culture with no paywalls.
Make a one-time donation today for as little as $1.