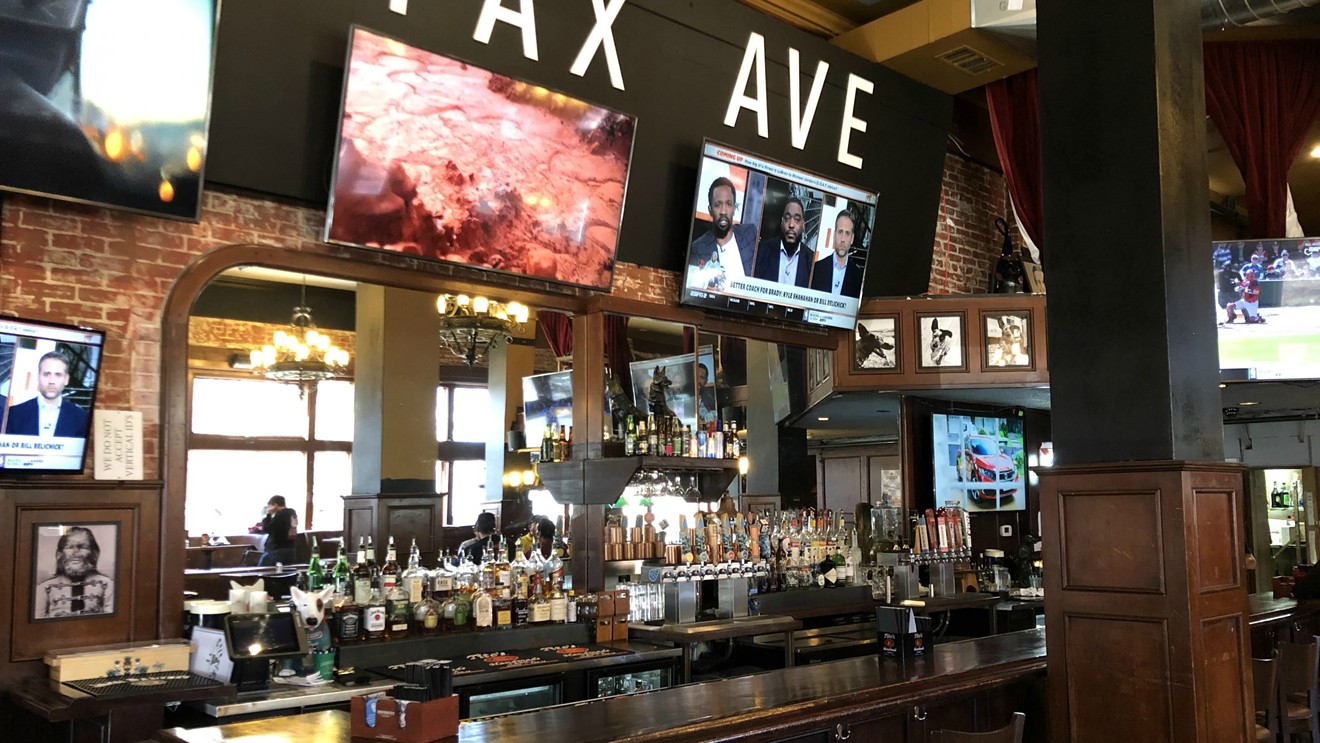 Inside DNVR, a new sports bar set to debut on Friday. Courtesy of DNVR
When Brandon Spano was getting started as a sports journalist just over a decade ago, he scored a gig as a featured columnist for a fledgling website called Bleacher Report — which sounds more impressive today than it was back then. "I think featured columnists were paid, like, a T-shirt," he recalls. "It was not special."

Oh, how times have changed. Today, Spano is the CEO and co-founder of DNVR, a digital sports network that's grown from its humble beginnings as BSN Denver, as it was called when we named it Best Sports Podcast in our 2018 Best of Denver issue, to a sprawling enterprise that, among other things, sells T-shirts — lots of them — at its online store, DNVR Locker.

Now, however, Spano and his crew are moving from the virtual to the literal. At 5:30 p.m. on Friday, March 13, they're scheduled to be on hand for the grand opening of the brick-and-mortar DNVR, a sports bar at 2239 East Colfax Avenue, previously Colfax Sports & Brew's home. But the new venture is far more than a mere watering hole. It will also include a studio, where patrons will be able to watch and listen as podcasts are recorded, in addition to a storefront loaded with DNVR merchandise and enough space for giant watch parties of the sort the network has been hosting for hard-core devotees of local teams such as the Broncos, Nuggets and Avalanche at the Blake Street Tavern and other venues around the metro area.

Can the concept be likened to a homegrown version of ESPN Zone? "Ours will be a little different, but not totally different," Spano acknowledges. "We call DNVR a lifestyle company, and we're all about the three C's: culture, community and content. And content is important, but it's not more important than culture and community. Those are the first two — and the bar is going to be the flagship for culture and community."

He adds: "People still want to go out, still want to watch their teams, still want to hang out. And since 80 percent of the market can't watch the Nuggets and the Avalanche because they don't have DIRECTV" — a reference to the continuing standoff between Altitude Sports, Comcast and DISH — "this is a great opportunity for us." 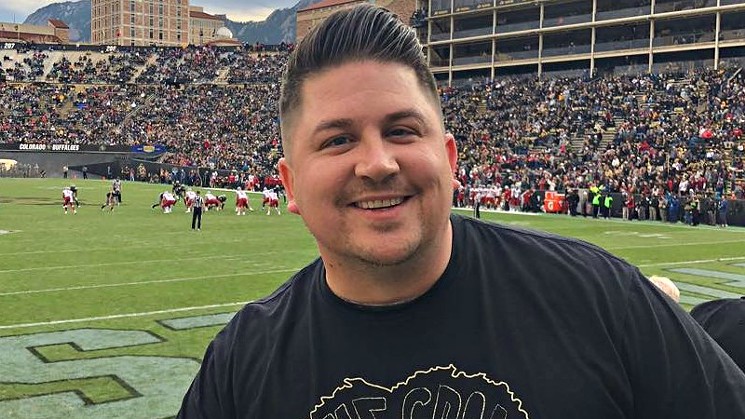 Brandon Spano at a CU Buffs game.
Courtesy of Brandon Spano
As these raps suggest, Spano is as much an entrepreneur as a sports junkie, and that quality has helped him become his own boss rather than remaining at the mercy of TV and radio types struggling to maintain profitable revenue levels amid the ongoing difficulties faced by traditional broadcasters in Denver and beyond.

The Bleacher Report gig led to Spano getting into "brokered radio, where you buy your airtime and you sell the advertising. You have what's called your inventory in between the commercial breaks, and whatever you sell over that is yours," he explains.

His first venture into this territory was a nighttime show at Mile High Sports Radio, and he didn't strike it rich immediately. "It was challenging," he acknowledges. "I was pretty poor for years trying to do it. But I eventually figured it out. I created a system to do it, and I was able to move up to the daytime. I did the afternoon show, and then I eventually did the morning show, nine to noon, after Peter Burns got a job at ESPN."

He was still on the air at Mile High Sports Radio in late 2014, when "I had this big life change," he recalls. "I got divorced, got a little apartment for me and my kids, and started a company, a little LLC called BSN Denver, for Brandon Spano Network, because my show was called The Brandon Spano Show. And I started buying other spots. I had a weekend inventory on [104.3] The Fan, I had inventory at the Denver Post, which had a morning video show that Peter Burns was hosting with Mark Kiszla and Brandon Krisztal and some other guys, and I started BSNDenver.com, which was a very small blog site with no writers. Then, early the next year, I found a guy who was willing to trade some radio and web inventory for 300 feet of office space right across from Union Station, and we moved in — me and Adam Kinney, who was just getting out of radio and became my go-to guy. We were kind of a little agency."

The new business soon faced a major challenge: In March 2015, Mile High Sports Radio went off the air. The station planned to return in a month or so, but rather than waiting, Spano shook up BSN Denver. "I looked at how SBNation had all these fan-driven sites, like Purple Row, that were team-specific and really dominated SEO [search-engine optimization], because Google ranked them as category leaders for the Rockies or the Broncos or whoever. They had big communities on social media, too, and I thought, 'This is the future. We need a company that has team-specific communities, but that are managed by real journalists who cover the teams.' So we went out and found writers for every team — all guys just out of college, and a couple still in journalism school, some of whom were writing for local blogs. And by that April 20, we launched our new format." 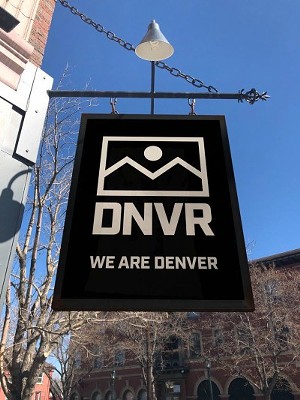 The new DNVR sign.
Courtesy of DNVR
The net ramped up steadily. Soon, podcasts that had been shared two or three times a week became daily, and by mid-2017, the listenership numbers were so strong that Spano took out a Small Business Administration loan that allowed BSN Denver to move into larger offices in Lakewood and purchase higher-quality mobile podcasting equipment. Then, later that year, he birthed "a subscription product," he recalls. "Essentially, we put a paywall on our site, and right out of the gate, we turned a couple thousand of those readers into subscribers." In the coming years, the business added merch and threw watch parties that have gotten progressively larger; a recent Nuggets bash attracted nearly 300 people.

This past September, BSN Denver was rebranded as DNVR. Spano says he now has twenty full-time, salaried employees, including Broncos expert and DNVR co-founder Ryan Koenigsberg, Avs insider AJ Haefele and twelve other credentialed journalists who frequently travel with the teams they cover.

DNVR the bar, which will operate under a licensing agreement with Little Pub Company, is the next step. "We're going to have a podcast studio upstairs," Spano says. "There's a glass wall from floor to ceiling on the second level, so customers can see people doing videos and podcasts, and the sound will be piped through the speakers so they can listen live. Breckenridge Brewery is a big partner of ours, so all the Breck Brews are going to be there. You can buy a membership there, and there'll be a members-only menu and some members-only events. So this one building will encapsulate all the things we do."

DNVR's potential audience is "massive," Spano says. "Our podcast network delivered almost 400,000 downloads last month. And between our team accounts and our talent, we've got about a quarter-million followers on social media. So we reach a lot of people. There's a lot of marketing power there. We're an alternative digital media company that's tackling sports, but we don't stop there — and with the bar, we're doubling down. This is the first frontier."
KEEP WESTWORD FREE... Since we started Westword, it has been defined as the free, independent voice of Denver, and we'd like to keep it that way. With local media under siege, it's more important than ever for us to rally support behind funding our local journalism. You can help by participating in our "I Support" program, allowing us to keep offering readers access to our incisive coverage of local news, food and culture with no paywalls.
Make a one-time donation today for as little as $1.