"Not many people know that we have furries in Colorado schools. Have you heard about this, Jimmy?" Ganahl asked during her September 24 interview with KNUS host Jimmy Sengenberger. "Yeah, kids identifying as cats. It sounds absolutely ridiculous, but it's happening all over Colorado, and schools are tolerating it. It's insane! What on earth are we doing? Knock it off. Schools, put your foot down. Like, stop it. Let's get back to teaching basics and not allow this woke ideological stuff to infiltrate our schools. And it is happening here in Colorado. It's why I moved from Boulder Valley to Douglas County, because it was happening in my kids' schools four years ago."

Heidi Beedle of the Colorado Times Recorder was the first to report on this exchange, and KRDO reporter Spencer Soicher subsequently followed up, asking Ganahl where schools were having issues with kids identifying as furries.

"Well, I'm out on the campaign trail talking to parents every day, and this is this really weird phenomenon that's happening in middle schools and high schools. It's actually been going on for a couple of years. It's called furries. And kids, they've gone through a really tough time and they're struggling. So I have a lot of compassion for kids that are having difficulty right now, but schools tolerating kids dressing up as cats is not appropriate," Ganahl said, adding that she's seen "many, many" examples of this happening.

Ganahl stands by those remarks, and offers a list of schools that have reported problems with kids in costumes; one even banned dog collars. "As a candidate for governor, but more than anything as a parent, my concern is that distractions like children dressing up in costumes at school detract from the reality that 60 percent of our kids are not performing at grade level. It’s tragic that we are failing our children. We need to make them our priority," she tells Westword, saying that she will be "a voice for the parents."

And who will speak for the furries?

Furries are "people who have an interest in anthropomorphism, which, when applied to the furry fandom specifically, refers to giving human characteristics to animals," says Sharon Roberts, an associate professor of social development studies at Renison University College and the University of Waterloo in Ontario. She's also the executive director of the International Anthropomorphic Research Project, aka Furscience, a group of professors who've studied 40,000 furries from seventy countries and published more than fifty peer-reviewed articles and book chapters on furries and similar fandoms, like anime fans.

"At its core, the furry fandom is defined by its anthropomorphic media (artists, musicians, music, etc.), friendship and a strong sense of inclusive community. Like people who attend Comic Con and cosplay as their favorite character, most furries (95 percent) create their own unique, avatar-like representations of self. These characters — called fursona — are typically imbued with positive characteristics," Roberts says, noting that "while furries enjoy anthropomorphic expressions of self, they do not generally identify as animals." 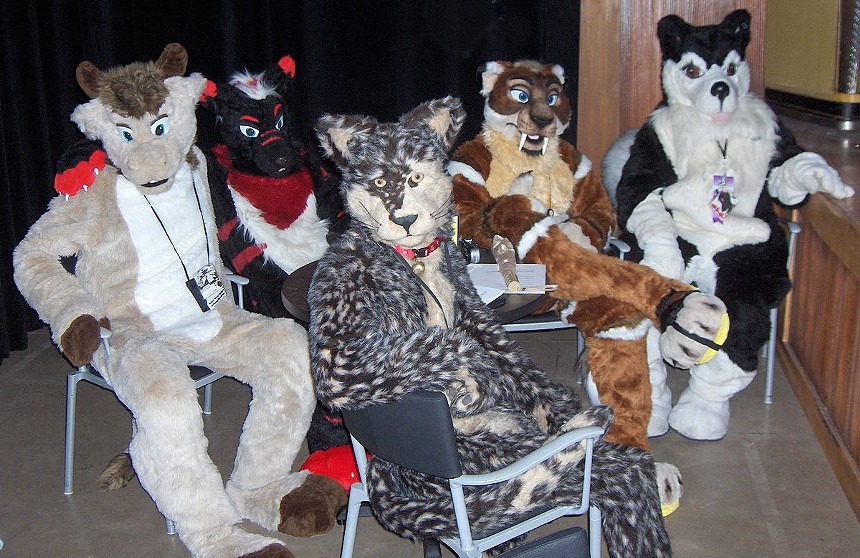 Furries are in the spotlight in Colorado.
Wikimedia Commons
The furries-in-schools scare is not unique to Colorado. Over the last year, controversies have erupted in school districts across the country as conservative parents and public figures claim that schools are establishing formal protocols to cater to students dressing up and attending class as furries. These reports — as well as spinoffs about staffers placing litter boxes in bathrooms so that furries can relieve themselves — have been shown to be false. But the rumors continue to pop up across America, like a cat with nine lives.

"Furries — like so many others who have hobbies — engage in limited fantasy," says Roberts. "For example, someone who goes to a Star Trek convention and cosplays as Captain Kirk is unlikely to show up for work on Monday and demand that their phone be replaced with a Star Fleet Communicator and their supervisor beam them over to building B. Similarly, furries might attend a furry convention — and no, there aren’t litter boxes at conventions — or local meet-ups, or simply connect with like-others online, but they return to everyday life on Monday, just like everyone else. Is it possible that somewhere someone has asked for a litter box? Like asking for a Star Fleet Communicator to be used at work, I suppose that anything is possible. But is it an integral part of the furry fandom? Not according to the data."

And not according to metro Denver school districts.

"This is a non-issue in Cherry Creek Schools," says Abbe Smith, a spokesperson for the Cherry Creek School District. "It is not true that we have tons of students coming to school in full animal costumes. Do we have kids who sometimes wear cat ears or a T-shirt with cats on it? Probably. But this is not an issue we are concerned about."

Adds spokesperson Corey Christiansen, "We are not aware of any instances of this in Aurora Public Schools."

And according to a Jefferson County Public Schools spokesperson, "Jeffco Public Schools has district policy around appropriate dress code. If clothing is disruptive, district policy gives the principal power to place restrictions on it. This would include students dressing in costume. We do not have litter boxes in schools."

As for Ganahl's claim that there's a furry problem in the Boulder Valley School District, BVSD spokesperson Randy Barber responds: "The concerns being generated by the Republican gubernatorial candidate about the Boulder Valley School District are without merit. There haven't been any reported issues in our district related to students wearing cat costumes or any other costumes, and there are no litter boxes inside of our buildings. Students are permitted to wear whatever they would like, as long as it abides by board policy."

In Denver Public Schools, "there are a few students who dress with animal ears and a tail," according to Scott Pribble, a DPS spokesperson. "But we have not had any issues with these students," he adds. And DPS does not set up litter boxes for students.

Ganahl's office provided a list of schools that had received furry-related complaints, and noted that Castle Rock High School had even banned dog collars. But that's simply not true, according to the Douglas County School District.

“It’s disappointing that our opponent is focusing her time on conspiracy theories and shaming Colorado kids," says Amber Miller, speaking for the Polis campaign. "It just goes to show you how extreme and out of touch she really is. Meanwhile, Governor Polis is focused on empowering parents and helping kids get a great education in Colorado, starting with high-quality preschool and kindergarten, improving access to career skills in high school, and reducing the costs of higher education.”

And Ganahl isn't the only Colorado politico displaying animal attraction. Congresswoman Lauren Boebert, the Western Slope Republican, has also started claiming that Durango schools are putting out litter boxes for students who identify as furries.

"Heidi Ganahl's claims are as outlandish as they are disingenuous," says Gillian Ford, communications director at One Colorado. "While Colorado voters are facing inflation, cost-of-living increases and are concerned with access to reproductive health care, Ganahl is perpetuating baseless tropes founded in anti-trans beliefs. And to what end? Demeaning Colorado's children, disparaging educators and distracting from the issues that matter."

For Roberts, the most important aspects of the furry community are the meaningful friendships and "deep identity work done in developing a fursona," and how all of this can translate to furries' everyday lives.

"The furry fandom is typically a safe place — sometimes the only safe place — for people of all genders and sexual orientations to be accepted by peers who celebrate their best, most authentic selves," she says. "It is a shame that the furry community still endures (some) negative media portrayals and public misperceptions as deviants, because the truth of this remarkable and resilient community is far more interesting."

This story has been updated to include a quote from Jared Polis's campaign, and the response from Douglas County regarding dog collars.
KEEP WESTWORD FREE... Since we started Westword, it has been defined as the free, independent voice of Denver, and we'd like to keep it that way. With local media under siege, it's more important than ever for us to rally support behind funding our local journalism. You can help by participating in our "I Support" program, allowing us to keep offering readers access to our incisive coverage of local news, food and culture with no paywalls.
Make a one-time donation today for as little as $1.