Representative Lauren Boebert: maskless, smug and armed. YouTube
Well, that didn’t take long. Representative Lauren Boebert might be new to her job in Congress, but she’s wasted no time in raising her profile in Washington, D.C., through self-promotion. This is a trick that paid off well during her campaign for Colorado's 3rd Congressional District seat, and the strategy is simple:

Create a crisis out of nothing (I’m gonna carry my gun anywhere I want like that there Constitution says I can!), pretend offense when you’re rightly opposed (there are laws about where and how firearms can be carried, Representative Boebert), and then bitch on Twitter about it — as in the video below. Then link said video to your fundraising website, and wow: Running a half-assed diner that got attention after its gun-toting owner raised a Second Amendment ruckus sure seems like small fried potatoes now.

Boebert’s video is hampered by one flaw that's shared with the Twitterings of role model Donald Trump: It's not particularly accurate. But the Americans at which this video is aimed won’t care; they’ve been trained to ignore such details well over the last four years of an increasingly shameless GOP, not to mention forty-odd years of talk radio.

As for the rest of us? Here are ten of the worst things about Boebert’s latest cry for attention:


The Conceit
Not Boebert’s conceit, though that’s evident, too. The conceit of the video itself, which begins as a poorly staged pretend campaign ad, for some reason. Maybe as a reminder that a new representative's re-election campaign begins on the day she's sworn in — which is terrifying enough for most Coloradans. But it also reminds us that Boebert always has a gun within reach, even if it’s not in-frame, and she’s going to lock and load just to prove that she’s as serious as a ’70s cop show. That’s the entire point of the piece, of course, but still, if your political platform consists entirely of “I have a gun,” then your constituents have a serious reason to worry.

The Strut. The Smirk
Well, those qualities, as well as firearms and far-right rage, got her elected...so work what you got?

Boebert Quoting Herself
Just in case the media won’t do it, Boebert is going to make sure you know everything she says, in big letters that look like they belong on old "Wanted" posters following her all over the streets of D.C., where she’s apparently wandering aimlessly in an unintended metaphor for her future plans for actual congressional work.

That Font
It’s the Old West, pardner! It’s High Noon in Washington! Them tinhorn Easterners don’t stand a chance against our rugged, shoot-from-the-hip style from out here in Coloraddy!

Misplaced Commas
“DC is one of the Top 10, most dangerous cities in our country,” the video says in its accompanying closed captioning, apparently for those gun nuts with hearing loss due to…well, guns. No money for editing services, Representative Boebert? Maybe after the fundraising from this video. 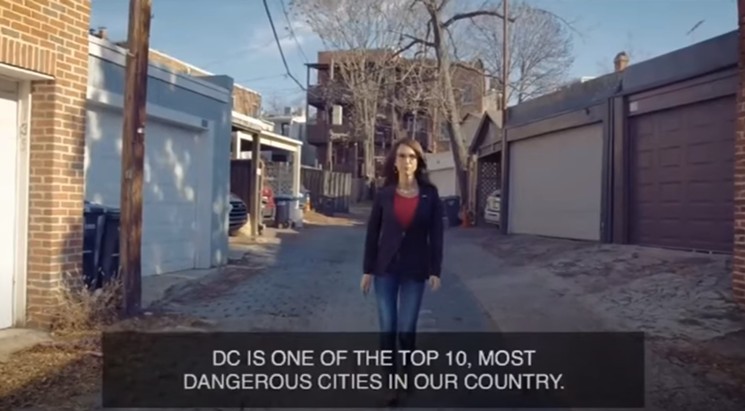 YouTube
Washington D.C.: Crime Alley
The video makes much out of our nation’s capital being a place where “homicide rates and violent crimes are skyrocketing.” And then it shows her walking one of those super-dangerous alleys behind multimillion-dollar brownstones with Teslas and Maseratis in the garages and high-end sushi places and wine bars on the corners. There are parts of D.C. with real crime, no question. There's also no question that Boebert will be walking in — or caring about — any of them.

“Being a member of Congress is pretty basic…”
Sigh. It shouldn’t be.

Telling the Same Lie Over and Over Doesn’t Make It True
For the uninitiated: Lauren Boebert’s embrace of gun ownership at her restaurant was not the result of a “violent incident” outside her business. This is the fiction she’s told for some time to promote first Shooters Grill and now her political career — Boebert's on record telling the Durango Herald that someone was beaten to death in her back alley — but there’s utterly no proof of this ever happening. Like most of Boebert’s shtick, the open-carry concept of her restaurant was born from the same want as we now see in her political career: revenue.

“Educated, Law-Abiding Gun-Owners are the safest people to be around.”
This statement is true on its face, but just as true (if not more so) if you take out “gun-owners.” Who are safe to be around? The educated and law-abiding.

“You’re Safe with Me.”
Unless you’re unnerved by the combination of ignorance, pride and gunpowder, in which case you might not want to say "Hi."
KEEP WESTWORD FREE... Since we started Westword, it has been defined as the free, independent voice of Denver, and we'd like to keep it that way. With local media under siege, it's more important than ever for us to rally support behind funding our local journalism. You can help by participating in our "I Support" program, allowing us to keep offering readers access to our incisive coverage of local news, food and culture with no paywalls.
Make a one-time donation today for as little as $1.