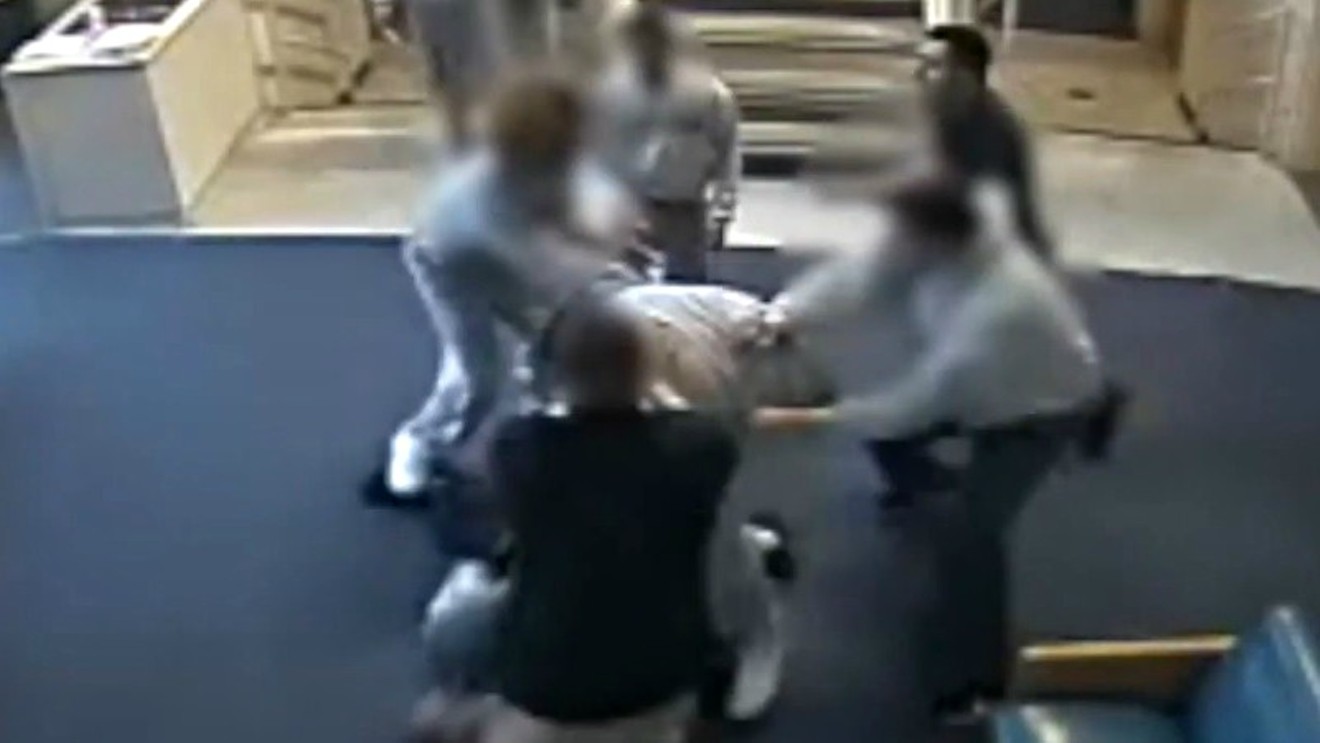 Footage of a May 1 riot at Lookout Mountain Youth Services Center. The image has been blurred to protect the identity of the inmates. Courtesy of Fox31
A former teen inmate has horror stories to share about Lookout Mountain Youth Services Center, recently the site of a riot in which four inmates and ten staff members were injured; days later, two sex offenders escaped the troubled facility.

The ex-inmate, whom we'll refer to by the pseudonym Bill, spent nearly five months at the institution last year, when he was just fourteen. During that time, he says, assaults and other violent disruptions were frequent, drugs and sex were far from uncommon, and the system always seemed on the brink of total collapse.

Anders Jacobson, executive director for the Colorado Division of Youth Services, only speaks generally about Lookout Mountain YSC in order to protect the privacy of inmates past, present and future. But he doesn't sugarcoat the situation, and makes it clear that changes have already been made.

"I put in place a new interim director to take the lead over that youth center," Jacobson says, "and we have accepted the resignation of the previous director. I also took what is the simply unprecedented measure of reducing the census at Lookout Mountain by approximately a third of its population — 53 youths. We clearly believe that we needed to go in a new direction."

The State of Colorado's LMYSC web page describes the facility as "an intensive secure treatment program for 140 male juvenile offenders" that uses "cognitive behavioral and social learning modalities" designed to provide "an environment where therapeutic and strength-based relationships may develop."

These ideals aren't always achieved. Back in 2010, Westword shared a U.S. Justice Department report about sexual abuse in juvenile facilities, and the stats from Lookout Mountain were the worst in Colorado: 12 percent of youth reported being sexually assaulted, well above the national average. High-profile escapes have been a part of the Lookout Mountain story for years, too, as exemplified by Zachary Oliver, who chalked up 243 violations at the center prior to August 2014, when he fled after brutally beating an elderly guard with a pillowcase filled with rocks.

Outside the Lookout Mountain Youth Services Center.
CBS4 file photo
More recently, on April 11, Golden police revealed the escape of fifteen-year-old Lookout Mountain inmate Devon Brock, who was considered to be a violent offender. Brock was taken into custody in Littleton on April 12 — but that same day, the center was reportedly placed on lockdown because of a tip involving threats against five guards. Information suggested that inmates might have managed to sneak a weapon into the institution; while a subsequent search failed to uncover any guns or knives, a homemade shank was found. Afterward, two inmates were transferred to another facility.

Two weeks later, on April 26, Lookout Mountain made more ugly headlines when Joseph Forrest, a 49-year-old staff member, was placed under arrest by the Lakewood Police Department for suspected sexual exploitation of a child. The LPD pointed out that the charge involved "possession of several images of child pornography."

That was followed by the aforementioned riot, which got under way around 6 p.m. on May 1. Then, at 5:20 a.m. on May 6, inmates Javier Madera, nineteen, and Emilio Dominguez, seventeen, were discovered missing, and they remained at large for more than 24 hours before being captured by members of a fugitive unit associated with the Denver Police Department and the Rocky Mountain Safe Streets Task Force following a crash in the vicinity of Interstate 70 and U.S. 40.

Bill was no longer at Lookout Mountain when the most recent incidents occurred; he was released late last summer. But given his personal experiences, none of the episodes surprise him.

According to Bill, he got into trouble with authorities over what he describes as "some minor harassment and menacing charges — just for having an aggressive tone toward someone in the neighborhood." But the combination of these offenses with a marijuana-possession beef was enough to get him placed in Lakewood's Mount View Youth Services Center before being transferred to Lookout Mountain.

The move frightened him. "I was young — I'd just turned fourteen — and I'd heard there were a lot of sexual assaults there," he recalls. "And to be put in with another 150 individuals I wasn't familiar with, I was really skeptical."

Bill didn't become a sexual-assault victim, but he says what appeared to be consensual sex was taking place between staffers and inmates. He also says some staffers would bring in contraband. Most often, the forbidden items were drugs: "They had a real problem with residents smoking marijuana wax in the restrooms," he allows. But he also mentions tools intended to facilitate escapes, including a screwdriver — and one person did indeed get free during his stint, only to be subsequently grabbed and returned.

Around that time, Bill recalls, "one of the residents bit part of a staff's earlobe off. My pod was pretty relaxed because it had the younger kids in it. But the one with the older kids got put on a modified program because people were being aggressive toward staff."

In such scenarios, residents would have to be "physically managed," in the parlance of the facility. When that happened, Bill says it would trigger a "code red" — a step beyond code yellow, which signified a lesser infraction, such as not following staff directives.

Many of the altercations involved resident-on-resident violence triggered by rival gang affiliations, and Bill remembers that "there would usually be at least one code red every day. And there were also a lot of staff assaults. There was one man who had to be removed because he was using a lot of excessive force when he was physically managing kids. There were issues of him harming them in a way that really shouldn't have been happening."

The worst moment for Bill came after "I let my therapist know about something that happened to me during a pat-down," he remembers. "One of the supervisors touched me in the wrong place, and I didn't say it was done in a sexual manner, but I did say it made me uncomfortable. They had to do an investigation, and they made the rest of the unit aware of the situation — and two days after that, my roommate attacked me. Afterward, he said he was blackmailed into doing it by staff. They said they'd tell the administration he was selling drugs and that he had a dirty drug test if he didn't do it, and I believe him. We were really close, and when he told me, he started crying and saying he didn't have a choice." 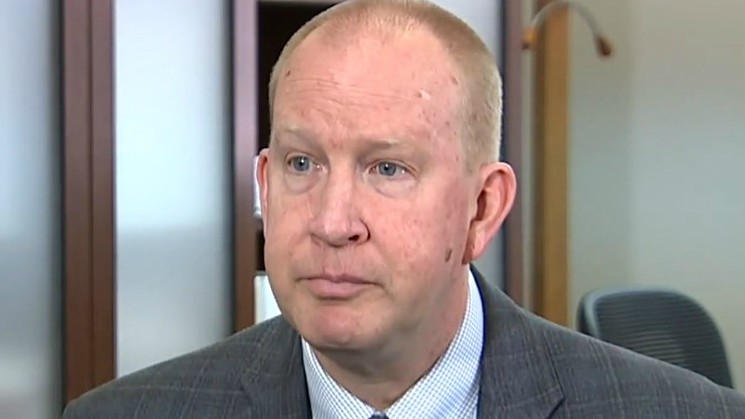 Anders Jacobson is the Division of Youth Services' executive director.
Courtesy of Fox31
While not addressing Bill's specific accusations, executive director Jacobson acknowledges, "The center has struggled over the last year or two with hiring and retaining direct-care staff. The economy's been good in the metro area, so it's been hard to get staff to come in and get them where we need them to be. But with a consistent, well-trained staff, consistent systems and experienced leadership to oversee everything, we should have better programming that's going to equal better safety, security and staff retention, as well as the ability for youth and staff to build positive relationships with each other."

Even with a significant reduction in inmates, Jacobson is under no illusions that all of the problems at Lookout Mountain have been solved. "There are going to be acts of aggression. That's something that will never go away in our business," he says. "Youth we serve across the state who come into the commitment system got there after a long period of time in their lives. The average age is seventeen, and we do serve youth who have aggressive behavior. But our goal is to work with them, help them build skills and generate a vision for the future. And if there is an act of aggression, we'll respond to it as quickly as possible to bring it under control."

As for gang issues, "that's a given, too," he concedes. "We know that, and it's something we're addressing at Lookout Mountain. We have found that some of the programming or systems that were put in place over the last year may have led to more differences among gang-affiliated youth. And in my experience of working with and running youth centers, we need to find ways for mediation, to allow different gangs to interact with each other and provide a safe environment for them to do that. If you allow them to separate and group up on their own, that would not be an advisable way to go."

Additionally, he continues, "we're putting mechanisms in place for youth to watch other youth and employees to watch employees, so problems get reported. There are a handful of anonymous ways for youth to have unfettered access to report things outside the Division of Youth Services. We make that clear; it's posted all over our youth centers, and it's in our resident handbooks. There are outside folks who visit these youth on at least a monthly basis, whether it's a caseworker, a mother, a father or what have you. We do that because we want to know if there's been any kind of incident at a youth center, and if one is reported, full investigations will be completed." "There have certainly been periods over the last decade where everything at Lookout Mountain was running very well, and the center was seen as doing tremendous work with young people because of an abundance of career and technical programming that is available," Jacobson stresses. "The center has also been well known for programs for youth who go into the community under the auspices of restorative community justice." For instance, a crew of residents cleaned up a cemetery in Golden in advance of Memorial Day. Good-news stories like these have been few and far between at Lookout Mountain of late, though, as Jacobson admits: "We feel some of those systems have dissolved over the last year or two, and we want to get back to a place where it can be a national model."

For his part, Bill is currently on probation, but he plans to go back to school in August. In the meantime, he says, "I want to let people know and understand that there's been a lot of problems and corruption at Lookout Mountain. While we're there paying for the consequences of our actions, we should be able to be safe and take part in our treatment so we can rehabilitate ourselves. But with all of the conflicts between staff and residents, that's very difficult."
KEEP WESTWORD FREE... Since we started Westword, it has been defined as the free, independent voice of Denver, and we'd like to keep it that way. With local media under siege, it's more important than ever for us to rally support behind funding our local journalism. You can help by participating in our "I Support" program, allowing us to keep offering readers access to our incisive coverage of local news, food and culture with no paywalls.
Make a one-time donation today for as little as $1.