Jefferson County Facebook
Dr. Mark Johnson, the longtime executive director of Jefferson County Public Health, had announced early this year that he was going to retire in June, right about the time he was slated to receive the American College of Preventive Medicine’s Distinguished Service Award at its annual meeting — but the coronavirus pandemic rearranged that timeline.

Johnson decided to stay on the job until October, and is now certain that he's leaving the county in a relatively healthy situation. "I think things are settling down a bit," Johnson says. "At least we have a bit of a regimen addressing things, and taking good care of the people of Jefferson County."

Six months ago, things were much more unsettled as the county, and the entire country, began coping with the "most politicized pandemic in our history," he recalls. "This is clearly the biggest thing I've had to deal with through my time in the office. I need to highlight the fact that I've done nothing by myself; everything has been accomplished with a group or other workers."

And with the good people of Jefferson County. "I was actually a bit surprised by how well people responded to the closure at first, and how they were staying at home," Johnson says. But that changed as Governor Jared Polis allowed the state to open back up a bit, and people began chafing at restrictions. "From the emails I've gotten, Americans do not like being told no, and they think freedom means they can do anything they want," Johnson points out.

While the pandemic is certainly the biggest thing he's had to deal with during his three decades as head of the health department, other moves Johnson made to improve the state's public health network helped make not just Jefferson County, but Colorado in general, uniquely suited to handle the current crisis.

A global pandemic, for example. "It's amazing to me that now, with COVID-19, people at least understand the concept of public health," Johnson says. "You need to do it on a statewide level. You can't do it just on a county level — people in Boulder County cough on people in Jefferson County."

Dr. Mark Johnson
Jefferson County
One of Johnson's earlier accomplishments was working with a steering committee to get the Colorado School of Public Health started fifteen years ago. "That has increased the level of competence in public health," he points out. "I think we were much better prepared to deal with this because of the School of Public Health."

After writing grant applications to help fund public health programs, he worked on a 2008 bill to require that every county have a public health official, as well as a community health improvement plan. Before that, he says, public health programs were "a real patchwork quilt" across Colorado. And in some places, he recalls, standards were so lax that officials warned, "If you eat at a restaurant in certain counties, we cannot guarantee you'd be safe."

That changed over the years, as Johnson continued pushing for improvements. He helped get the chief medical officer position formalized at the Colorado Department of Public Health and Environment, for times when the executive director was not a physician. And he worked on improving communication between all metro Denver public health departments.

"Although I take no credit for all of that, I have a little piece in all of that," he says. And as it turned out, "good policy, good preparation" helped get Colorado ready for dealing with a pandemic — though no one predicted it was coming.

When he started the job thirty years ago, he did recognize a very specific challenge, though not its scope: the Rocky Flats Nuclear Weapons Plant, which had just been raided in June 1989 by the feds because of alleged environmental crimes at the facility. But while Rocky Flats is in Jefferson County, Johnson was "very quickly disabused" of the idea that he was a player in that scenario, in part because a predecessor, Dr. Carl Johnson, had "stepped on a lot of toes," he says. "The county commissioners were going to do the politics, the state health department does the health."

But Johnson could still speak out, and over the years, he did. "In all of my time here, I have never felt that the board or health commissioners ever tried to muzzle me about Rocky Flats," he says. There was just one time when anyone questioned him, he recalls: when he promised Representative Wes McKinley, the former foreman of the Rocky Flats Grand Jury, that he would testify about his bill calling for signs around Rocky Flats that talked about the history there — including building plutonium triggers for nuclear bombs.

Today most of Rocky Flats is a national wildlife refuge, and the signs at the entrances are nowhere near as instructive as McKinley envisioned. But the history of the plant is still being shared. Part of that is thanks to Kristen Iversen, a onetime Arvada resident who wrote the book Full Body Burden: Growing Up in the Nuclear Shadow of Rocky Flats. Johnson met Iversen during a chat with Senator Michael Bennet about Rocky Flats. "I told her I'd read her book and had talked to book clubs about it," Johnson says. 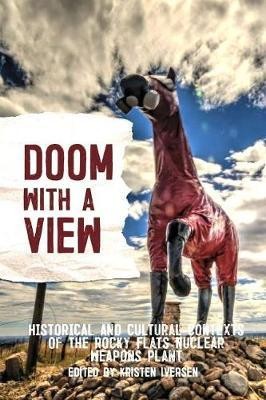 When Iversen decided to put together another book about Rocky Flats, Doom With a View: Historical and Cultural Contexts of the Rocky Flats Nuclear Weapons Plant, she reached out and asked Johnson if he'd write a chapter. (That book comes out this month; read his chapter, "Enemies of the People," here.)

Johnson has never actually stepped foot on Rocky Flats, but he drives by it every day on his way to work. And while he knows the proposed Jefferson Parkway along the east side of the former plant would have made his commute faster, "to me, it's ludicrous, when you look at how you're stirring up dust that everyone knows has plutonium," he says of those plans. "We don't know how much, but everyone knows it's there."

Starting next month, Johnson won't have to make that drive every day. In his retirement, he's planning to do more traveling, do more writing, but since he's been elected president of the Colorado Medical Society, he won't stop thinking about public health.

As Johnson summed it up in accepting his award: “I am honored and humbled by this recognition, as it is not only from an organization to which I have dedicated much of my life, but one in whose tenets I fully believe. I’m thankful for the opportunities I have had to serve the preventive-medicine and public-health communities, and for the mentorship and camaraderie I’ve received from my fellow preventive-medicine professionals.”

Kristen Iversen, Mark Johnson and other contributors to Doom With a View will be part of a Zoom book launch at 6 p.m. Friday, September 4. Register here.