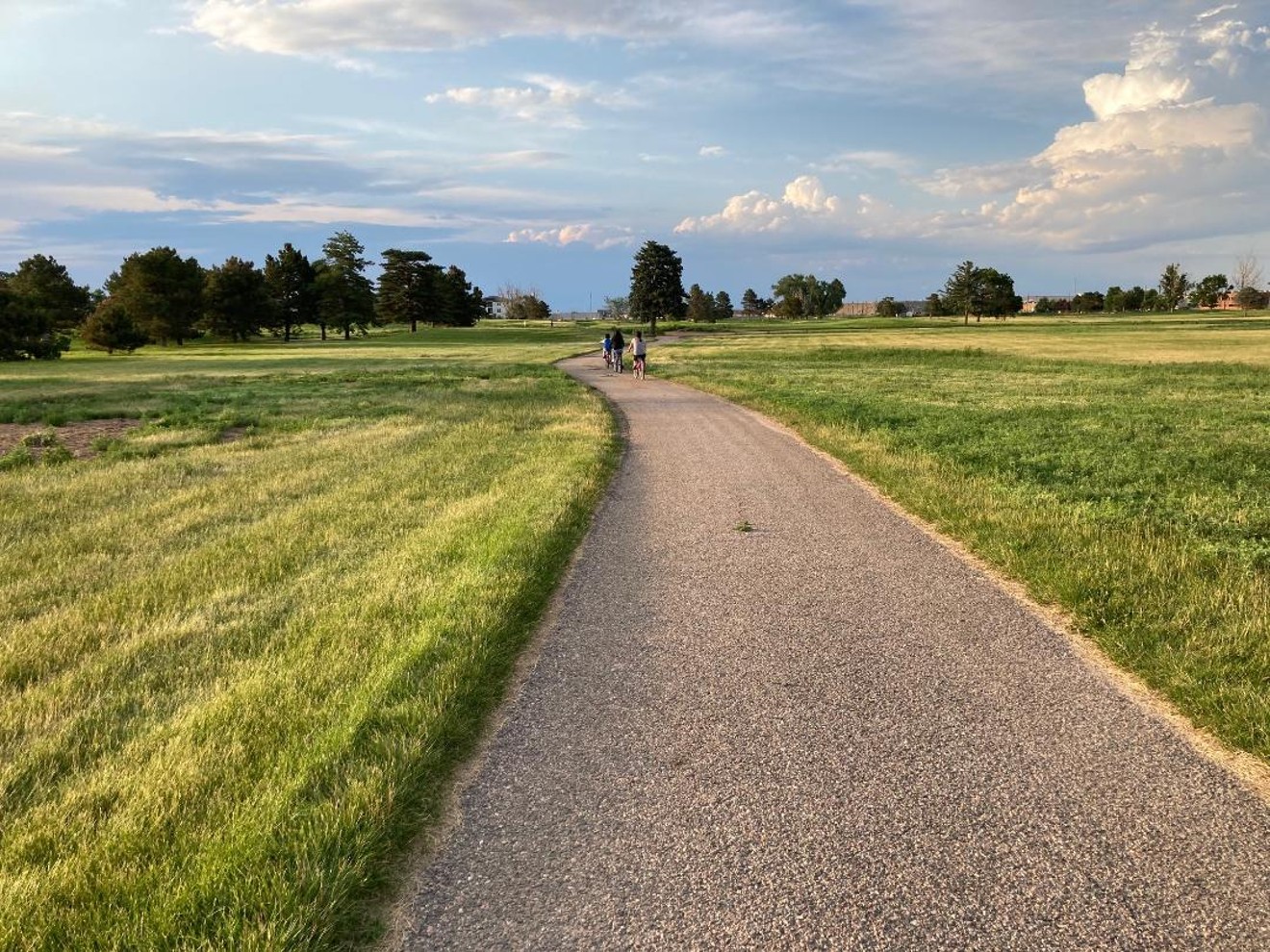 The Park Hill Golf Course could become the fourth-largest regional park in Denver. Amy Harris
With Denver City Council set to consider a Small Area Plan and rezoning request for the 155-acre Park Hill Golf Course, a proposal to lift the conservation easement on the property and allow development could very well be on the municipal ballot next April, when voters will also weigh in on a wide-open mayor's race.

Westside Investment Partners, which bought the defunct golf course from the Clayton Trust for $24 million in 2019, has committed to dedicating at least 100 acres of land from the hotly debated property for publicly accessible parks and open-space purposes. Of those 100 acres, approximately 95 would be turned into a contiguous regional park.

Where would a park of that size rank in Denver's park system?

The City of Denver owns hundreds of different properties that qualify as parks, including the Denver Mountain Parks, which are located in other counties. The largest tracts, such as Genesee Park at 2,407 acres and Daniels Park at 984 acres, are mountain parks. So is Red Rocks Park, at 732 acres.

Denver also has ten regional parks, which are larger parks located within the borders of the City and County of Denver. The largest of these is City Park, which is 314.44 acres and includes the Denver Zoo, the Denver Museum of Nature & Science and the City Park Golf Course. Next up is Sloan's Lake Park, at 284.15 acres. Washington Park comes in third, at 157.48 acres.

If and when voters approve lifting the conservation easement on the Park Hill Golf Course property, they could be approving the eventual creation of the fourth-largest regional park in Denver.

"This is not about parks versus homes. We’re really wanting to emphasize that we can have parks and homes on the site," says Kenneth Ho, the lead developer at Westside working on the Park Hill Golf Course project.

Using a slideshow deck that features the phrase “Parks & Homes” on every slide, Ho describes a future mixed-use development on the golf course property that would include housing — 25 percent of which would be earmarked as affordable — along with a grocery store and other forms of retail on the west side of the land. On the east side of the property would be the new Denver park.

Westside has heard from community members that they want "active park uses" within this space, Ho says, including "playgrounds and sports fields."

What, exactly, the park would look like would be determined through a Department of Parks and Recreation planning process. Still, Westside expects to finalize a community-benefits agreement denoting the parks and open space allotment prior to the final city council vote on the rezoning request.

That detention pond, which is part of the Platte-to-Park Hill stormwater drainage system that extends into the City Park Golf Course, serves as an emergency water basin in the event of a once-in-a-century-type flood. The detention area is designed to partially fill up during intense rain, and then fully drain within a few days.

A 25-acre easement covers the detention area, which Westside wants to make part of the park, bringing that entire contiguous open space section to 95 acres. But the actual detention area itself is less than twenty acres, according to Ho.

Buildings cannot be constructed on stormwater detention areas. But with city investment, these areas can be landscaped and used for other purposes.

"It could be part of a walking path or trail, maybe even a jogging trail, but it could be made to look really nice with vegetation, depending on how it’s arranged. It’s not a wasteland, if that’s the concern," says LaMone Noles, a longtime Park Hill resident who in recent years has been a vocal supporter of developing the golf course.

"We know that last winter, folks were sledding in there," Ho adds. "There are plenty of examples throughout the city of detention areas having paths and open space."

The Denver City Council Land Use, Transportation and Infrastructure Committee (LUTI) will vote on the Small Area Plan for the Park Hill Golf Course property on November 8; if approved, it will move to the full council for a vote.  And later this year and early next year, the LUTI committee and Denver City Council will also consider a zoning request and development agreement for the property, which would include the open-space allotment. Simultaneously, Denver City Council would also consider referring a measure to lift the conservation easement to the April 2023 ballot, when many of its members are running for re-election.

While 100 acres of open space is up from the pre-November 2021 election proposal of 60 acres, Yes for Parks and Open Space (aka Save Open Space Denver), which opposed development of the property, isn't satisfied.

"Just because it's grass doesn't mean it's open space. A grass median like you see on Monaco Parkway, that isn't necessarily open space. You aren't encouraging kids to play in the grass median of North and South Monaco," says Penfield Tate, the former state legislator who has been one of the opponents of development on the Park Hill Golf Course property.

Tate, who wants to see all 155 acres turned into a municipal park, suggests that Denver residents have leverage and shouldn't budge.

"They're not giving anybody anything," he says of the developer. "We already own a conservation easement for open space and recreation on all 155 acres now. There's no rush to get this done now. Why don't you let the next administration and city council deal with this?"
KEEP WESTWORD FREE... Since we started Westword, it has been defined as the free, independent voice of Denver, and we'd like to keep it that way. With local media under siege, it's more important than ever for us to rally support behind funding our local journalism. You can help by participating in our "I Support" program, allowing us to keep offering readers access to our incisive coverage of local news, food and culture with no paywalls.
Make a one-time donation today for as little as $1.