Pod Save America Tour Is Coming to Denver

Jon Favreau, Jon Lovett and Tommy Vietor (from left), along with their much-talked-about goldendoodle puppies, prior to a recent video shoot. Facebook
Pod Save America, currently the country's hottest political podcast, is bringing its live tour to Denver in early 2018 in a double bill with its Crooked Media sister program, Lovett or Leave It.

The shows will take place back to back at 8 p.m. and 10 p.m. on Thursday, February 8, at the Buell Theatre in the Denver Performing Arts Complex.

Jon Favreau and Jon Lovett, two of the three Pod Save America stars, along with Tommy Vietor, have names that often get confused with those of showbiz personalities who preceded them into the public eye. But this trio's roots are in progressive politics. Favreau was President Barack Obama's lead speechwriter for eight years; Lovett wrote speeches for Obama, too; and Vietor was a staffer in that administration's communications department.

In March 2016, this crew, along with cohort and fellow Obama administration alum Dan Pfeiffer, came together for a new project: Keepin' It 1600. The podcast was devoted to pummeling Donald Trump and promoting progressive causes, including the candidacy of Democratic presidential nominee Hillary Clinton, in ways that were funny, whip-smart and cheerfully profane. 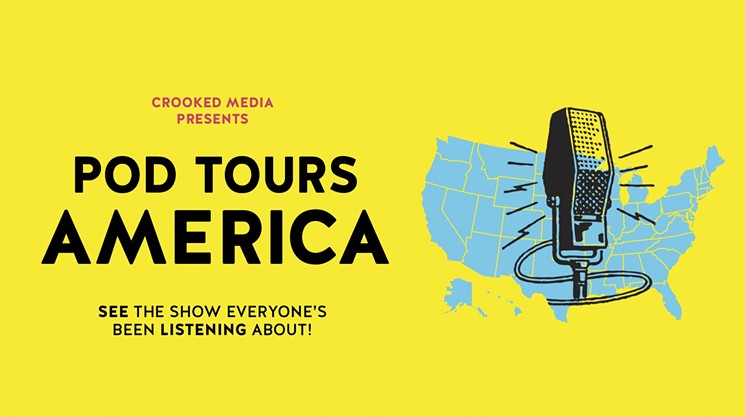 crooked.com
Despite these efforts, Trump won the presidency last November, and the following January, the podcast was rebranded as Pod Save America. According to a New York Times profile headlined "The Voices in Blue America's Head," the podcast had been downloaded nearly 120 million times as of the piece's November 22 publication date — and the article gave an enormous boost not only to Pod, but also to Lovett's spin-off, Love It or Leave It, and other offerings gathered under the banner of their company, Crooked Media.

In addition, Pod Save America has turned into a touring juggernaut, with live shows selling out all over the country, in part because of the high-profile figures who've appeared alongside Favreau, Lovett and Vietor over recent months. Obama himself took part in an early effort, and other participants include other Barry O intimates (White House photographer Pete Souza), possible 2020 presidential aspirants (Senator Kamala Harris) and entertainment-industry heavies (Hamilton's Daveed Diggs, Silicon Valley's Kumail Nanjiani and many more).

Although there's been no announcement yet of guests for the Denver gigs, you can bet that plenty of local Democrats are already lobbying for a seat. But they should be warned: Among the favorite pastimes of Favreau and Lovett, in particular, is to get politicians to curse. And damn it if the results aren't entertaining as hell.

Click to get more information about tickets for the Denver dates.