Pat Poblete was in the press room of the Colorado State Capitol when he was attacked on July 20. 9News via YouTube
On July 20, a woman who identified herself as homeless physically attacked Colorado Politics reporter Pat Poblete in the press room of the Colorado State Capitol simply because he is a journalist. And while Poblete wasn't injured and ultimately declined to ask that the woman be charged with assault — or for stealing items belonging to one of his reporting colleagues, Marianne Goodland — he's troubled that she appears to have acted out because she believes the terrible things said about the media by ex-President Donald Trump, whose rhetoric she spouted during her violent outburst.

"This wasn't the sort of hyper-online, hyper-partisan, QAnon, deep-dive type of person who's ingrained in this stuff," Poblete says. "This was just a woman who'd heard what the former president said about journalists and took that to heart. Even at that level of information and intake, it's still penetrating the public psyche."

Poblete, who publicly revealed the attack in a thread on his Twitter account, is the legislative reporter for Colorado Politics, and even though the Colorado Legislature isn't currently in session, he was at the Capitol to cover an event celebrating a statue of World War II hero General Maurice Rose that will be placed in nearby Lincoln Veterans' Memorial Park (click to see his article on the topic).

"The event happened around ten, and I was writing up a short story. I was the only person there," he recaps. "I heard a voice behind me, and there was a woman kind of poking around the press room. I imagine she just wandered in because it was hot outside. I asked what she did, and she said she was unemployed and living on the streets. Then she asked what I did and where we were, and I said we were in one of the CPA [Capitol Press Association] press rooms, and that set her off. She did the whole Trumpy, nine-yards thing about fake news and how you guys are making up lies and journalism is poisoning the community."

At that point, Poblete continues, "I thought, I don't need to be subjected to this at work, so I asked, 'Can you leave?' and tried to usher her out. And she shoved me, hit me, took a couple of items off Marianne Goodland's desk and stormed out." 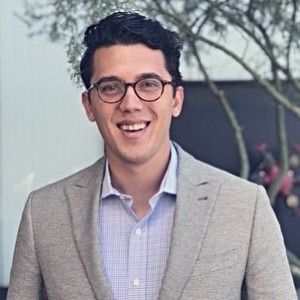 Pat Poblete's Twitter profile pic.
@PatPoblete
Never did Poblete feel in personal danger. After all, he points out, "I'm six-four, I weigh 225 pounds, and I'm a former Division I athlete. This lady was five-four at best and probably weighed 100 pounds. I take harder shots when I play pickup basketball at the Y. So my first thought was that she took some of my colleague's stuff, so I flagged the State Patrol," whose officers are in charge of security at the Capitol. "They got it back and asked me if I wanted to press charges, and I said no. But as I finished the story, I was reflecting back on everything that happened, and all of a sudden, the what-ifs started popping up in my mind. What if she had a gun? What if she had a knife? What if instead of being five-four, she's six-four and trained in MMA? That kind of vitriol against journalists was the underlying piece. The method that it was presented to me as was a small woman who didn't create a threat, but it could have."

Had the woman known more about Poblete's employer, she might have found another target for her anger, since Colorado Politics is affiliated with the Colorado Springs Gazette and its online sister publication, the Denver Gazette. The Gazette was among the few mainstream newspapers in the nation to endorse Trump's 2020 presidential bid.

As for how the woman got inside the press room, the explanation is simple: Poblete had left the door open, as is common practice among reporters. The entrance to the office is just past the security checkpoint at the building's public entrance, and although keeping the door locked would be a pain given how often journalists come and go, particularly when the legislature is in session, Poblete now says, "Maybe that's something that should be looked at moving forward."

In the meantime, Poblete wishes he knew how to repair the damage done by the-media-is-the-enemy-of-the-people mindset that's been adopted by so many angry, aggrieved individuals.

"There needs to be a greater level of respect everywhere," he says. "But that just isn't a satisfactory answer. When disrespect and breeding this division and hate is the political currency of the day and it wins you power, I don't know how we can just back away from it."

He isn't sharing his experience because he's "looking for sympathy," he notes. "I wasn't physically harmed, by any means. But I just wanted to let people know these are the types of challenges journalists face on the day-to-day, and we just have to do better at this as a society. We have to do better."
KEEP WESTWORD FREE... Since we started Westword, it has been defined as the free, independent voice of Denver, and we'd like to keep it that way. With local media under siege, it's more important than ever for us to rally support behind funding our local journalism. You can help by participating in our "I Support" program, allowing us to keep offering readers access to our incisive coverage of local news, food and culture with no paywalls.
Make a one-time donation today for as little as $1.